Vedanta Resources Plc and Vale SA led declines in industrial-mining companies as Chinese investors returning from a public holiday drove iron ore to a seven-month low. Nickel traded near its lowest in a year after Indonesia’s largest producer started shipping ore to China.

An index of 18 producers tracked by Bloomberg Intelligence headed for a third straight loss, with Vedanta dropping 5.7 percent and Rio de Janeiro-based Vale sliding 5 percent. Earlier, a 6.5 percent slump took iron ore to 424.5 yuan ($62.3) a metric ton on the Dalian Commodity Exchange amid signs of ample supply. The September contract finished May down 19 percent, in the longest run of monthly declines since November 2015.

“The fundamentals in iron ore are relatively weak but the selloff is more to do with speculative traders’ positions,” Xiao Fu, an analyst at Bank of China International Global Commodities, said by email. “The bears are winning at the moment.”

Nickel, the worst performer on the London Metal Exchange this year, dropped as much as 3.2 percent to $8,825 a ton. It settled at $8,970 a ton at 5:51 p.m. in London. PT Aneka Tambang confirmed it had started shipping low-grade nickel ore to China on the recommendation of Indonesia’s Energy and Mineral Resources Ministry, easing a supply crimp seen since the country’s government placed a ban on exports in 2014. 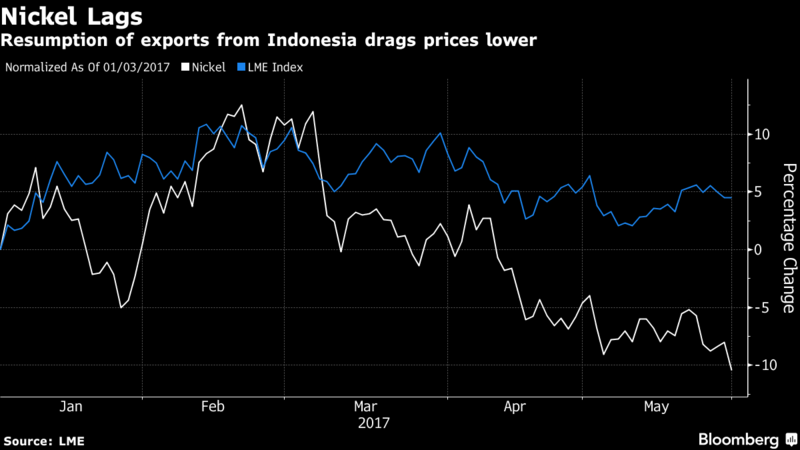 PT Antam, as the miner is known, has shipped 165,000 wet metric tons of ore to China, and is preparing its next shipment. The company has a license to export 2.7 million tons of ore from Indonesia, which was the world’s largest nickel ore supplier prior to the 2014 ban.

“For base metals, the fundamentals are comparatively better than iron ore,” Fu said. “The outlook for nickel is less positive though, given that Indonesia is already shipping out nickel ore,” she said.

Base metals gained earlier after a positive reading from China’s manufacturing sector. The official purchasing managers’ index was stable at 51.2 in May, beating a median estimate of 51 in a Bloomberg survey of economists.
Zinc Concerns

Zinc dropped 1 percent to settle at $2,600 a ton in London, after touching its lowest level in nearly two weeks. Copper fluctuated before settling 0.5 percent higher at $5,682 a ton. Supply concerns have lent support to the contract during the selloff, BOCI’s Fu said.

Freeport-McMoRan Inc. last week said a “large number” of striking workers at the Grasberg mine in Indonesia were deemed to have resigned after failing to report to work. On Tuesday, the Australian Financial Review reported that Glencore Plc had written a letter to the Australian prime minister stating that the viability of its copper operations in Queensland state is in doubt due to high energy, labor, rail and freight costs.

Aluminum rebounded to settle 0.1 percent higher after falling as much as 0.9 percent to an almost two-week low of $1,909 a ton. The metal could come under “severe short-term pressure” ahead of the monthly declaration of options contracts next week, Malcolm Freeman, a director at Kingdom Futures in Kent, England, said in an emailed note. There are 3,659 put options with a $1,850 strike price and 6,056 puts at $1,900 open against the June contract, bourse data show.
Source: Bloomberg