The Venezuelan government has announced the expansion of Chinese investment in the country’s oil industry, with the aim of increasing production by 120,000 barrels per day.

The investment, which authorities say is worth US $3 billion, financed the construction of a new oil blending plant inaugurated last Thursday as the first part of the two-stage plan.

The “Jose” plant, which is located in Barcelona, Anzoátegui State, is to be run by the Sinovensa joint venture, which is 49 percent owned by China’s National Petroleum Corporation (CNPC) and 51 percent by Venezuela’s PDVSA state-run oil company. The facility will blend extra-heavy grades from Venezuela’s Orinoco Oil Belt into the exportable Merey crude, which is popular in Asian markets.

Sinovensa currently produces 110,000 barrels per day (bpd), a figure which officials claim will increase to 165,000 bpd with the addition of the new blending plant. The second stage of the project is expected to increase this figure to 230,000 bpd, but no further details have been disclosed so far.

The news follows the conversion of the Petropiar extra-heavy crude upgrader plant into a blender facility earlier this month. Petropiar is projected to produce an additional 130,000 bpd of Merey crude, making the lighter blend Venezuela’s primary export.

It has also been reported that Caracas has signed a repair and maintenance contract with Shanghai-based contractors Wison Engineering Services.

According to Bloomberg, the servicing work on Venezuela’s refineries is due to take between six months and a year and will be paid for in oil products, including diesel. It is unknown which refineries will benefit from the maintenance.

The influx of Chinese funding comes only a week after Washington announced an embargo against all trade with Venezuelan state entities and associates. The escalation has been criticised by the international community, including most recently by UN High Commissioner for Human Rights Michelle Bachelet, who expressed concern over the “potentially severe impact on the human rights of the people of Venezuela.”

Washington has repeatedly threatened Beijing and Moscow to suspend their close relations with the Maduro administration, with US National Security Advisory John Bolton vowing secondary sanctions against Russian and Chinese companies that violate the embargo.

Beijing has dismissed the threat against its firms as “psychological terror” and “grave interference,” while Venezuelan Oil Minister Manuel Quevedo promised to “fight the blockade with everything [we have].”

Venezuela’s oil industry has collapsed in recent years, with output stabilising around 750,000 bpd since April, well down from the average 1.3 million bpd produced in 2018.

A combination of problems – including mismanagement, underinvestment, and the 2017 US ban on new lending – were exacerbated in January when the White House announced an oil embargo and froze the country’s US-based CITGO refineries, limiting Venezuela’s access to diluents and other products needed to process crude oil. 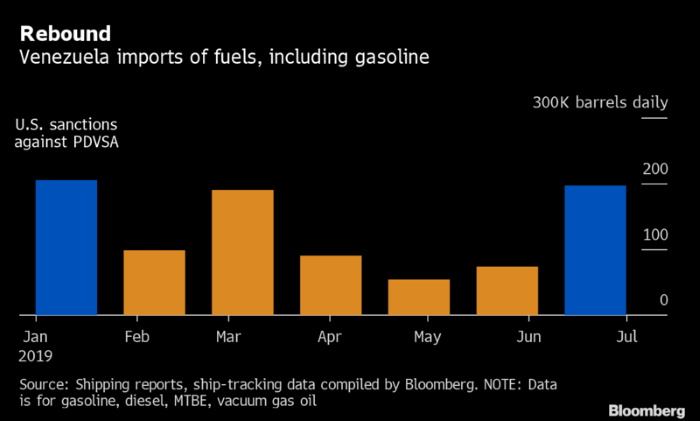 In recent months, fuel shortages have hit parts of the country as PDVSA has struggled to satisfy the estimated 250,000 bpd of domestic demand, forcing the country to import more fuel.

Bloomberg reported this week that fuel imports during July were more than double those of June, continuing a recent upward trend.

According to shipping reports and data compiled by the wire service, Caracas imported 196,000 bpd in July, the highest figure since January. The oil is believed to come principally from Russia’s state-run firm Rosneft firm via Greece and Malta.
Source: Bloomberg