PwC’s Director, Mr. David Smith writes about the significantly higher interest from venture capital, towards the field of maritime technology.

Venture capital interest in maritime technology has grown significantly in recent years. As barriers to adoption fall, there is still scope for even higher levels of investment.

Historically, the maritime sector was an enthusiastic adopter, indeed pioneer, of new technology. However, there is a widespread perception within the industry that, in recent decades, shipping companies have been slow to capitalise on the benefits of new software and emerging digital technology. There are multiple factors which have acted as barriers to faster uptake, which can be divided into ‘push’ and ‘pull’ barriers. ‘Push’ barriers are those which have prevented those from outside of the industry from developing technology solutions focused on the maritime sector, while ‘pull’ barriers are those which have blocked participants in the sector from adopting new technology.

The last couple of years however, have seen renewed interest, with a clear uptick in discussion of maritime technology, both in our client conversations and public events such as conferences. This can also be seen in terms of the degree of venture capital investment in the sector, which has grown from almost zero a few years ago to reach c. $300m in 2018. 2019 saw a further increase, entirely driven by the $1bn investment in Flexport by the Vision Fund, making it the first maritime unicorn (or narwhal?). 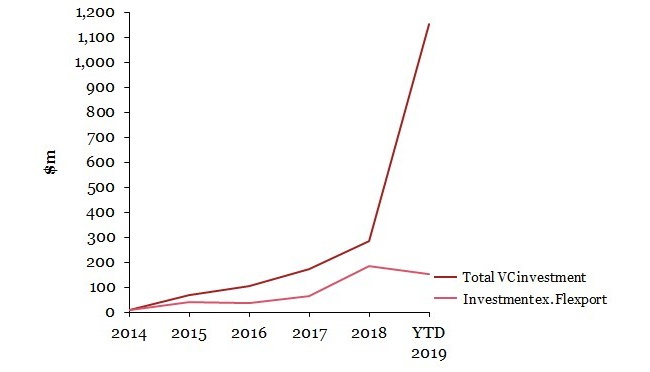 This growth in investment reflects the fact that many of the ‘push’ barriers outlined above have declined in importance. For example, a mix of maritime focused VCs and accelerators, combined with increased government interest in maritime in several countries, has raised the profile of the sector as a destination for technology investment. At the same time, vessel connectivity is improving rapidly as satellite broadband becomes more widely adopted.

Some analysts have seen the spike in 2019 as a one off which is unlikely to be sustained in the long term. This view has been enhanced by the recent events at WeWork which have called into question the outsize investments which the Vision Fund has been making into individual companies. However, as Figure 2 shows, putting current investment levels into the context of the overall importance of the maritime sector to the global economy shows a different picture. 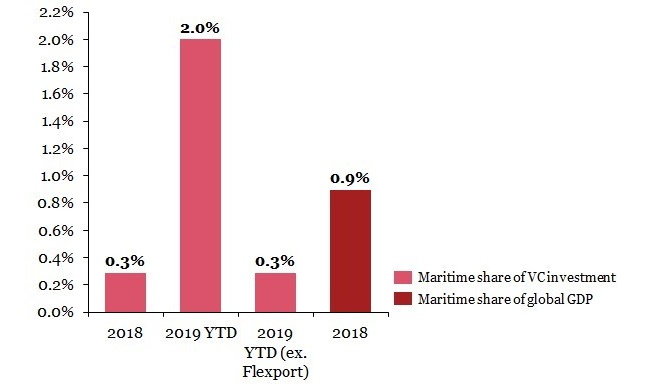 Despite the rapid growth in venture capital interest in maritime in recent years, investors have still been significantly underweight the sector relative to its share of global GDP. To reach parity, we could expect to see three times the level of investment we saw in 2018 going into the sector every year. Alternatively, the sector is large enough to justify a Flexport style ‘mega-deal’ every couple of years.

Of course, sectors do not automatically ‘revert to the mean’ and, as outlined above, there have historically been good reasons why maritime has attracted less startup investment than other industries. However, as these barriers continue to reduce, we should see strong growth in venture deal volume and value. Less clear is the extent to which shipping companies will adopt this new technology, given that many of the ‘pull’ barriers identified above remain in place.