Short Shipping supply got further squeezed for exporters in 2022 due to chronic land side congestion at major ports and terminals in Europe, reducing PCTC (Pure Car Truck Carrier) ship call frequency and therefore capacity. Terminal space completely maxed out in August at major hubs in the Med and Northwest Europe, including Bremerhaven, Zeebrugge and Antwerp, resulting in record delays for Vehicle Carriers on main Transatlantic and Asia to Europe liner services (as shown in Figure 1.1).

A shortage of truck drivers, dockers, microchips, and ships meant cars stayed in ports for longer, leaving no space for new deliveries. PCTC supply was already short entering into 2022, based on historically low vessel orders from 2016 averaging four units per year, followed by excess scrapping in year one of Covid-19. This left the sector in a perilous state to cope with any demand spikes or sustained periods of congestion, both of which materialised last year and widened the supply demand imbalance, pushing up rates and values. 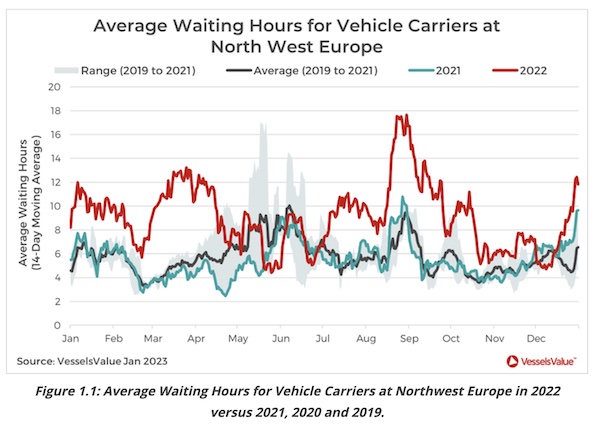 2022 was a golden year for tonnage providers realising impressive stock gains from highly profitable charters, which went into overdrive after Lake Geneva (6,178 CEU, Jan 2015, Imabari) was extended to Nissan for 100,000 USD/Day in August on a twelve month deal. The same ship was fixed out at 40,000 USD/Day to Glovis at the end of 2021, equating to a +150% increase inside nine months. Charterers were forced to take vessels on longer three and five year deals, at loftier day rates as 2022 closed, whilst demolition was virtually non existent based on general PCTC scarcity.

Sentiment has turned soft as per one leading shipowner this month, citing recessionary headwinds destructing sales demand. However, we are not seeing any softening in values yet. On the contrary, charter rates continue to edge higher supporting higher values.

Short supply fundamentals have another twelve months to play out possibly longer, until the sector is rebalanced by an armada of deliveries expected in 2024 and 2025, This will almost certainly bring down freight rates and asset values, unless China continues its amazing growth trajectory. The top of the cycle is near, but we are not quite there yet. 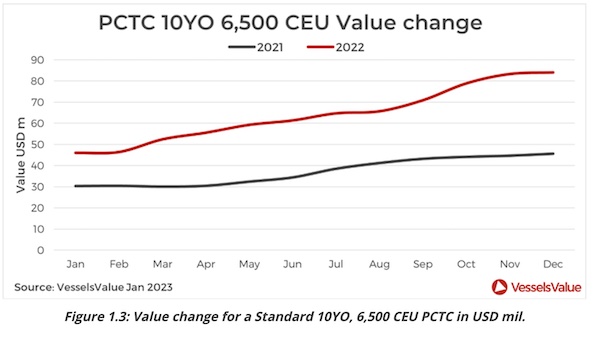 The biggest deals for S&P revolved around 10 to 15 YO Midsizes built in China. Hoegh Maputo (4,900 CEU, July 2011, Xiamen Shipbuilding) and Hoegh Singapore (4,900 CEU, November 2011, Xiamen Shipbuilding) were snapped up for USD 39.5 mil each by Neptune Lines in February, compared to VV values of USD 33.15 mil each the day before sale. Seen as high prices at the time, they have since proved to be shrewd acquisitions. 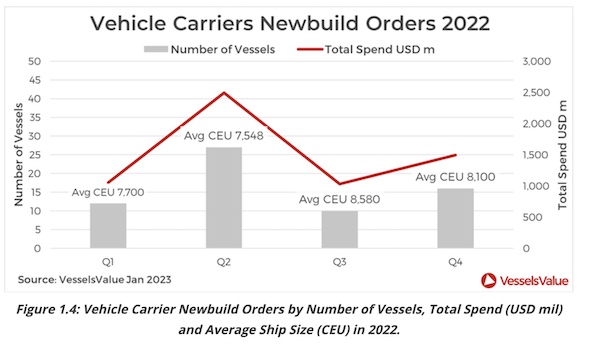 Other headline deals involved purchase options triggered by Hoegh. Large Car Truck Carrier Hoegh Tracer (8,500 CEU, March 2016, Xiamen Shipbuilding) was purchased from Ocean Yield for USD 53.2 mil in August. A bargain deal for one of the largest ships on the water which must have pleased shareholders. The fourth bareboat chartered vessel which Hoegh declared options to buy. VV valued this ship at USD 91.08 mil on the 1st of August. It could have earned more from the charter market, if Hoegh could afford this luxury.

Bullish sentiment firmed month on month (MoM) for deepsea assets, up +84% for the year based on a standard 10YO 6,500 CEUs. This was on top of +50% growth achieved in 2021 (figure 1.3). A red hot charter market firmed higher in November after Midsize Lake Kivu (4,902 CEU, November 2006, Xiamen Shipbuilding) was fixed out rather than sold, at 75,000 USD/Day for three years to Suardiaz, earning tonnage provider EPS a cool USD 82 mil for the period.

Total vessels ordered up +20% based on 65 ships confirmed

Increased EV trade growth forced shipowners to order larger ships in 2022. Electric Vehicle demand continues to transform the fleet because unit weights are heavier, and dimensions are generally wider than legacy ICE (Internal Combustion Engine) units, determining more capacity is required to carry the same number of cars around the world because of deadweight. 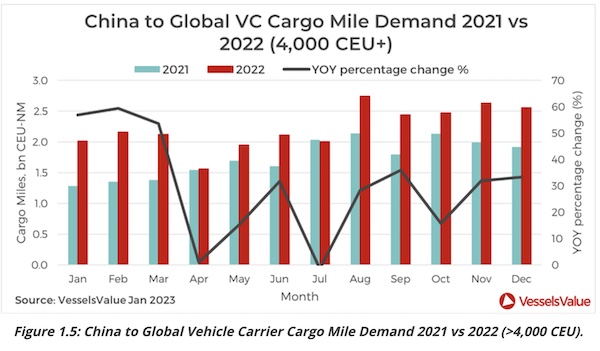 Additionally, no Smalls or Midsizes were ordered, which is ominous for intraregional supply in Europe and Asia. Investment was squarely focussed on deepsea ships, averaging almost 8,000 CEU in size (as shown in Figure 1.4).

Paradoxically, freight rates firmed higher despite reduced service levels for shippers, from reduced supply. PCTCs got sucked into China deepsea trades at the expense of other less attractive routes, including 3,000 to 4,000 CEUs typically employed at an intraregional level.

Over the course of the year, 15YO assets more than doubled in value as per VV’s matrix (which displays values for standard vessels across different ages).

OEMs must sit tight for another 12 months until PCTC deliveries sufficiently replenish supply to catch up to demand, continuing to look at all logistics alternatives in the meantime

Vessel number deliveries will add +3% growth to the fleet in 2023. Demolition is expected to stay ultra low, thus a supply uptick looks firm. However, LV sales and production forecasting is also projecting similar growth of +4%, closely tied to export volumes on PCTCs. Further support for “more of the same” arrives from reoccurring port congestion in Europe, and CII gradually slowing fleet speeds

Overall, fundamentals are not going to change that much in 2023, supporting continued high rates and values until 2024 when supply finally receives a major injection of CEU capacity. 2023 will be the last year of this super cycle 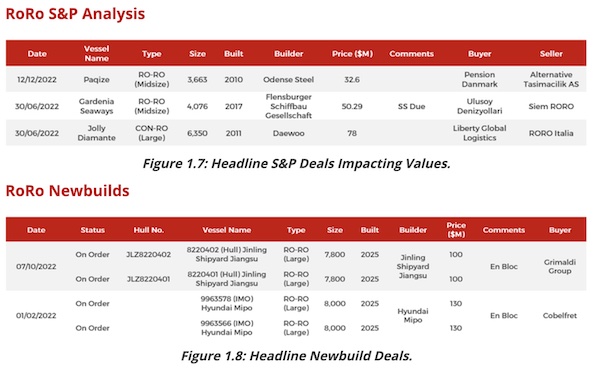 In S&P, Midsize Gardenia Seaways (4,076 LM, July 2017, FSG) was sold BBHP (Bareboat Hire Purchase) by DFDS to Ulusoy in June for EUR 48 mil. Although not a straight sale, a good reference point for cousins in the sector. Whilst for Smalls, scrubber fitted Color Carrier (1,775 LM, January 1998, Damen Galati) was sold by Color Line to CLdN for EUR 12.5 mil in November. A high price for a 25YO asset showing demand remains firm for vintage units in main market Europe.

In the deepsea segment where less than 10% of the fleet trades, ConRo values rocketed from a red hot charter market. Large assets with capacity to carry +2,000 cars, in addition to dedicated Lane Meter and Container capacity, firmed by +25% in value from exceptionally strong PCTC earnings built into VV’s model. The market realised how valuable deepsea ConRos had become when Jolly Diamante (6,350 LM, 3,001 TEU, December 2001, Daewoo) was sold by RORO Italia / MSC to Liberty Global Logistics for USD 78 mil in June. An impressive price for an 11YO asset, comfortably eclipsing the USD 70 mil order price paid by Ignazio Messina to Daewoo shipyard back in December 2009. 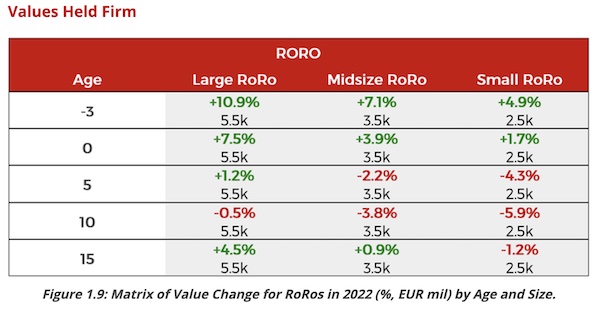 Nine month revenue results released by stock listed Finnlines (+31%), a subsidiary of Grimaldi Group, and DFDS (+61%) showed that Is was a solid year for RoRo operators. RoRos were one of the quickest ship types to recover from the pandemic, and remain a safe bet for investors relative to other sectors including Ferries, based on more stable market fundamentals.

Demand should soften in 2023 according to one leading European operator this week, continuing trends from the second half of 2022. However, recent fixtures suggest otherwise showing firm demand for assets across all ages and sizes, especially scrubber fitter units based on more favourable diesel prices, supporting earnings and values

Shipowners are setting higher asking prices for 5YO and 10YO RoRos in the 2,000 LM and 4,000 LM size range which is positive for values. Further support arrives from OEMs such as Ford switching over to Small RoRos as an alternative to Vehicle Carriers chronically short on supply.

Balanced supply demand fundamentals, decreased inflationary pressures across Europe, and strong demand for car capacity by OEMs are likely to support RoRo earnings and values into 2024. RoRos continue to be a safe bet for investors
Source: VesselsValue