A looming fall in VLCCs’ availability in the Middle East over the coming weeks could help boost the freight rate market in the weeks to come. According to the latest weekly report from shipbroker Charles R. Weber, “VLCC rates moved broadly higher this week as participants reacted to a narrowing Middle East availability surplus that materialized during January’s last decade loading program. The gains came despite a slowing of demand in the Middle East as draws on the region’s positions to service West Africa demand rose for a third consecutive week. The Middle East market observed 20 fresh fixtures, representing a 46% w/w decline. Meanwhile, demand in the West Africa market inched up by one fixture to a one‐month high of ten. Average earnings on AG‐FEAST routes surged 93% y/y to ~$20,411/day”. 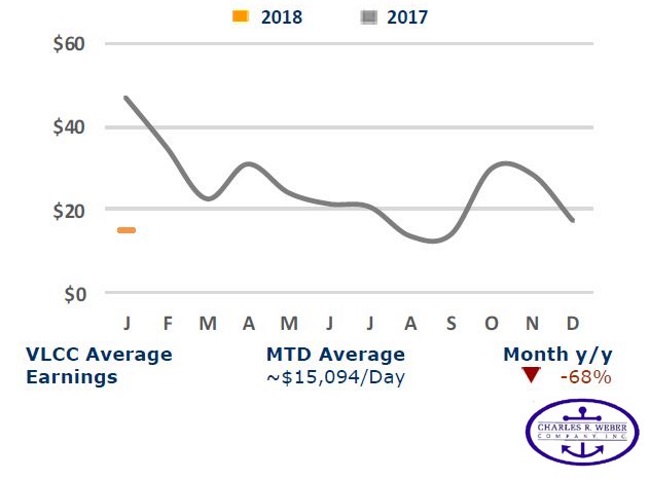 According to CR Weber, “the supply/demand positioning appears set for successive further narrowing during the first half of the February program. We presently project that, net of draws to the Atlantic basin, Middle East availability will decline from January’s end‐month surplus of 16 units to 14 units at the conclusion of February’s first decade. Looking further ahead, the surplus could drop to 9‐11 units by mid‐February (though we note that there is greater uncertainty around mid‐month availability given the potential for “hidden” positions and/or a weakening of West Africa demand). Nevertheless, the 14 surplus units projected at February 10th represents the lowest surplus since November, when AG‐FEAST TCEs averaged ~$27,698/day, implying that there is further upside potential. Indeed, based on the first decade’s supply/demand positioning, our model suggest an AG‐FEAST TCE of around $25,000/day. An expected increase in Middle East demand during the upcoming week should allow owners to capitalize on the improving fundamentals, though it remains to be seen how a high presence of commercially disadvantaged units will influence rate progression. These units represent 29% of the position list through February 10th and 24% of the position list through February 15th.  A most likely scenario is for a wider rate differential between competitive and disadvantaged units, though this is subject to a normal distribution of inquiry between requirements that can and cannot work disadvantaged tonnage”, said the shipbroker. 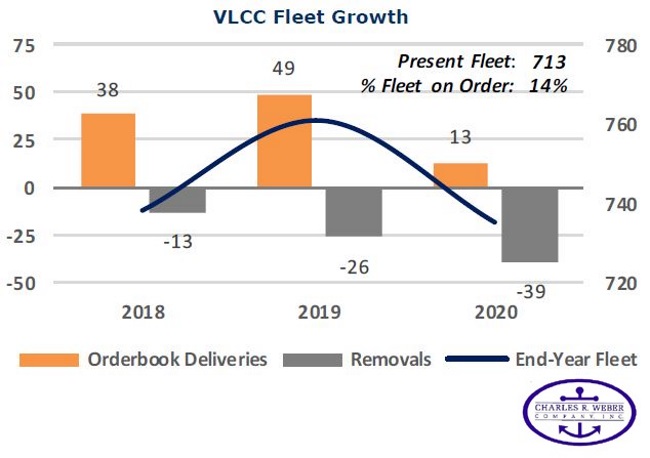 In the Middle East, CR Weber noted that “rates to the on the AG‐JPN route surged 10.9 points to conclude at ws48.5 with corresponding TCEs rallying 91% to ~$21,921/day. Rates to the USG via the Cape added 2.5 points to conclude at ws22.4. Triangulated Westbound trade earnings rose by 17% to ~$20,340/day. In the Atlantic Basin, rates in the West Africa market were stronger in line with the trend in the Middle East. Rates on WAFR‐FEAST routes added 4.6 points to conclude at ws48.4. Corresponding TCEs rose by 30% to ~$18,572/day. Rates in the Atlantic Americas market continued to pare early‐month losses in line with last week’s improvement in demand and improving overall VLCC sentiment. The CBS‐SPORE route added $100k to conclude at $3.50m lump sum. Round‐trip TCEs on the route rose 9% w/w to ~$16,385/day”, the shipbroker concluded. 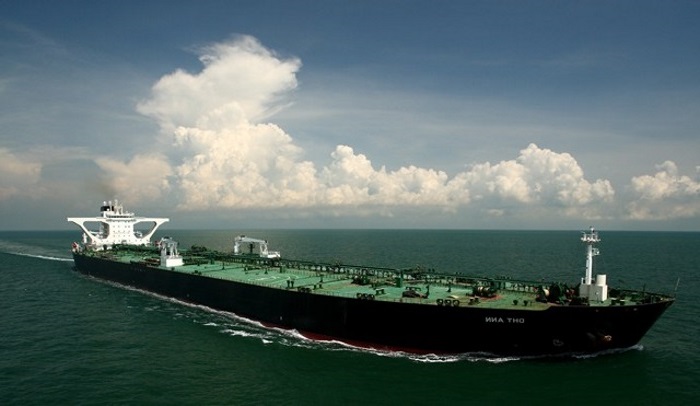 Meanwhile, in other tanker segments, “the West Africa Suezmax market was modestly stronger this week a charterers were busy working cargoes in January’s final decade, during which the spot cargo availability for Suezmaxes was at a one‐month high.  Rates on the WAFR‐UKC route added 2.5 points to conclude at ws57.5.  The positive direction of rates appears to have been arrested by a progression into early February dates, within which availability levels appear to have inched up slightly. Rates in the Caribbean/USG market were slightly softer at the close of the week after regional demand declined 25% w/w and the class’ $/mt premium to regional Aframaxes undermined demand for intraregional Suezmax voyages. The CBS‐USG route shed 5 points to 150 x ws60 while the USG‐UKC route was unchanged at 130 x ws52.5”, CR Weber said.
Nikos Roussanoglou, Hellenic Shipping News Worldwide

Previous: Shipbuilding In 2017: Any Signs Of Improvement?
Next: Chinese iron ore and steelmaking prices January 23 2018