A ground-breaking piece of equipment which could save the maritime industry billions of dollars is being launched by a Warwickshire company.

BLOK Container Systems’ BLOK Spreader, enables four empty shipping containers to be lifted and transported on to quaysides as a single block, potentially easing congestion in container ports all over the world, as well as reducing emissions and saving billions across the industry.

BLOK Container Systems has worked with the Coventry & Warwickshire LEP Growth Hub and Coventry City Council and to help fund development of the BLOK Spreader, with the two organisations working together to secure a £100,000 grant from the European Regional Development Fund.

The company was started just two years ago by Martin Clive-Smith, Henry Reynolds and Selwyn Rowley, who have a combined experience of more than 80 years across engineering and marketing. 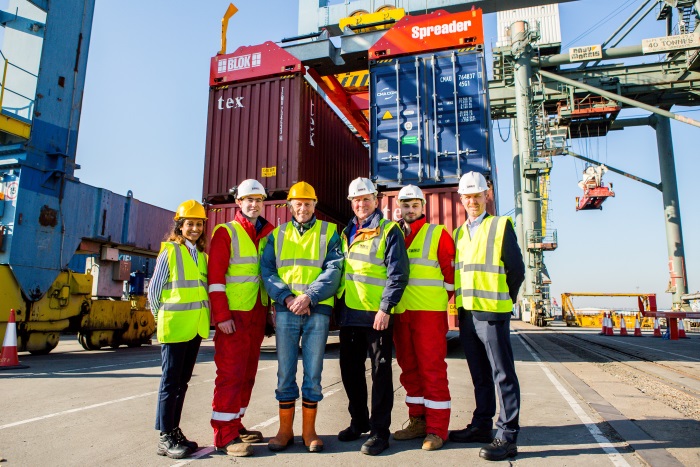 Jaymie Thakordas, account manager and business mentor with the Growth Hub, said: “The reputation and clarity of vision possessed by the BLOK Container System team is inspiring and we are excited to see just how big an impact their work can have on the maritime industry.”

Selwyn Rowley, BLOK’s director of sales and marketing, said: “As engineers, Martin and Henry have an impeccable track record and Martin is responsible for more than 140 patents and $2bn sales of container industry products used the world over.

“This is a major innovation that is going to change the maritime sector – it is perhaps the biggest step forward since the introduction of the shipping container as multiple container handling has the potential to revolutionise port handling systems.

“Ports around the world handle 679 million containers annually of which around 24 per cent are handled empty.

“Container terminals charge at least £100 and often much more a lift, so the potential savings created by being able to move four at a time rather than one run into the billions.

“We have interest from ports around the world, as well as many country members of the International Maritime Organisation.
“We are confident that this is going to have a huge global impact.

“Ships have become bigger now and carry as many as 20,000 containers but that volume has exacerbated delays at ports and more efficient handling is required. The price of fuel is also going up and tough new environmental standards are being introduced so time savings are essential to allow for slower sailing.

Councillor Jim O’Boyle cabinet member for jobs at Coventry City Council and regeneration and LEP board member said: “This is an incredible project carried out by a highly credible team.

“We didn’t just give this grant out with the short-term in mind, and this has the potential to be a game-changer for ports in the longer term.”
Source: Coventry and Warwickshire LEP Growth Hub

2019-03-14
hellenicshippingnews..
Previous: India: Coal Imports By State Power Plants Up In FY19
Next: ‘Nigerian ports may lose 40% of cargoes this year’