The ongoing weakness in Turkish economy and corresponding depreciation in Lira is making the country’s imports expensive. From the beginning of the second quarter, the Lira has depreciated by more than 50% against the US dollar and in addition, Turkey is also facing a trade tussle with the US. So what are the prospects for Turkish external trade and the shipping industry?

The one thing that is certain is that the outlook is far from uniform and there are quite profound differences by sector.

On steel products the US government has recently doubled the import duty on Turkish steel to 50%. However, we believe any damage from tariffs will only be short term, because:

-Despite the higher import duty on Turkish steel products, high steel prices in the US and the depreciation in Lira will help keep Turkish exports competitive, thereby capping any significant decline in this trade.
-Despite the fact that the US is one of the major destinations for Turkish steel exports (11% of total Turkish steel exports of 14.6 million tonnes in 2017), Turkey is likely to find alternate buyers in Europe, the Middle East and Africa. Moreover, a slight change in the country’s steel trade pattern is unlikely to bring any significant change in trade in terms of tonne-mile demand. 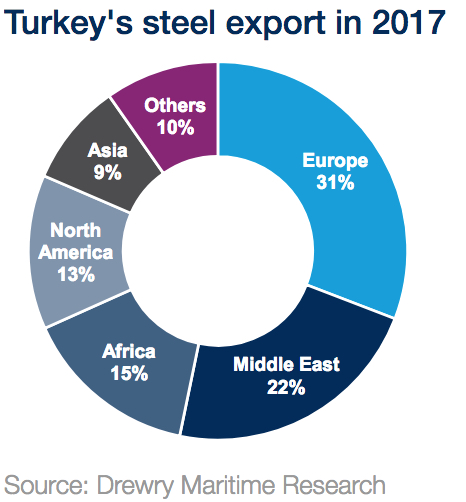 Similarly, the recent imposition of a retaliatory tariff on US coal by Turkey is also unlikely to affect global coal trade, as Turkey imports only 6% of its total coal imports from the US. Moreover, Turkey can easily replace US coal with coal from Canada and Australia, with little or no impact on tonne-mile demand.

However, a depreciating Lira will make Turkey’s imports of thermal coal more expensive. Turkey meets about one-third of its electricity needs from coal, and more than 90% of the domestic coal reserves are low in calorific value (<3,000 kcal/kg). It is therefore dependent on imports of high calorific value coal and this is unlikely to change in the short term irrespective of import prices. So should the Lira remain weak for a prolonged period it will eventually start to have a negative impact on energy and coal demand. 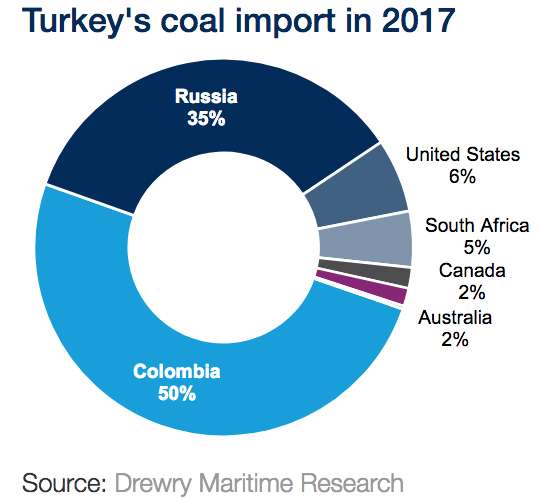 Other than the commodities mentioned, Turkey is also active in grain and petcoke trade. The milling industry consumes wheat for flour processing and then exports to countries such as Iraq, Syria and Angola. Similarly, petcoke is used in the cement industry as Turkey is one of the top exporters of cement and clinkers – in fact the third largest exporter after Thailand and China. In this respect the depreciation of the Lira will help to keep its exports of final products competitive.

On the liquid side the two main products that we have focused on are LPG and LNG:

As LPG is not in the current list of US exports tariffs, the ongoing trade war is unlikely to affect the LPG trade between the two countries. Turkey imported 13% of its total LPG imports from the US in 2017. Even if the recent hostility between Turkey and the US extends to LPG, Turkey is likely to find alternative suppliers in the Middle East. In short, we do not expect the trade dispute to have any significant impact on global LPG trade and tonne-mile demand considering small nature of current US-Turkey LPG trade.

Similarly, Turkey is highly dependent on imported natural gas as it does not have any domestic reserves, and demand is expected to continue rising as part of its clean energy plan. However, the US accounts for a very small share of Turkish imports and alternative suppliers such as Algeria, Nigeria and Qatar would be in a position to replace US LNG exports to Turkey in the event that it becomes part of the trade war.

No impact on upcoming regasification capacity

The ongoing currency crisis and tension with the US will not have any impact on Turkey’s regasification capacity expansion plans either. There is no delay in Trans-Anatolian Natural Gas Pipeline (TANAP) project, which will start transporting gas from Azerbaijan to Turkey and other European importers by the start of 2019.

Currently, Turkey has a regasification capacity of 14 mtpa, and the country plans to expand it further, as this will help to diversify import sources. Two new FSRUs in Hatay, southern Turkey and Saris Bay, in northwest Turkey will be operational by 2020. 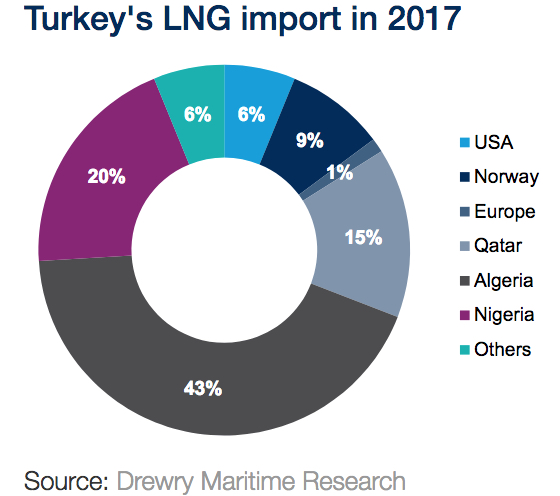 Previous: Tanker Market: VLCCs Looking for New Direction
Next: Tankers: It’s All About Demolition Activity In The Hunt For VLCCs’ Rebound