Deteriorating prospects for global demand in 2023 will add to external risks for many African sovereigns by dampening export prospects, says Fitch Ratings. Nonetheless, risks will vary across our rated portfolio.

Fitch now expects global GDP to grow by just 1.7% in 2023, down from our previous forecast of 2.7% in June 2022. Growth in the US and eurozone will be close to 0%. Growth in China, at 4.5% in 2023, will be stronger than the 2.8% that we expect this year, but will still mark a relatively weak recovery. Poor growth prospects in these three economic blocs will constrain export prospects in other markets, including those in Africa. It could also depress export-oriented investment in Africa.

The deterioration in export prospects for 2023 comes against a backdrop of broader global financing pressures, with higher interest rates and the stronger US dollar posing challenges for many emerging markets. This has meant many African sovereigns have lost access to international debt markets this year. Weaker exports earnings will add to external financing strains and could put downward pressure on ratings for some African sovereigns, particularly where external buffers are low.

The biggest impact on goods exports for most African sovereigns will come from the growth shock from Europe’s gas crisis. The median average share of exports to the EU among our portfolio of publicly rated African sovereigns was around 21% in 2021, compared with 10% for China and 3% for the US. Shipments to the EU account for a particularly high share of goods exports in Cabo Verde (B-/Stable), Morocco (BB+/Stable) and Tunisia (CCC).

Export exposures to the US, by contrast, are generally relatively low, with only a few exceptions such as Lesotho (B/Stable) whose garment export earnings could be affected by weak demand in that market.

Export exposure to China varies among African sovereigns, but is significant for several. The export percentages in 2021 were above 20% in Angola (B-/Positive), Cameroon (B/Stable), Republic of Congo (CCC+), Gabon (B-/Positive), Ghana (CC) and Namibia (BB-/Stable).

In all of these, oil forms a large proportion of exports to China, except for Namibia. We expect oil prices will fall to USD85/bbl in 2023, from USD100/bbl in 2022, which will lower their export revenues. Some African oil exporters are also facing production difficulties that drag on export volumes – Nigeria (B/Stable), in particular, has seen a significant drop in oil output in recent years. Poor growth prospects in China’s construction sector could also dampen other commodity exports, such as copper from Congo, Namibia and Zambia (RD); iron ore from South Africa (BB-/Stable); and wood from Gabon, Cameroon and Congo. Gabon’s manganese ore exports could also be affected. 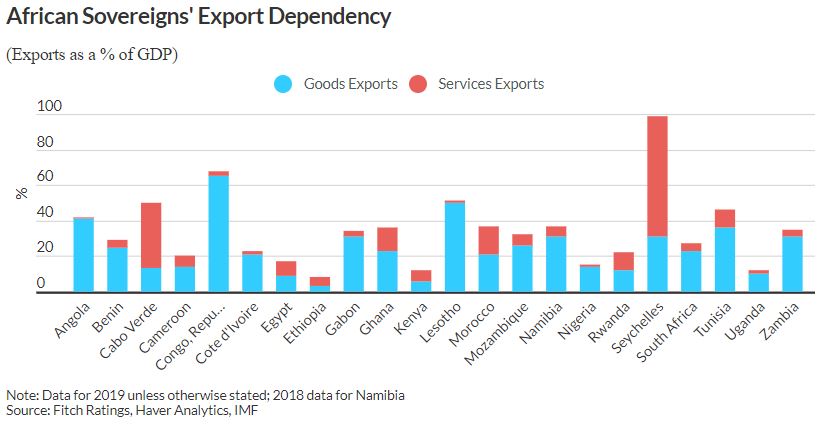 Nonetheless, this would come after relatively high prices for many commodities in 2021-2022, and for oil USD85/bbl still represents a high price. The windfall has supported several African sovereign ratings, and in the case of Angola, Congo and Gabon has contributed to positive rating action.

The region’s growth exposure to weaker external demand is mitigated in most cases by low export-dependency. The median ratio of goods exports to GDP among rated African sovereigns stands at around 23%, and above 50% only in Congo and Lesotho.

Services exports have been badly affected in most countries by the impact of Covid-19 on tourism, but are usually significant in the Seychelles (B+/Positive), Cabo Verde and, to a lesser extent, Ghana, Morocco and Tunisia. In these countries, the potential uplift to foreign-exchange earnings from the resumption of normal tourism flows is likely to be weakened by the gloomy global economic outlook, and in particular by the shock to EU demand.
Source: Fitch Ratings