Weathernews Inc. has developed the “NAR (Navigation Assessment & Routeing) Service” for the marine transport industry to support countermeasures against grounding incidents, one of the most serious types of marine accidents. This is the first service in the world that automatically detects and sends out notifications to shoreside operators/managers and related organizations on the risk of ship grounding. It automatically transmits alerts based on shipping route data when a ship is planning to or actually approaches/navigates towards high-risk areas like shallow waters or areas with fishing fleets, or when it drifts from a planned route. Weathernews plans to launch this service in May 2021. We are expecting for it to be adopted by ship owners and ship management companies, and primarily by major international shipping companies located both in Japan and abroad.

In addition, Weathernews will gradually release various “Environmental Operation Support Services” through 2022 to support environmental contributions for shipping, such as the reduction of greenhouse gas emissions. In addition, we have positioned this service as the first step in our “Environmental Operation Support Services” since support for grounding risk is linked not only to safety countermeasures, but to the protection of the marine environment as well.

The world’s first “Grounding Risk Support Service” which notifies marine transport shoreside operators/managers of grounding risk
In recent years, marine accidents have been occurring frequently all over the world, and accidents from grounding are some of the most serious of these. While the current practice in the marine transport industry is to leave the decisions on how to sail in shallow water areas up to those actually on the vessel, it is said that one of the causes of the aforementioned accidents is the occurrence of human error due to the increased workload on the crew members. Due of this, there is a need for shoreside operators/managers who monitor ship movement and passage risk to grasp the risk of ships becoming grounded.

However, the main issue is that there is currently no system in place for those on land to grasp the risk of ships becoming grounded, and it is difficult to pick out which ships are at risk from the many ships out there at any given moment in real time. It is because of this that Weathernews has developed the world’s first “Grounding Risk Support Service” that automatically detects and sends out notifications on the risk of ships becoming grounded to shoreside operators in order to improve upon safety monitoring support from land. 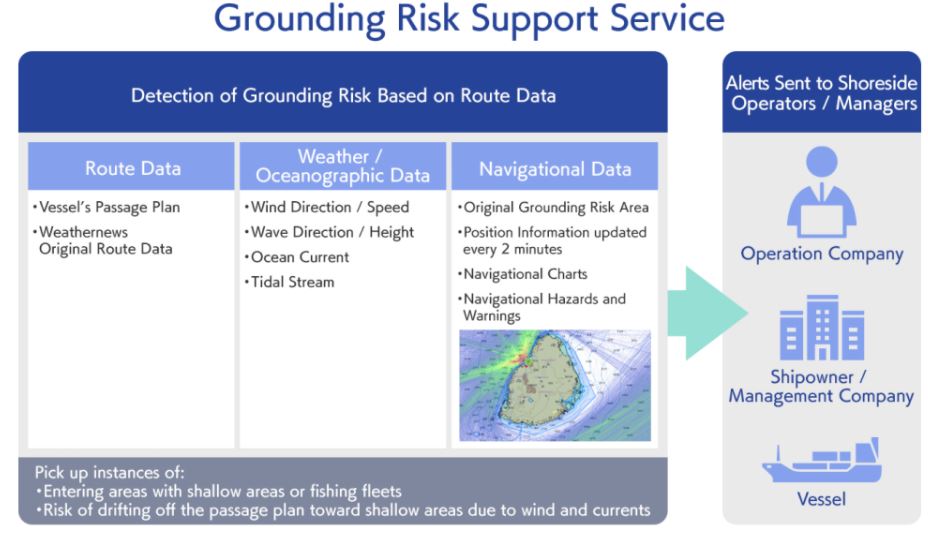 This service monitors the route data before and during the ship’s passage and the position of the ship in real time, and automatically sends out alert notifications to ships, operation companies and ship owners when the ship is either planning to approach an area where there is a high risk of grounding (such as shallow water or an area with fishing fleets), or else when it actually approaches/navigates towards such an area. By combining our original “Route Data” including the ship’s passage plan, high-precision “Weather and Oceanographic Data” such as winds, ocean currents and waves around the world, and “Navigation Data” required for passage and consisting of ship position information updated every 2 minutes, navigational charts, navigational hazards and warnings, and our original grounding risk area database, this system makes it possible to detect drifting from the passage plan and the possibility of grounding accidents occurring in advance. In addition to the ship’s passage plan, the ” Route Data” also uses our original route data which supports 10,000 ships annually.
* Our organization’s original, independently-created data on grounding risk areas in all of the waters of the world. With a water depth of 20m as a guide, we’ve identified areas where ships have not navigated to in the past.

An environmental operation support service which supports environmental measures for the marine transportation industry through digital technology
Recently, the number of instances of extreme weather has increased due to the influence of climate change, and as a result, requests for global environmental conservation, such as the prevention of global warming (as exemplified in the establishment of the Paris Accord and the adoption of the SDGs (Sustainable Development Goals) of the United Nations) have increased, and various initiatives have begun across various industries and countries. The marine transport industry is no exception, and the IMO (International Maritime Organization) has set a goal of reducing CO2 emissions by 50% by 2050 (as compared to 2008). In the past, Weathernews has provided services to support safe and economical operations for the marine transport industry, but in the future, we will release an environmental operation support service that focuses more on environmental measures. This time, we have released the first “Grounding Risk Support Service” that contributes to marine environmental protection by preventing grounding accidents, and we will continue to develop new services that take the reduction of greenhouse gas emissions such as CO2 into consideration.

These services assist shipping companies, ship operators, ship owners, and ship management companies involved in marine transport to simultaneously realize safety, economic efficiency, and environmental performance of their ships, crew members, and cargo. For the theme of DX (digital transformation), they enable support for things such as improvements in business efficiency in remote business systems, information security measures, and the visibility of greenhouse gas emissions levels, by adopting innovative IT technology for both the parties on the ships and those on land.
Source: Weathernews