Worldwide PMI releases for May will be eagerly awaited with the turn of the month in the coming week. The first week of June also brings US labour market report on Friday. Meanwhile the Bank of Canada convenes to update their monetary policy settings. In the data docket, a string of inflation updates will be anticipated from the eurozone, Germany and various Asian economies. GDP figures from Australia and India will also be in focus.

Market sentiment remained lacklustre this week amid indications of slowing growth from flash PMI readings for major developed economies and the May Fed minutes, which provided little fresh impetus for equities. Disappointing high frequency UK PMI data weighed on GBP/USD though sterling did manage to retrace losses into the latter half of the week as the greenback lost grounds. The euro meanwhile regained some strength after the eurozone PMI remained encouragingly resilient. More detailed global PMI data for May will therefore be eagerly watched for broader growth and inflation trends in other parts of the world, perhaps most notably mainland China.

Meanwhile the May labour market report will be the key economic indicators to watch from amongst the upcoming US data releases. Another strong set of readings, including an expected 350k addition to non-farm payrolls, looks set to indicate a tight labour market. Such a positive trend had also been preluded by employment indicators from the May S&P Global Flash US Composite PMI. With that said, what may be of greater interest will be the wages and price picture, given the Fed’s focus on inflation. The final PMI and ISM readings will therefore be assessed for the price indications and indications of supply conditions from key manufacturing hubs around the world.

Amongst central banks, the Bank of Canada is due to announce its monetary policy decision for June, with another rate hike following the March increase is widely expected. Other items to watch includes CPI numbers from the eurozone, Germany, South Korea, Indonesia and Thailand.

Manufacturing PMI surveys: what to watch

Upcoming PMIs due out in the coming week will provide an important steer to demand, supply and prices, and therefore also policymaking. While supply deteriorated in April to hand pricing power to sellers, as indicated by the global suppliers’ delivery times index, the demand side of the inflation equation is more uncertain. Note that the April PMIs showed global manufacturing output falling globally amid a stalling in growth of new orders, the latter being the most up to date indicator of demand available.

The output and new orders indices from the global manufacturing PMIs will therefore need to be watched alongside the suppliers’ delivery times index to get a comprehensive steer on the demand and supply fundamentals for commodity prices. Much will depend on the degree to which China’s lockdowns persist, as these have muddied the global picture.

The degree to which the global expansion can be sustained will also be dependent on the extent to which demand from consumers can continue to recover after the current rebound, which has been fueled by economies reopening after the loosening of pandemic restrictions. The concern is that this rebound could fade quickly, especially if inflationary pressures remain elevated to add to the cost-of-living crisis.

It will also be important to watch the PMI backlogs of work indices, as these will give a guide as to whether current robust hiring will need to be sustained in the months ahead. The PMI future output expectations index will also give clues as to whether firms will remain keen on expanding capacity and additional hiring.

What to watch
Worldwide manufacturing and services PMIs for May

After flash May PMI data showed economic growth coming under pressure in major developed economies amid price pressures, detailed global PMI data for both manufacturing and many country’s service sectors will be released in the coming week. The broader global PMI data are especially keenly awaited after economies such as the UK saw a significant surprise on the downside, with the flash PMI data showing inflationary pressures affecting economic conditions.

Refer to our PMI release calendar for the full schedule of monthly releases.

May’s US labour market report will be released on Friday with Refinitiv consensus pointing to a 350k addition to non-farm payrolls, the unemployment rate to fall to 3.5% and average earnings growth to accelerate to 0.4% month-on-month, altogether reflecting tight labour market conditions and keeping the Fed’s focus on targeting inflation.

Separately, the Bank of Canada is set to update their monetary policy. Following their March increase, another 50-basis point hike is expected according to our forecast for the BoC, which also sees their policy rate climb through the year.

In the eurozone, May inflation and unemployment rates will be updated on Tuesday and Wednesday respectively. The S&P Global Flash Eurozone PMI reflected that price pressures eased from the April peak though remaining sharp by historical standards, while jobs growth surged, led by the region’s rebounding services sector. 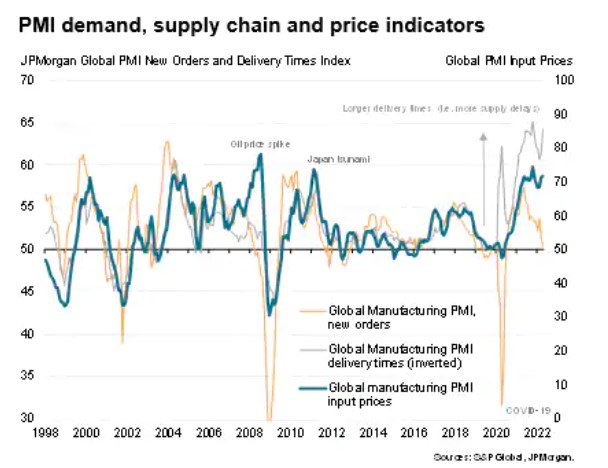 In APAC, a couple of tier-1 data releases will be anticipated in the week ahead including GDP figures across Australia and India while South Korea, Indonesia and Thailand will update May inflation figures. This will be alongside the series of PMI figures that will shed light on May supply and inflation conditions in the wider APAC region, and most notably revealing the latest situation in mainland China among the ongoing effort to control the Omicron wave.
Source: IHS Markit Inc. (https://ihsmarkit.com/research-analysis/week-ahead-economic-preview-week-of-30-may-2022.html)