Our Materials Price Index (MPI) declined another 1.1% last week, its sixth consecutive weekly decline. The sell-off was again broad with seven out of ten subcomponents falling, highlighting the downward momentum in commodity prices over the past four months — the MPI is now 21% lower than its all-time high established back in early March. Commodity prices, as measured by the MPI, are now 6.4% lower than in July of last year. 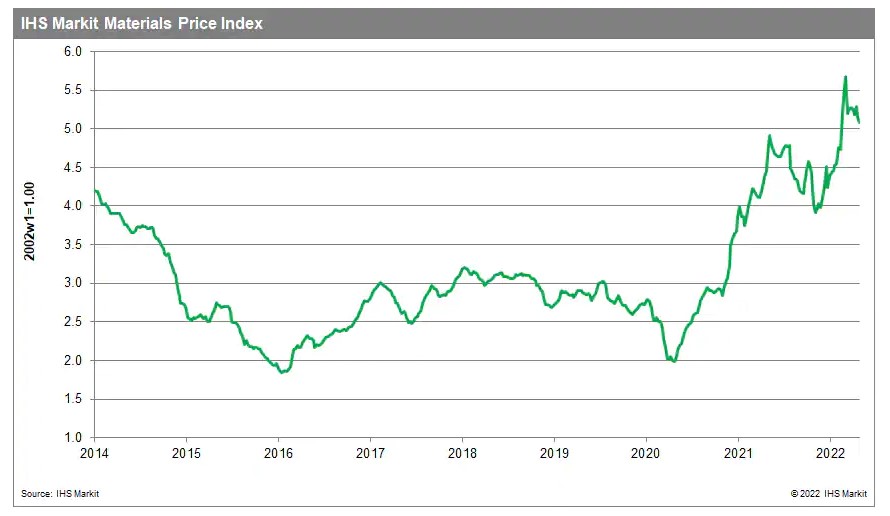 The steel making raw material sub-index dropped a further 2.8% last week and is now down almost 25% since mid-June. Iron ore traded at $104/tonne from $111/tonne the previous week after two more Chinese producers in Guangxi and Liaoning announced they were reducing output due to eroding profit margins and weaker demand prospects. Weaker steel production had a knock-on impact on coal markets with global prices declining 4%. Metallurgical coal is a key input in steelmaking so weaker demand sent Asian prices down to $411/metric ton, from $424/metric ton the week before. North American supply also improved which, measured against weaker expected demand, sent US prices down by $30/metric ton last week. Data from Energy Industry Administration showed US coal production rates increased 10.9% for the week ending June 16. Another interesting development has been the recent decline in DRAM prices. Prices began to soften in the first quarter but have declined strongly since early March and are now 37% lower than they were last summer, a sign that the shortage of semiconductors may finally be coming to an end.

Weaker demand expectations are weighing on commodity prices. The combination of mainland China’s strict zero-COVID policy and tightening monetary policy has markets now pricing in at least a mild recession in global manufacturing. This view received additional support from the July ‘flash’ Purchasing Managers Index in the US, EU, UK and Japan, all of which showed a significant loss of momentum in manufacturing activity. This easing in demand-side pressure does have a silver lining – the disruptions and bottlenecks that have plagued supply chains for the past two years are slowly being resolved. This is evident in the Purchasing Manager Index data for backlogs, delivery times and reported shortages, all of which are showing slow improvement. Together, lower commodity prices and the improving performance on the supply-side of markets suggest cost pressures in goods markets will soon ease. Our caution in the sanguine view of goods price inflation is that spare capacity in energy markets and inventory in metal markets remains low, exposing both to a potential rebound in prices should there be any loss in supply or better than expected demand.