Weekly US coal production jumped to a six-week high of 11 million st in the week ended Oct. 10, up 6.3% from a week earlier but 14.7% lower from the year-ago week, according to the US Energy Information Administration report on Oct. 15.

The latest week was the third highest weekly total in the last seven months and was the 10th time in the last 19 weeks that all four major basins saw weekly increases.

However, the total for week 41 was the lowest total for the corresponding week in over 10 years and was also 27.1% lower than the five-year average.

Despite the lower production, utility stockpiles remained higher on an aggregate basis, totaling an estimated 116.29 million st, as of Oct. 8, up roughly 2.4% from a year earlier, according to S&P Global Platts Analytics.

For the latest week, estimated coal production in Wyoming and Montana, which is primarily made up of production from the Powder River Basin, rose to 5.15 million st, up 5.6% from the prior week but 14% lower than the year-ago week.

In Central Appalachia, estimated weekly coal production climbed to 1.24 million st, up 4.8% from a week earlier but 15.4% lower than the year-ago week.

Year-to-date production in Central Appalachia is down 30% year on year at 49.45 million st, while on an annualized basis, CAPP production would total 63.53 million st, down 26.3% from a year ago.

Coal production in Northern Appalachia rose to 1.55 million st, up 7.2% from the prior week but 19.7% below the year-ago week.

Through the first 41 weeks of the year, US coal production totals an estimated 415.27 million st, down 25.9% year on year, while production on an annualized basis is expected around 533.08 million st, which would be down 24.2% from last year. 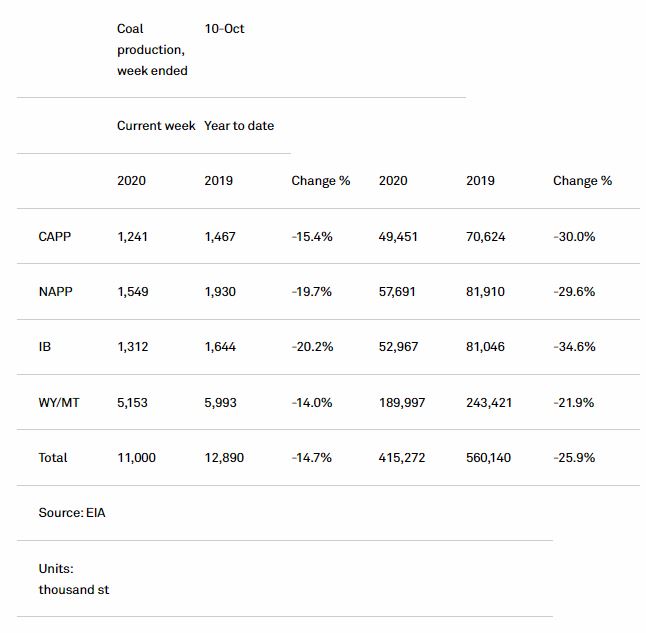 2020-10-17
hellenicshippingnews..
Previous: Drewry: World Container Index Up 108.3% on Year, But Unchanged Over the Previous Week
Next: Gove says UK ‘well prepared’ for no-deal Brexit, even as businesses sound alarm