Weighing In On Oil Tanker Recycling And Deliveries

In the oil tanker market, 2016 and most of 2017 were characterised by deliveries far outpacing scrapping, with an average of 12.5 dwt of oil tanker tonnage delivered in 2016 and 1H 2017 for every one dwt of tonnage demolished. However, this trend began to change in late 2017 after a sharp uptick in the rate of recycling, with Q1 2018 so far having seen more oil tanker tonnage recycled than delivered.

Diminishing Deliveries
After robust contracting amidst a strong tanker market in 2014-15, oil tanker deliveries surged in 2016-17, with 36.1m dwt of oil tankers (10,000+ dwt) delivered last year, the largest volume since 2011. However, deliveries generally slowed over the course of 2017, and whilst deliveries are often lower in the final quarter of the year, the Q4 2017 total was still down by over 30% y-o-y. This slowdown in deliveries has partly reflected the thinning out of the orderbook, with around three quarters of the tonnage ordered in 2014-15 now having been delivered (or cancelled), and with the volume of oil tanker contracting in 2016 falling to a 17-year low of 11.1m dwt. As one would expect, oil tanker deliveries have picked up q‑o‑q in Q1 2018 so far. However, with 6.9m dwt of tonnage delivered up until March 23rd, the total for the quarter is still expected to be around 45% down y-o-y. 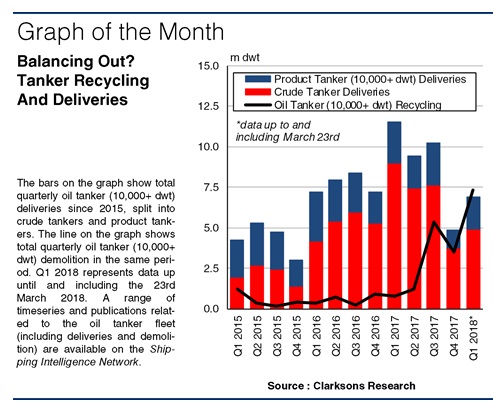 Losing Some Deadweight
Although robust deliveries were the main driver behind firm growth in the oil tanker fleet of around 5% in 2017, limited demolition activity was also a key factor. However, a significant uptick in scrapping began in mid-2017, with 8.8m dwt of oil tanker tonnage scrapped in the second half of the year, representing the highest half-yearly level of demolition since 2003. The elevated demolition levels seen recently can largely be attributed to two factors. Firstly, the tanker market has remained under pressure, with VLCC earnings averaging just $13,544/day in 2H 2017, down 41% compared to the first half of the year. Secondly, scrap prices have risen notably over the past year, with the scrap price for a VLCC in the ISC standing at $435/ldt in February 2018, up from $290/ldt at end 2016.

Tipping The Scales
Against a backdrop of depressed market conditions (with VLCC earnings averaging $6,392/day in Q1 so far), recycling has picked up further into 2018. Up until 23rd March, 7.3m dwt of oil tankers (including 16 VLCCs) had been scrapped, already the highest quarterly level for 17 years. As a result, recycling has outpaced the 6.9m dwt of deliveries, and has led to a 0.6% decline in the crude tanker fleet since the start of 2018.

So, it seems as though the gap between oil tanker scrapping and deliveries is starting to close, and potentially even reverse, although it remains to be seen whether this trend will continue to such an extent in the rest of the year, with the oil tanker fleet currently projected to grow by around 2% in full year 2018. Weighing it all up, with oil tanker deliveries projected to ease by around 20% in 2018 to 28.5m dwt, and potential for scrapping to remain firm in the short-term alongside favourable scrap prices and weak market conditions, it seems likely that 2018 as a whole will see a greater degree of balance in oil tanker fleet dynamics than has been seen in the past few years.
Source: Clarkson

Previous: GHG Reduction: The price of zero-emission fuels would dominate the cost of decarbonization of international shipping
Next: Tanker Demolitions at the Forefront, Although Activity Could Soon Subside