Suezmax rates in West Africa have come under pressure recently, with TD20 last assessed at WS 52.5, about 9% lower than the year-to-date average. Rates made considerable gains towards the WS 70 level at the start of the month in concert with a tightening of the regional position list, which fell to the lowest level since the beginning of the year. In general, Suezmax demand out of West Africa has been quite strong this year with a 31% rise in spot market activity year-on-year, according to our commercial fixture database. We note considerable growth in volumes bound for Asian refiners amid reduced Middle East crude supply. 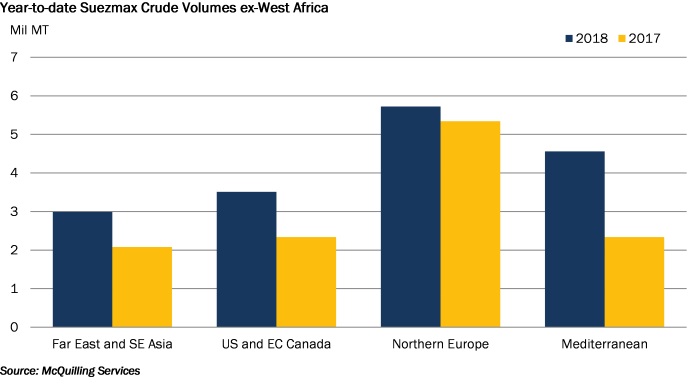 Growth has also been observed to North America amid a significant rise in the pull from EC Canada, which was relatively non-existent over the same period of 2017. Regarding rates in the short-term, we expect pressure through the end of March and spilling into April amid peaking refinery maintenance in Europe; however, demand support will likely rise as maintenance tempers. Rates to the East are likely to see support stemming from a recent narrowing of the Brent/Dubai structure, which, in our view, incentivizes refiners in the East to source these barrels. However, we must note that short-term rates fluctuations are largely going to be driven from the supply side of the situation as vessel supply within the region contracts/expands. In general, rates will remain depressed compared to 2017 levels on the basis of a global oversupply of tonnage with TD20 averaging below WS 70 through June.
Source: Mcquilling

Previous: Energy efficiency in shipping – why it matters!
Next: Shipbrokers See “Flood” of VLCCs Heading to the Scrapyards