What will a post-pandemic economy look like? Here’s what chief economists expect

Soaring stock markets and rising commodity prices give the impression that the fortunes of the global economy are looking up. One by one, institutions revised upward their global growth forecasts for this year, following the announcement of generous recovery spending by the US government in the spring.

Respondents to the World Economic Forum’s most-recent Chief Economists Survey see the growth rate for 2021 about 6%, and most expect a recovery of global GDP to its pre-COVID-19 level by the first half of 2022.

And yet, behind these numbers, some countries are experiencing dramatic new waves of the virus; people are still processing 18 months of ill health, grief and stress; millions of workers have dropped out of the global labor force; job openings are going unfilled across high-income economies; and a number of risk factors could yet delay or derail even the aggregate rebound.

At the same time, new upsides are coming into view for firms and workers who are emerging from the pandemic year with a renewed commitment and leeway to invest into green technologies and green skills. If policy can set the right framework conditions to unlock private green investments at scale, the longer-term growth rate might yet turn out to be much healthier than the currently forecast 1.5% growth for advanced economies in 2025.

In the coming months, leaders will be challenged to carefully navigate the rough waters of transitioning from emergency support to more targeted, transformative spending – and finding the right policy mix that will overcome domestic polarization without further exacerbating global divergences. 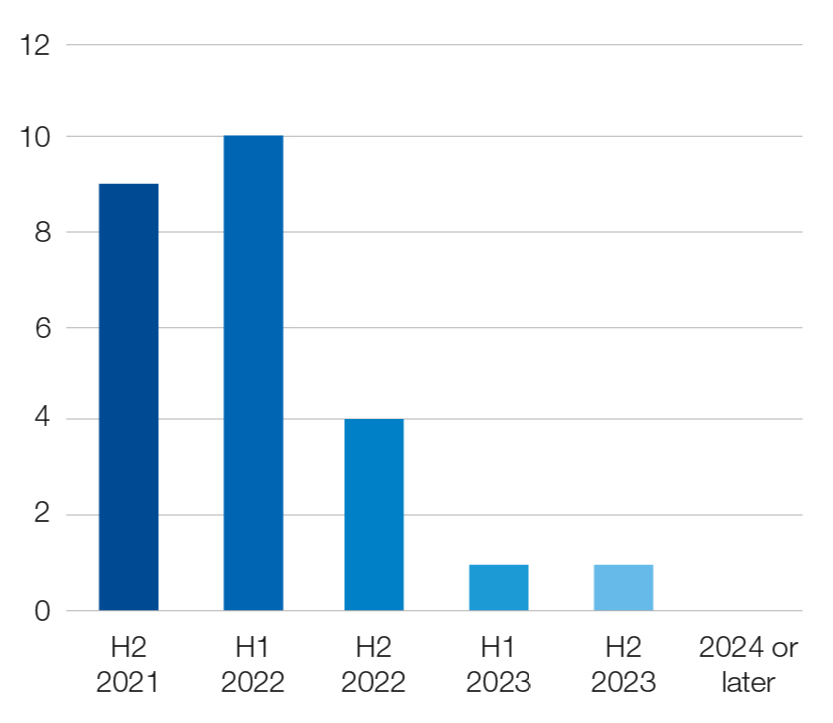 When do you expect global GDP to return to its pre-COVID level? Image: World Economic Forum

In countries where government finances allowed, emergency measures were swift, generous, and fairly comparable across economies. Approaches to fiscal stimulus on the other hand differ widely in scope and reveal a range of priorities in terms of the type of longer-term economic transformation envisaged.

For example, while China’s stimulus spending after the global financial crisis was very focused on advancing the country’s digital transformation, it was more immediately targeted to building out the public health system. The Next Generation EU recovery plan puts its main emphasis on the green transition. The US in turn have passed unprecedented stimulus packages and investment plans for infrastructure and in support of families.

Given the calls from many prominent voices for a deep transformation of market capitalism, governments face the tremendous challenge of putting forward plans that are ambitious enough to truly transform, while not overshooting on spending to an extent that creates waste from bad targeting and hurried implementation.

In economies where governments did not have the resources to provide emergency relief, economic scarring from firm bankruptcies and drops in labor market participation could be a significant obstacle on the road to recovery, and it remains a risk in countries where the transition out of emergency relief into more targeted types of spending is not carefully managed.

Regarding transition risks, survey respondents see the largest risk of scarring from a delayed wave of bankruptcies, followed by labor market scarring. While there was much rhetoric initially about re-shoring of Global Value Chains to increase the resilience of supplier networks, the complexity of existing production networks and current cost advantages seem to be keeping the existing system in place.

There is a high probability of economic scarring due to: Image: World Economic Forum

Finding the right mix of fiscal and monetary policy

The contours of the future division of labor between fiscal and monetary policy in facilitating both stimulus spending and longer-term investment plans have been becoming clearer in recent weeks. Survey respondents expect monetary authorities to hold steady on prioritizing price stability, implying an increase in rates in the not too distant future as inflation is starting to pick up. A new direction is expected on the fiscal side, where a global minimum corporate tax rate has become more likely since the US’s proposal in April. The different abilities of governments to intervene has increased existing gaps between countries that were able to afford fiscal rescue measures and vaccines and those that were not. How governments now manage the transition to accelerate structural change that brings more inclusive outcomes within countries will be as critical as the action of the international community to bridge gaps across countries.

The tougher the pressures domestically, the more temptation there will be for internal political forces to ramp up protectionist measures. While multilateralism is currently seeing a revival, political forces are building in many countries that may put this reopening into question. Even in the current circumstances of a relative détente, tensions between large powers remain and are generally expected to increase over the medium run.

While the high level of interconnectedness today may counteract political efforts to further escalate such tensions, the rhetoric of self-reliance is getting louder, and interdependence with other countries is portrayed as a vulnerability by some politicians rather than a source of mutual gain. The COVID-19 crisis made clear that trading relationships between countries cannot be taken for granted, as health measures and national interest took priority.

Another danger that could also derail the recovery and future growth are large-scale cyberattacks, including those performed by state actors. Indeed, survey respondents see the largest tensions or conflict potential internationally arising from cyberattacks, followed by technology and trade tensions.

Focus on a green recovery

As more recovery measures are starting to be implemented, the coming months will be critical for putting the climate transition on the right track, and global cooperation for this will be key. Business leaders have high expectations of policymakers to provide timely guidance, public investments and reliable framework conditions, as one of the biggest bottlenecks for private investment in the green transition currently is policy uncertainty.

Progress on this front will be critical to rein in the slowest burning but by far most destructive of the risks to the current recovery trajectory. A significant number of survey respondents believe that 2050 is not ambitious enough for net-zero targets and are instead looking for such targets to be advanced – some even suggest to before 2035. While national governments have hesitated to adopt a carbon tax, there is further a consensus among survey respondents that this is among the most effective policy instruments to reach targets for carbon neutrality. The global economy is at a critical juncture of growing divides among and within countries. Much care will be needed to ensure efforts to reduce divergences in one place will not exacerbate the situation elsewhere. Taking a global approach to the green transition and supporting investments in green technology and skills that includes lower productivity firms and disadvantaged workers will be one way to counter the forces that are driving today’s K-shaped recovery.
Source: World Economic Forum

Should shipowners be responsible for compliance with shipping ETS?