Their work was conducted as part of the Wilton E. Scott Institute for Energy Innovation.

“We are the first to construct estimates of air pollution and greenhouse gas costs for movements of crude oil by rail and pipelines,” said Clay.

To construct the estimates, the researchers used data on locomotive diesel consumption, pipeline pumping station electricity consumption, locomotive and power plant emission factors and the AP2 integrated assessment model, which maps county level emissions to costs for counties affected by the emissions. Their estimations were also based on The Pipeline and Hazardous Materials Safety Administration’s 2015 study.

The paper is also the first ever to compare the costs of air pollution, greenhouse gas emissions, and spills and accidents across rail and pipelines.

Using data of crude oil transported out of North Dakota in 2014, Muller says the team found “that air pollution and greenhouse gas costs of shipping crude oil by rail are much larger than spill and accident costs.”

In Figure 1 below, the authors note that air pollution and greenhouse gas costs equal $1,000 per 1 million barrel-miles via rail transportation compared to just under $400 in damages from spills and accidents. Via pipelines, it costs $500 in pollution and emissions costs per 1 million barrel miles while it costs about $50 for spills and accidents. 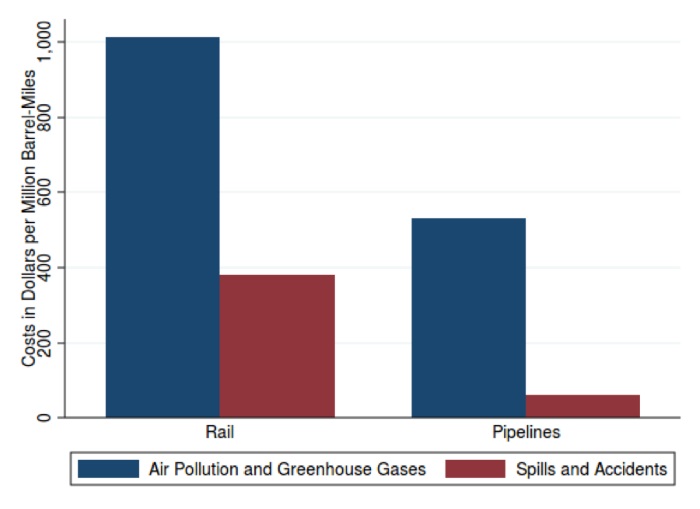 According to Clay, their estimates indicate the costs are more than twice as large for rail and more than eight times as large for pipelines.
For policymakers, these findings are key to helping address the external costs that firms impose in a variety of ways, including taxes and/or policies that would make pipelines easier to build. The team’s results suggest that further research on the air pollution and greenhouse gas emissions costs of transporting crude oil and other petroleum products is necessary.
Source: Carnegie Mellon University

Ship shape for the future?