When will supply chain frictions and input shortages abate?

The root of the input shortages and supply chain problems lies in the first wave of the coronavirus crisis. The imposition of global lockdowns in the first quarter of 2020 was expected to cause a recession worse than that seen in 2008. The economy took years to recover from the global financial crisis and it forced businesses to reduce production capacity. However, history did not repeat and instead, the opposite happened. Massive fiscal stimulus stabilised incomes and spending preferences shifted from services, like hospitality and tourism, to durable goods. This quickly put pressure on the global supply chain, which was also accentuated by weather disruptions like those seen in Texas and Taiwan and of course, the Suez Canal blockage. Supply chain frictions were first visible in sea transport and semiconductor shortages but quickly spread to commodities and now also to labour and energy.

At this point, industry is dealing with widespread supply chain frictions and shortages on a global scale. This, in turn, is causing frontloading by worried businesses, which is exacerbating the problem across supply chains and resulting in large increases in backlogs, production hiccups and even shutdowns, as well as large price pressures. The most significant problems still stem from 1) transportation problems and 2) semiconductors, with the container crisis causing larger disruptions in the US, while semiconductor shortages are having a bigger impact in Europe.

1Transportation problems
Current data tracking international manufacturers’ trade by sea shows some improvement in the container throughput in September, but hides large regional differences. While container throughput dropped significantly in Chinese ports, it rose strongly in European countries like France, Belgium, the Netherlands and Germany. Overall, however, the index remains highly volatile with ongoing logistical disturbances continuing to dampen trade. In addition, schedule reliability, a measure of the actual on-time performance of individual vessel arrivals in ports around the world calculated by Sea-Intelligence, remains at an extremely low level. Throughout the year, schedule reliability hovered between 30% and 40%, leading to 12.5% of the global deployed liner capacity being unavailable in August due to disrupted sailing schedules, delays at ports, and empty container ships waiting longer to be loaded at congested terminals. In normal times, schedule reliability stands at around 70% to 80%.

2Semiconductors
Next to sea transport problems, the semiconductor problem is key because of the large dependency in certain sectors. The most significant declines in production have been seen in the auto sector, which is also reflected by the amount of businesses reporting input shortages as a factor hindering production. It is now closely followed by other sectors also dependent on computer chips. The problem is even more widespread than that though, with most manufacturing sectors now showing all-time highs in reported labour and equipment shortages hindering production. 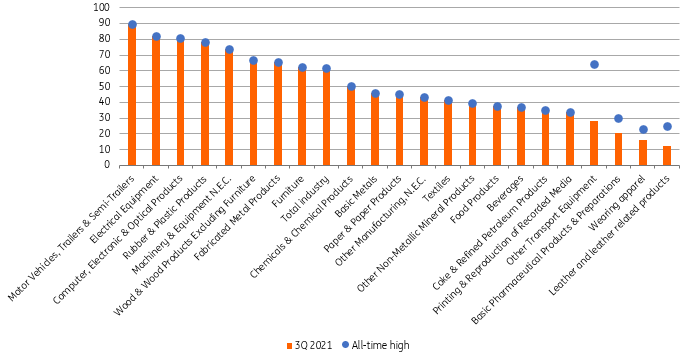 Why we do not expect any relief until well into 2022
The question for the broader economy is whether inflationary pressures will persist longer than expected, and how much growth will be affected. To answer these questions, it is important to get an idea of how long the disruption will last.

Although most economic indicators have come off their historically high levels over the last couple of weeks, global demand for goods remains strong and is adding to already enormous backlogs for industry. What’s more, with some of the busiest shopping days of the year coming up (Black Friday, Cyber Monday and Single’s Day in November, followed by the Christmas season and Chinese New Year in February), the pressure will remain on. Furthermore, shortages are causing hoarding behaviour among businesses and consumers, leading to excess demand and further supply chain pressures.

Factors arguing in favour of easing in the short-term are still limited. Extending operating times up to 24/7 to ease cargo congestion, as done in the US, helps to a certain extent, but with problems along supply lines, such as missing truck drivers, won’t untie the many knots hampering smooth world trade. Although we might have hit a peak of upward momentum in trade as indicated by the latest WTO goods barometer – with the forward-looking new export orders index slowing from 114.8 to 109.3 – the gradual normalisation of international transportation will take months not days, explaining why supply frictions will last well into 2022.

With demand remaining high from the numerous festivities, culminating in the Chinese New Year (February 1 to February 7, 2022), and bottlenecks unlikely to be solved on short notice, we expect some relief to set in from early February. During the Chinese New Year, all factories will shut down eventually so goods supply coming from China will be limited, meaning that orders around the world can be processed without even more supply coming from China. Shipping logistics can at least partially catch up with supply during this period.

In terms of specific shortages, semiconductor shortages are set to remain problematic for quite some time. Setting up new production facilities takes years, while demand continues to be high. This leads us to believe that very tight semiconductor markets will remain in place until 2023. Shortages of chemicals needed for plastics or paint, for example, are also expected to last well into 2022, with many petrochemical plants in the Gulf Region still shuttered for the moment and shipping problems exacerbating current issues. Besides that, a lot of the input shortages are currently exacerbated by the shipping problems, which means that those pressures will persist until shipping issues abate in mid-2022.

Beware of the turning point: Will we suddenly face overcapacity?
What if the current situation reverses and we are faced with overcapacity, either because of a drop in economic activity or because of an oversupply in ships? To react to recent capacity bottlenecks, carrier ship orders surged strongly. However, lead times to build new vessels are long, meaning that the ships now being manufactured will only become available to a large extent in 2023. Therefore, it’s unlikely to be a pressing issue before this date. In addition, with demand expected to remain robust overall, the container flow will remain solid and bottlenecks are set to continue for some time. Even if there were a sudden drop of economic activity, clearing existing orders will take months as it will take time for things to return to normal all along the supply chain. However, from 2023 the risk of excess capacity drops as catch-up goods demand retreats, fleets are expanded and investment into production capacity for products now facing shortages results in increased capacity.

Given the current investment in capacity and likely moderation in demand over time, it is likely that this will result in more weakening inflationary or even deflationary pressures emerging from the supply chain over the course of 2023 though.

Pipeline pressures for goods inflation in the eurozone are very elevated 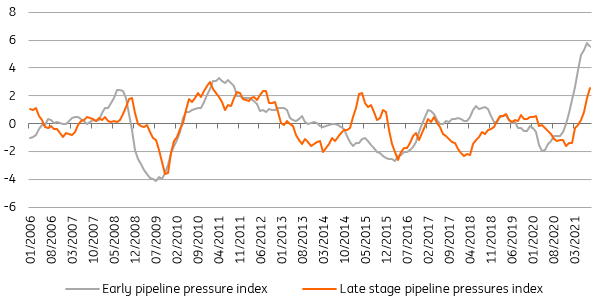 Downside risks for growth in 1H 2022
From a growth perspective, continued disruption for most of 2022 remains a key downside risk to the outlook. Bottlenecks and production shutdowns are set to weigh on GDP growth in most markets, but some more than others. Goods demand is key though, as this has not yet abated despite lead times for orders increasing dramatically in some markets. With new orders still high, expectations are that a continued recovery in GDP is more likely than stagnation. In Germany, for example, we expect growth to improve in 2022 compared to 2021. The main downside risk is around more drastic production cuts when shortages morph into real bottlenecks. That could lead to more significant output shocks and put the growth recovery at risk. With services still recovering at a fast pace though, there is a solid base under the global growth recovery at the moment, making the supply chain problems more of a fly in the ointment for the outlook right now.
Source: ING