Home / Oil & Energy / Oil & Companies News / Who will make money on the second wave of US LNG?

Who will make money on the second wave of US LNG?

US LNG projects have made significant commercial progress in the last year. There is no longer any question about whether there will be a second wave – it is a reality. Some 30 mmtpa of US LNG has taken FID in 2019, as part of what will be a record year for LNG FIDs globally.

Developing this new wave will be different from the first. Getting to FID will require a deeper focus on gas sourcing within a transitioning US market, where the opportunity to optimise idle regas facilities and repurpose brownfield pipelines is quickly disappearing.

As market participants position themselves to catch the second wave, commercial structures are changing. 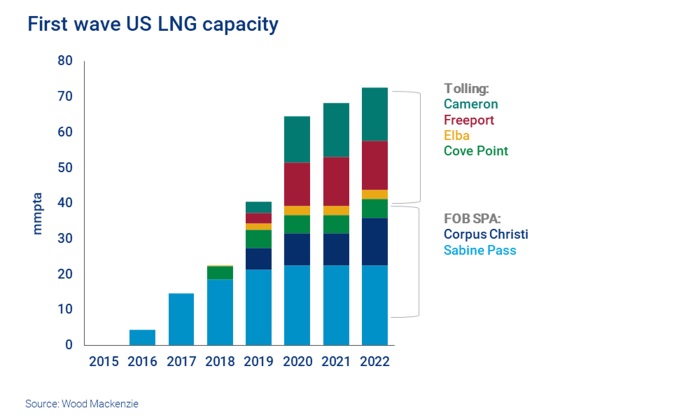 In the case of FOB SPA, the model Cheniere has offered for long-term sales, the project sources the gas and the buyer purchases LNG on a Henry Hub-based contract.

With tolling, the project sells the liquefaction service and the LNG buyer is responsible for going into the US grid to bring gas to the plant. This structure means more work for the buyer but does enable them to capture portfolio optimisation on the US side.

How does the second wave differ?
The first wave leveraged existing underutilised infrastructure in the US. Project facilities such as tanks, berths and header pipes were already in place to support imports. Pipeline capacity could be repurposed with low cost expansions.

The second wave doesn’t have this ‘first mover advantage’. Sourcing gas in the US is getting more complicated. Grid capacity is largely subscribed by the first wave and accessing more supply requires longer pipelines. Either the project or tollers will have to secure additional capacity to reach the market, likely though new – potentially costly – pipeline projects.

However, US LNG is still attractive. The global fundamentals support pricing spreads between the US, Europe and Asia. Demand for new supply projects is increasing, and we believe the impact of the second wave will see the US become the world’s largest LNG exporter by 2024.

Second wave structures
Second wave projects have evolved with the market, offering new commercial structures that change the balance of risk and reward for project developers, suppliers and offtakers. In today’s oversupplied market, project developers are competing for buyers, which means potentially taking on more or different risks than they have in the past.

Some developers are competing on cost. Venture Global, in particular, has taken a completely different approach to engineering, procurement and construction (EPC) contracting compared to other US projects. The Calcasieu Pass project does not have a fully-wrapped lump sum turnkey EPC contract, which means Venture Global is taking more execution risk, but has been able to lower its cost.

Others are differentiating with new offerings, like upstream integration or alternative pricing schemes. Tellurian has integrated upstream and pipeline offerings. NextDecade has offered FOB volumes on oil indexation. Cheniere’s gas purchase from Apache on global prices enables it to sell LNG on global prices, without taking the arbitrage risk between global markets.

These offerings have transformed over the last few years due to fierce competition between projects. In the US, in the period from 2016 to end of 2018, only 7 mmtpa took FID since the nearly 50 mmtpa rush in 2014 and 2015. Remaining projects have fought to survive.

As the market transitions, everyone from project developers to buyers, traders and suppliers will be positioned differently amid the evolving commercial structures.
Source: Wood Mackenzie