In a stellar year for base metals, aluminum has led the pack. Now, producers say surging raw material costs could drive prices even higher.

Alumina, the raw material used to make aluminum, has jumped 56 percent since August after China shut down some production, triggering a wave of buying by traders and aluminum smelters. The rally is putting a strain on metal producers in China, where alumina accounts for 40 percent of the cost of making aluminum.

Cost pressures could worsen in the months to come as Chinese environmental reforms weigh most heavily on bauxite and alumina producers. That may give extra fuel for aluminum’s 28 percent rally this year, the biggest since 2009.

“The rise in raw material prices is lifting the global cost curve for aluminum production and that should support higher prices,” Svein Richard Brandtzaeg, chief executive officer of Norsk Hydro ASA, said in an interview in London. Prices for other key aluminum inputs including caustic soda, carbon anodes and pet coke have also jumped, he said.

The rally in aluminum and other metals shows how China’s changing policy goals can upend commodity markets with far-reaching effects. The economy has shifted to a period where high quality is sought, moving away from its fast-growth era, President Xi Jinping said during the National Congress in October. 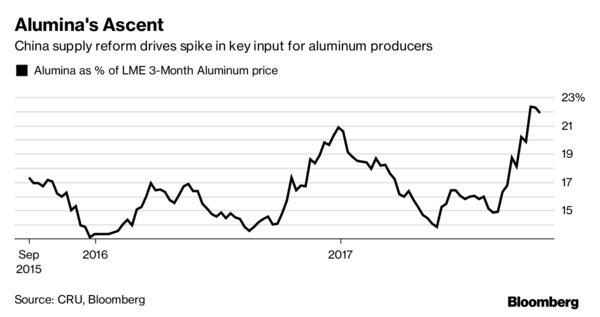 While China’s shutdowns of aluminum smelting were likely to be seasonal, alumina production could be permanently affected, according to Mark Hansen, chief executive at mid-sized metals trader Concord Resources Ltd.

“The upstream supply has been really squeezed. While most smelters aren’t going to permanently close,” Hansen said, meaning that smelters are “stocking up on alumina for when they restart production.”

Alumina was $479 a ton on Oct. 26, up from $306 at the start of August, according to CRU Group. Brandtzaeg said Norsk Hydro recently sold cargoes at close to $500, and he sees high prices persisting as China supply curbs bite.

Alumina is now trading at about 22 percent of the aluminum price, a record high and an “extreme” reading, according to UBS Group AG analysts. They said the ratio isn’t sustainable unless aluminum prices increase or alumina retreats. 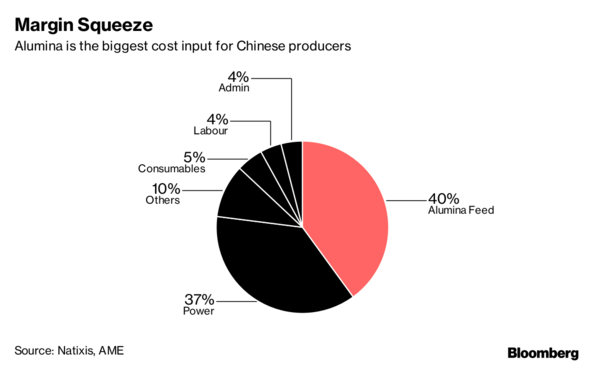 Alumina Ltd., an Australian miner with operations throughout China, has said that environmental inspections limited bauxite mining in Henan and Shanxi provinces since August. Chinese production cuts over the winter would reduce aluminum production by 1 million tons and alumina by 2.5 million tons.

Roughly two tons of alumina are needed to produce one ton of aluminum, which would that would create a “net alumina shortage” of 0.6 million tonnes, the Australian miner said in a presentation in September.

Chinese smelters likely had low alumina stockpiles and had been caught off-guard by the scale of supply cutbacks in bauxite and alumina since late August, traders said. That’s led to a rush to buy alumina on the international market.

Traders in China’s local market are now buying up spot inventories, betting that the rally will run further, Brandtzaeg said.

Higher raw-material costs are starting to erode profits at producers, such as Norsk Hydro. The company reported weaker-than-expected earnings for the third quarter on higher costs for bauxite and alumina. Still, the company is in a better position than others because it can produce more alumina than its smelters need, rather than buying it on the spot market.

The main winners are companies that are big producers of both alumina and aluminum. State-owned Aluminum Corp. Of China Ltd, reported net income that jumped almost 11-fold in the third quarter. The company, known as Chalco, produces four times more alumina than it does aluminum, according to its 2016 annual report.
Source: Bloomberg