A few weeks ago, we wrote about how the divergence in inflation between countries in the eurozone is not a problem for the ECB. Since then, differences have become even more apparent now that we have seen another spike in inflation. In fact, March headline inflation ranged from 4.6% in Malta up to 15.6% in Lithuania. Measured in standard deviation, inflation divergence in the eurozone has never been higher than it is now.

In the past, inflation divergence was an additional problem for the ECB as it complicated its ‘one-size-fits-all’ policy. In fact, this problem occurred mainly in the first years of the monetary union when monetary policy was too loose for high inflation and catching-up economies, such as Spain and Ireland, eventually leading to asset bubbles. Since the financial crisis, monetary policy was often too loose for a country like Germany but partly still too tight for countries going through structural adjustments. Now, we have to consider whether much higher inflation divergence than in the past could once again complicate the ECB’s life.

Divergence in inflation between countries has only increased 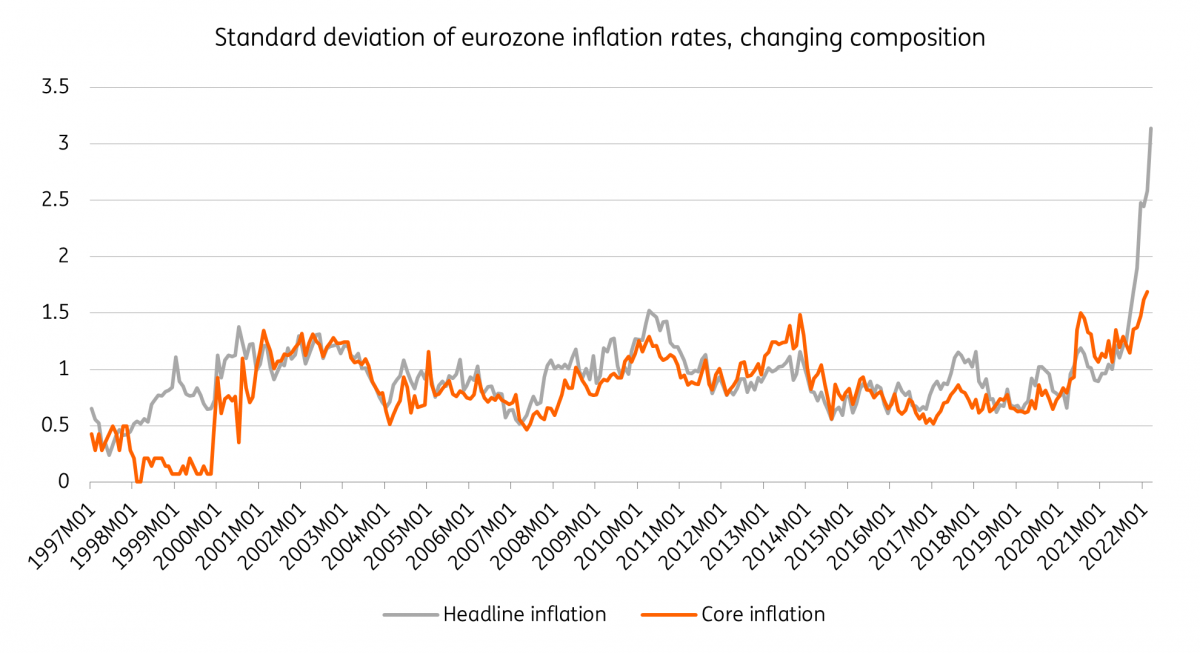 Energy inflation still dominant in driving inflation differences
The recent jump in inflation has been predominantly seen in energy prices, coming on the back of the price shock seen in early March when the war in Ukraine started. Concerns about energy availability, especially for oil and gas, have resulted in another spike. Mind you, core inflation has also been rising due to supply chain problems, reopening effects and second-round consequences from the energy crisis, but to a much smaller degree. That makes energy the main driver of the divergence between countries at the moment.

The differences in energy inflation are mainly determined by the energy mix of countries – more fossil use makes consumer prices increase more quickly, the speed with which market price changes are translated into consumer prices and government interventions. While divergence of headline inflation surged like a rocket, divergence of core inflation remained relatively well behaved, though it is still slightly above previous peaks. 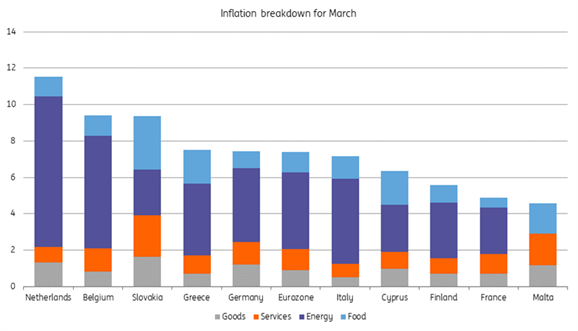 Inflation expectations remain moderately similar between countries
As energy prices are the main driver behind current inflation divergence, the ECB will not really be too concerned. In fact, the divergence of core inflation is much smaller, although it has now also surpassed the corona crisis peak. In any case, what matters most for the ECB and its future monetary policy path are inflation expectations and wage developments.

Consumer inflation expectations are high across the eurozone 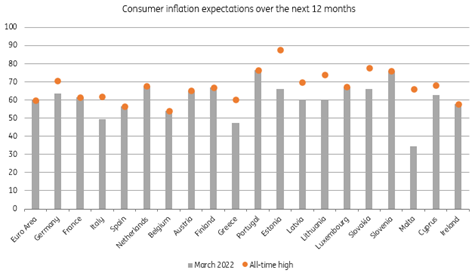 Longer-term inflation forecasts for eurozone countries have been converging 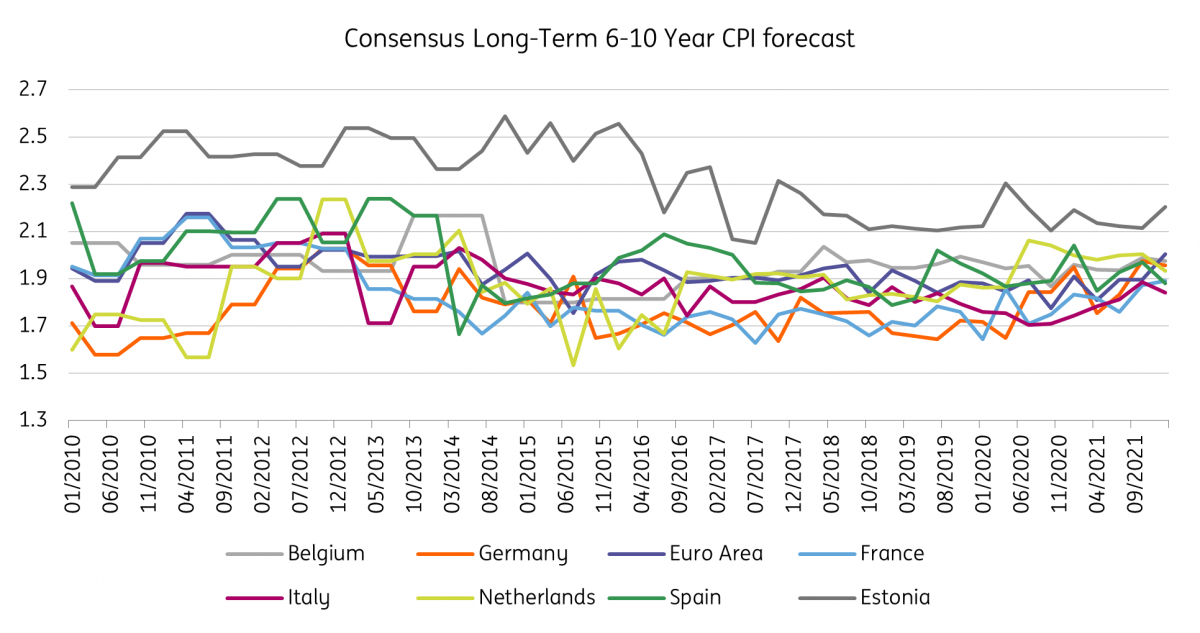 In terms of divergence, bond yields remain the ECBs Achilles’ heel
The ECB’s job has become increasingly tough in recent months, where an error on both the hawkish and dovish sides could prove costly for the economy. While divergence in inflation rates between countries only seems to add to this problem, we’re actually seeing that key medium-term indicators for monetary policy continue to converge. That helps in making policy somewhat easier to set for the ECB and focuses the discussion on how monetary policy in the eurozone should react to looming stagflation, potentially distinguishing between normalisation and tightening (see also our ECB Preview for Thursday’s meeting here).

There is, however, another more crucial weakness in terms of country differences that is complicating the ECB’s life: bond yields. In the current environment of rapidly rising longer-term rates, the ECB will closely watch how quickly yields are rising and whether this remains sustainable for the more vulnerable eurozone economies. This is starting to become more of an issue as last week saw peripheral yields soar to the highest levels since the announcement of the EU recovery fund. Continued rapid increases in interest rates would result in a choked off recovery and could cause further financial stress. Don’t forget that the ECB has always warned against so-called unwarranted tightening of financing conditions.

The recent increase in bond yields and the widening of spreads could worsen the ECB’s stagflation problem as higher yields and worsening financing conditions have a relatively stronger impact on growth than inflation. Therefore, we were not at all surprised by recent market rumours that the ECB is working on a new programme to tackle the unwarranted widening of bond yield spreads. With such a programme, the devil is definitely in the detail as it would require assumptions on ‘neutral’ or fundamentally justified bond yield spreads across countries and would also potentially create new legal headaches. Still, we have always expected the ECB to eventually come up with an anti-fragmentation asset purchase programme to accompany its path of policy normalisation. In any case, inflation divergence in the eurozone is currently one of the most negligible problems the ECB is facing.
Source: ING

Iranian tanker reloading oil in Greece that was confiscated by U.S. – sources

Yang Ming Publishes Financial Report for 1st Half of 2022