Will China continue to bank on coal?

The 2020s have already proven to be replete with unprecedented challenges – and we’re only a few months in. The coronavirus pandemic is underscoring the extent to which the world is unprepared for global-scale disasters. And yet the climate crisis looms as another international challenge of extraordinary magnitude, requiring ambitious action from the private and public sectors alike. With the US government’s abdication of global leadership on climate, the world will continue to look to China. How its institutions treat coal in particular bears much weight on the future of the industry and our shared climate.

The giants of global finance are ditching coal

Many global financial actors have started to take the climate crisis more seriously – if only to protect their own bottom lines. One after another, financial institutions around the world have been publishing new commitments to limit their support for fossil fuels. For instance, BlackRock, the world’s largest asset manager, announced it would divest its actively managed funds of most thermal coal companies, and AXA and 18 other global insurance companies have committed to or have already been restricting insurance coverage for and investment in coal.

Dominoes are starting to fall in the commercial banking sector as well. Royal Bank of Scotland committed to fully phase out its coal financing by 2030 and at least halve the climate impact of its financing activity by the same year. In the US, the biggest banks’ steps have been much meeker, but still noteworthy: in recent months both JPMorgan Chase, Goldman Sachs, Citi and Morgan Stanley have strengthened their coal policies – while also introducing restrictions on some Arctic drilling projects. In April, Japanese banking giants SMFG and Mizuho tightened their coal funding policies.

As a source of enormous amounts of carbon emissions and air pollution, coal is losing its financial appeal as renewable energies become ever cheaper. “Up to 80% of coal assets will be stranded…” said former Bank of England governor Mark Carney in December. “A question for every company, every financial institution, every asset manager, pension fund or insurer: what’s your plan?”

While most of these policies leave much to be desired in order to align business activity with climate stability, the message to the fossil fuel industry is becoming clearer: the financial sector is increasingly wary of the reputational and financial risk associated with supporting fossil fuels in the age of climate catastrophe. The recent Banking on Climate Change 2020 report by a group of non-governmental organisations found that 26 of 35 major global banks analysed now have policies restricting coal finance. More than a dozen also restrict finance to some oil and gas sectors. 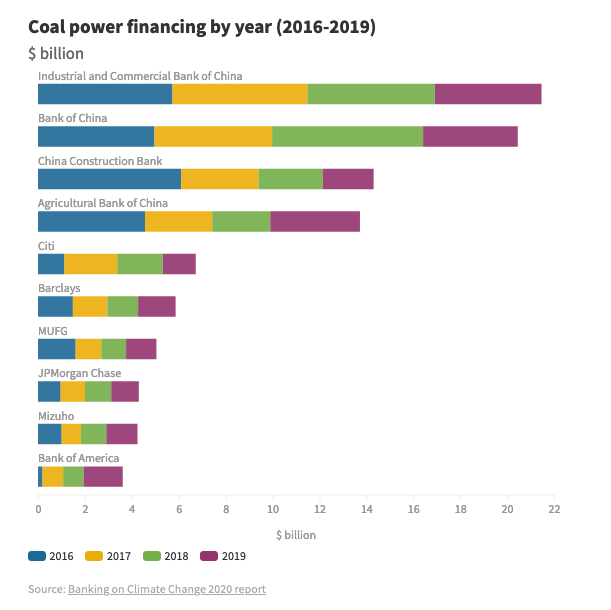 In contrast, the four major Chinese banks included in the study – Bank of China (BOC), Industrial and Commercial Bank of China (ICBC), Agricultural Bank of China (ABC) and China Construction Bank (CCB) – have few to no policy provisions regarding their involvement with fossil fuels. BOC and CCB each have a vague commitment to conduct due diligence around environmental and social concerns. ICBC was the first Chinese bank to join the Task Force on Climate-related Financial Disclosures (TCFD) and a founding signatory to the Principles for Responsible Banking. Though these initiatives call for businesses to align with the Paris Agreement and the UN’s Sustainable Development Goals, ICBC has not used these platforms as inspiration to draw red lines about what it won’t finance. Nor have the other three banks taken such measures.

At the same time, Banking on Climate Change 2020 shows that these four banks have together financed fossil fuels with nearly US$240 billion in the four years since the Paris Agreement was adopted. Though many of their global peers have surpassed them in overall fossil financing, the Chinese banks included in this study top the chart in the coal mining and power sub-categories. BOC, ICBC, ABC and CCB together make up 51% of financing to 30 top coal power companies globally from 2016-2019, and 67% of financing to top coal mining companies. This result might not be so surprising, given that China houses over half of the world’s coal power plant fleet and is a major coal producer.

The data tracks lending, as well as debt and equity underwriting, from these banks to support fossil fuel businesses and projects in China and globally. In addition, according to data from the Global Coal Finance Tracker – which monitors government-affiliated financial institutions’ direct support of overseas coal power projects – ICBC, BOC and CCB are the top lenders, along with China’s two policy banks: China Development Bank and Export-Import Bank of China. Most of this funding is going to Belt and Road countries.

These banks all seem to have so far favoured coal and other fossil fuel investment in the Belt and Road countries. According to a joint report by researchers at Boston University and the World Resources Institute in 2019, close to 75% of the syndicated loans made by the two policy and four commercial banks to support overseas energy and transportation projects went to the oil, gas and petrochemical industries. Out of power generation and transmission projects, about 40% went to coal power plants and 14% to oil and gas. Non-hydro renewable energy made up about 12% and hydro 23%. This is despite a huge gap in financing needs for renewable energy from BRI countries as indicated in their commitments under the Paris Agreement. All four commercial banks are signatories to the Green Investment Principles for the Belt and Road Initiative launched during the second Belt and Road Forum hosted by president Xi Jinping in 2019, when he reiterated China’s commitment to promoting a green Belt and Road.

Researchers have pointed out the increasingly diminishing returns from investments in coal-fired power plants in China. China’s banks have been called on to help stimulate the Chinese economy as the country recovers from the Covid-19 pandemic. They, along with other government policies, have a huge role to play in effectively directing resources to support quality, clean, advanced and profitable infrastructure in China and beyond. Moving away from coal will not only increase the world’s chance of achieving the Paris Agreement targets, but will also decrease financial system stress.

The global pandemic is also exposing deep vulnerabilities of poorer and over-indebted countries, including many along the Belt and Road initiative. Pakistan has asked China to relax debt obligations associated with 12GW of thermal coal power plants under the China-Pakistan Economic Corridor. Facing the prospect of a global recession, investment in coal power infrastructure will become even riskier for borrowing countries and lenders. Renewable energy investments can be a major force in economic recovery, generating decent return on investment while boosting employment opportunities, according to the latest estimate from IRENA. The world will need the global banking sector to champion a recovery effort that strengthens societies’ capacity to endure future shocks.

Coal is increasingly risky in both China and BRI countries and incompatible with global efforts to tackle climate change. It is in the interest of Chinese banks and China’s financial sustainability to follow through with – and strengthen – their green commitments.
Source: China Dialogue