With more than 355 million tons handled last year, the export of Brazilian iron ore has been consolidating as an important market for harbour towage. Wilson Sons, the country’s largest integrated port and maritime logistics operator, carried out more than 7,000 manoeuvres related to the segment in 2021 and sees in the iron ore market an opportunity to expand the Towage business unit.

Today, Wilson Sons operates in the ports of Ponta da Madeira (Maranhão), Açu (Rio de Janeiro), Itaguaí (Rio de Janeiro) and Tubarão (Espírito Santo), the main ports for the export of the commodity. The main destination is China, which imports more than 70% of the total Brazilian iron ore, and other Asian countries, such as Japan and Korea.

The sector should continue to grow in the short and medium term. The estimate is that, from the second quarter of 2022, the resumption of the Chinese economy will boost demand for Brazilian iron ore, in addition to the completion, in the coming years, of projects such as the construction of new terminals for the export of this cargo, mainly in the Northeast. “With the higher demand for the product, the number of vessel calls will also increase,” says Elísio Dourado, commercial director of the Towage division. 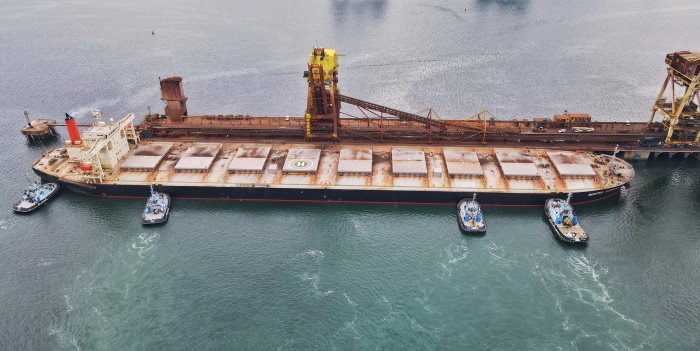 According to him, Wilson Sons has been studying market trends in order to make its tug fleet ready in the short, medium, and long term. “We are carrying out a plan that seeks to meet the volume of cargo and ships in the coming years, reconciling our fleet and the construction of new tugboats with information on projects, cargo volume and even possible increases in the size of ships in some terminals,” he says.

Safety and sustainability
The concern to make the iron ore production chain more efficient and sustainable has also required the towage operators to adapt. Ships that transport bulk cargoes, such as iron ore, are large and have specific operational needs – requiring, on average, four high powered tugs for berthing and unberthing.

With a fleet of 80 tugboats, the largest in the country, Wilson Sons is investing in more sustainable and high-powered assets, in addition to offering customised solutions for each customer. During this year, the company will receive new IMO Tier III tugboats which are capable of reducing nitrogen oxide (NOx) emission levels by more than 75%.

In addition, the Towage unit has its own Operations Centre (COR). Located in Santos (SP), the COR works 24/7, monitoring all business operations in real time through the AIS (Automatic Identification System) antenna network. “COR has made our navigation safer and is fundamental in the construction of operational strategies, in addition to avoiding unnecessary displacements, reducing the emission of pollutants,” says Elísio.

The Towage business unit also has in its structure the Maritime Training Centre (CAMWS) where periodic training of crews and specific projects of customers and other interested parties are carried out. CAMWS has its own manoeuvre simulator, capable of simulating different operational scenarios.

“These differentials are crucial in guaranteeing the efficiency of complex operations. No wonder Wilson Sons’ Towage business unit is a reference in harbour towage, in addition to having world-class status in safety, based on standards defined by Du Pont, a reference in consultancy in the sector,” concludes the director.
Source: Wilson Sons