The most powerful tug operating in Brazil, with 91 tons of bollard pull, “WS Centaurus” is powered by greenhouse gas reduction technology

This month, Wilson Sons’ new tugboat “WS Centaurus”, which started operating in June, is to join the company’s fleet in São Luís to support berthing and unberthing of iron ore ships at the Ponta da Madeira Terminal and at the Port of Itaqui and Alumar. With 91 tons of bollard pull, it is the most powerful tugboat operating in Brazil.

“WS Centaurus will operate in São Luis do Maranhão, helping to increase the efficiency of Wilson Sons’ fleet of 11 tugboats already operating in the area. The tug will manoeuvre the large iron ore ships berthing at the Ponta da Madeira terminal, as these vessels require powerful tugs. Its operation will also be important in the Port of Itaqui, which has been growing in terms of agribusiness activities, with cargos of grains, fertilisers and liquids, such as oil and derivatives,” explains Márcio Castro, executive director of the Tugboat division at Wilson Sons.

“WS Centaurus” is the first of six new tugs with an innovative concept in Brazil. With Damen RSD 2513 design, its hull features a more efficient hydrodynamics for an estimated reduction of up to 14% in greenhouse gas emissions. The twin fins improve seaworthiness and increase drag capacity during manoeuvres, which ensures smaller fuel consumption and, consequently, lower emissions. 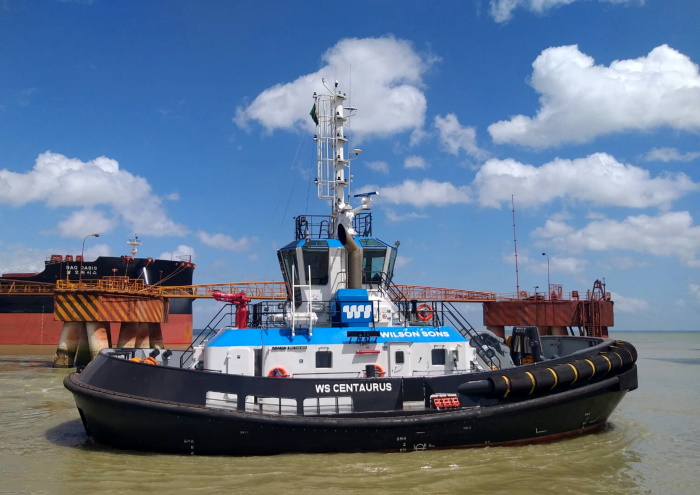 In addition, the new vessels are the first in Brazil to follow the IMO TIER III standard, which promotes reduced nitrogen oxide emissions by more than 75% and helps improve air quality in the ports where they operate. This standard is required in some regions of North America and Europe. Built at Wilson Sons’ shipyard in Guarujá (SP), designed by Damen Shipyards, the new tug is a 25-metre-long 13-metre-beam firefighting-certified (Fi-Fi 1) escort tug. Another two new tugs will be delivered later this year — and the others will come into operation in 2023.

Wilson Sons is the largest integrated port-shipping logistics operator in Brazil, with over 180 years of experience. The company operates all across Brazil and offers complete solutions to more than 5,000 clients, including shipowners, importers and exporters, oil & gas companies, renewable energy projects, agribusiness corporations, and other players in different businesses.
Source: Wilson Sons