The Wilson Sons’ Towage business unit ended 2021 celebrating five years of operations at Açu Port, one of the largest port-industry complexes in Brazil, located in the North Fluminense region of Rio de Janeiro.

The contract with Açu Port was signed in 2016 but, since 2014, Wilson Sons has been operating in the region, providing towage services for the export of iron ore through the port. “We even participated in operations that brought materials and equipment for the construction of the port complex”, comments Marcio Castro, executive director of the Towage unit.

The partnership between the two companies goes beyond the port support service. Before the port began operations, Wilson Sons and Açu Port teams studied in detail the best operating conditions and analyzed similar experiences in Brazil and abroad. Numerous tests and evaluations were carried out at the Wilson Sons unit’s Improvement Center (CAMWS) by the port and pilotage professionals.

“The efficiency, safety and growth of our partners and customers is the main focus of Wilson Sons’ work. A striking example of this is that we built two escort tugs designed for the specific needs of operations at Açu Complex. This contributed to the maneuvers being carried out with the effectiveness that the port needed”, recalls Castro. 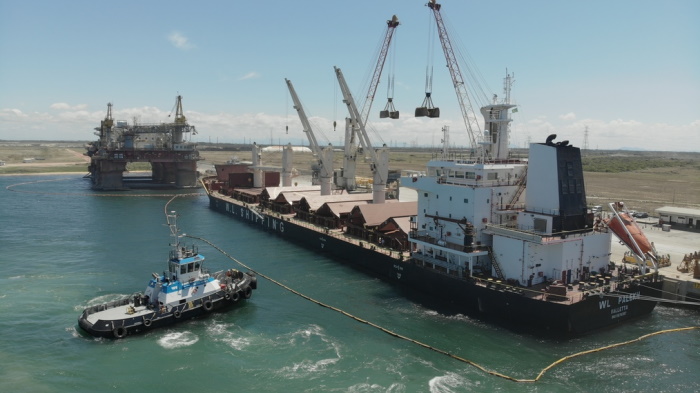 Today, the Company has eight high-power tugboats at Açu, three of which are certified for fire fighting – FiFi1. All are able to perform maneuvers in entry and exit operations of ships of Panamax, Aframax, Capezise, Suezmax, VLCC and LNGC type, in ballast and loaded.

“It is with great satisfaction that we celebrate these years together with Wilson Sons. With a specialized fleet, highly trained team, in addition to safety systems and operation planning, we work in partnership with a high level of availability and reliability in port operations”, highlights Vinícius Patel, director of Port Administration at Açu Port Operations.

The year 2021 also marked the five-year partnership with Açu Petroleo, a company that has been operating the oil terminal (T-OIL) at Açu Port since 2016. In addition, Wilson Sons Towage supports the maneuvers of gas carriers to transfer liquefied natural gas (LNG) to the regasification terminal that supplies the GNA’s thermoelectric plant.

Innovation for the development of the Brazilian port and maritime sector

The focus on innovation is a common point between companies. The use of state-of-the-art technology at Wilson Sons’ Towage Operations Center (COR), which completed a decade of operation in 2021, was a successful case for the implementation of the Açu Port Operations and Emergency Response Center. Both use VTS (Vessel Traffic Service) functionality through AIS (Automatic Identification System) antennas for real-time monitoring, 24 hours a day, of vessels at the terminals.

And the partnership is yielding other fruits. Wilson Sons has been carrying out tests in Açu Port of the unprecedented technology for monitoring the seabed developed by the Israeli startup DockTech. The Company has a minority interest in the startup and a commercial exclusivity agreement for the implementation of the technology in Brazilian ports. “The investment is part of our strategy to promote innovation and the development of national port and shipping infrastructure”, says Castro.

For Açu Port, the innovation agenda is also a priority. “We continue together with Wilson Sons, promoting sustainability, technological development and innovation actions to strengthen our sector in Brazil, being a reference in the actions we have at Açu, including internationally”, emphasizes Patel.

With a fleet of 80 tugboats, the largest in Brazil, Wilson Sons is present in 25 locations, covering almost the entire Brazilian coast. The Company has the Towage Operations Center (COR), which monitors the vessels 24 hours a day, 365 days a year, in addition to the Maritime Improvement Center (CAMWS) where crews are regularly trained and specific projects for customers and other stakeholders are carried out, with a specialized technical team recognized throughout the market, through Wilson Sons’ own maneuver simulator, which is capable of offering different operational scenarios.
Source: Wilson Sons