Wilson Sons has added 33% to the operational capacity of its river terminal Tecon Santa Clara, which operates in integration with Tecon Rio Grande. The expansion took place in June upon replacement of the vessel Trevo Roxo, with a capacity of 120 TEUs (twenty feet equivalent units), with Guaíba, of 160 TEUs. This addition generates commercial opportunities in Rio Grande do Sul, boosts inland waterway transport and greatly supports the development of more sustainable logistics projects, as it helps reduce the emission of greenhouse gases.

Wilson Sons’ operation at Tecon Santa Clara, which completed five years in October 2021, reached the mark of 220,000 TEUs transported on the waterway. The high traffic at Wilson Sons’ river terminal earned the company the Portos + Brasil 2021 award from the Ministry of Infrastructure, which recognizes the best practices adopted by Brazil’s ports. 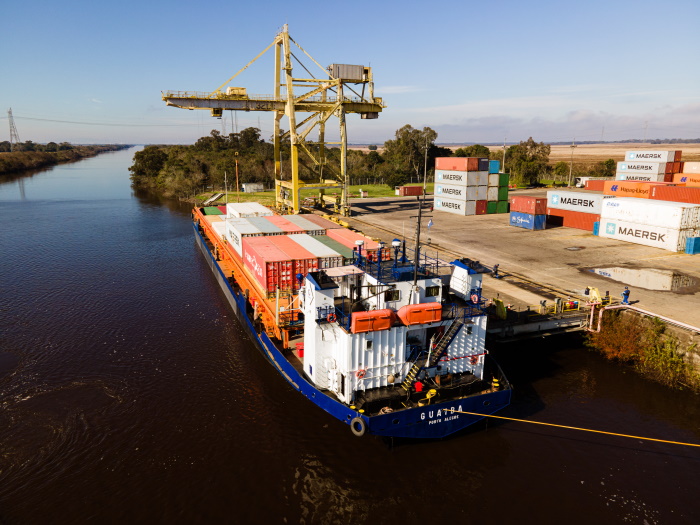 “The higher volume of operations at Tecon Santa Clara demonstrates its relevance for the economic development of Rio Grande do Sul and its participation in the international market. Over these five years, we have been expanding our operations and logistics partnership with major companies pursuing distinguished transport options through waterways, which shortens distances, adds safety to the goods and is less polluting,” says the CEO of Tecon Rio Grande, Paulo Bertinetti.

Tecon Santa Clara started its operations with a vessel in October 2016, when the partnership between Wilson Sons and Braskem reactivated Pier IV and brought back cargo transport along the river Jacuí, between Triunfo and the Port of Rio Grande. Two years later, Wilson Sons expanded its capacity by providing one more vessel, offering four trips a week. Altogether, more than 130 clients are served.

Resins, timber, frozen chicken, rubber, parts and household items represent 90% of the goods transported through Tecon Santa Clara. The goods — for import, export and national transport — have their origin or destination in the cities of Farroupilha, Carlos Barbosa, Garibaldi, Caxias do Sul, Veranópolis, Cruz Alta, Lajeado, Taquari and Serafina Corrêa. The services provided at the terminal include loading and unloading containers.
Source: Wilson Sons

2022-07-07
hellenicshippingnews...
Previous: Zeleros will locate in the Port of Sagunto its test track to move containers with the hyperloop system
Next: Sales success for the Hamburg Office of EST-Floattech