Winning projects of the #IAPH2022 Sustainability Awards are announced

IAPH is delighted to announce the winners of the #IAPH2022 Sustainability Awards during the official gala dinner of the IAPH World Ports Conference, which has taken place at the Vancouver Convention Centre waterfront venue in Canada.

IAPH Technical Director Antonis Michail commented : “With projects from 26 different countries this year, we are delighted to see that such a diverse group of winners have been selected from the Americas, Europe, Asia and Oceania by the jury and voters.”

DP World Posorja (DPWP) as part of its global strategy “Our World, Our Future”, and the Ocean Enhancement Program began a Mangrove Plantation Program on 65 hectares with the Calisur Foundation in Guayas province, Guayaquil canton, Puna Island, involving the local community. This program aims to create blue carbon ecosystems through mangroves in Ecuador with the aim of capture CO2 emissions and minimizing DP World’s environmental impact. The ability of these vegetated ecosystems to remove carbon dioxide (CO2) from the atmosphere makes them significant net carbon sinks.

The purpose of PASSport is to engineer and qualify a solution extending situational awareness to improve safety and security in port areas. The PASSport solution will complement existing operational platforms extending the surveillance perimeter using a fleet of air and underwater drones to provide innovative operational support to the safety and security aspects of daily operations. It will take particular attention to pollution monitoring, support to e-navigation, critical building and infrastructure protection, protection against non-cooperative small craft approaching the port areas and the monitoring of underwater threats.

The EU-funded SeaClear-Project (2020-2023) is working on developing an efficient, cost-effective, and innovative solution for the detection and collection of marine debris of which 94% is estimated to be found on the seabed itself. A team of autonomous robots finds and collects seabed litter. Underwater detection sensors allow them to operate under low-visibility conditions. One robot identifies litter using deep-learning artificial intelligence trained to differentiate between marine wildlife and debris. The collection is performed by a larger robot that navigates to the location where waste has been found and removes it using a gripper-suction device. This process is carried out in strict compliance to nature conservation standards.

Northport Malaysia formulated a strategic roadmap to operate its business activities to the highest level of Health, Safety and Environment (HSE) standards in their journey towards achieving HSE excellence. Their journey started with the ‘Transformation’ phase in 2012 to promote mindset and behavioural change. In 2016, the focus was shifted to ‘Effective Implementation’ to enforce all the actions towards achieving HSE goals. In 2019, Northport embarked on ‘Sustenance and Continuous Improvement’ to strengthen the best HSE practices among our stakeholders. Finally, the ‘Business Resilience and Continuity’ phase was enforced as of 2020 to seal their commitment towards business continuity management.

The LIVING PORTS project is a European Commission Horizon 2020-funded project to facilitate a large-scale implementation at the Port of Vigo. It is designed to catalyse a fundamental change in the Coastal and Marine Infrastructure (CMI) industry’s operations, shifting away from obsolete “grey” construction and towards nature-inclusive infrastructure with structural, environmental, and socio-economic co-benefits. The project includes 100 ECOncrete Coastalock units to provide coastal stabilization as well as habitat creation and ecological uplift and a 330m² ECOncrete sea wall with underwater monitoring and community outreach deck developed by Cardama Shipyard for public viewing. 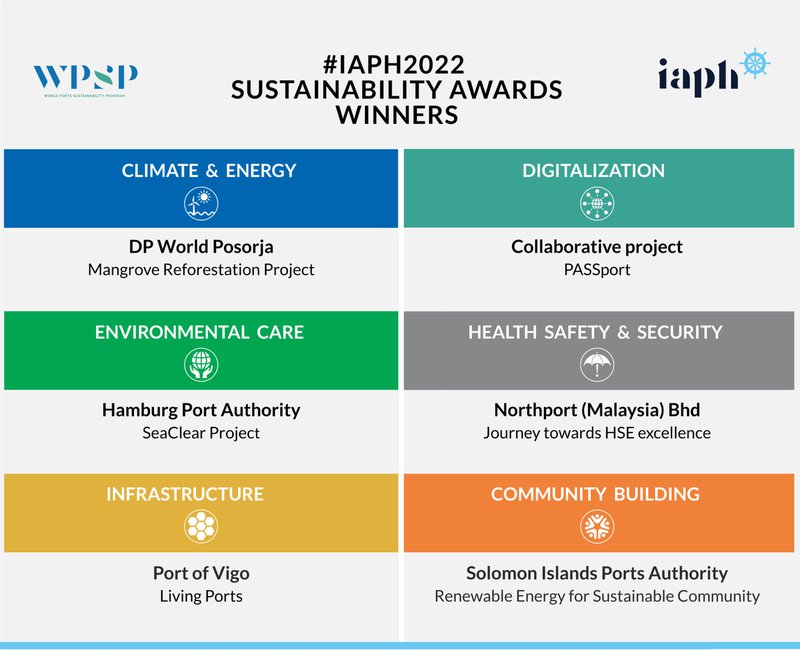 As part of the extension of their port-community dialogue, Solomon Islands Ports Authority embarked on this project to support rural communities by providing renewable energy for those who previously could not access any form of energy. The Ports Authority has already reached out to communities across Solomon Islands, with five communities already being the first recipients of our initiative, providing lights to over a hundred families. These major community lighting projects include Tulagi Town streetlight, Madili School lighting, Noro Market, Sepi Village community hall, and common streetlights. More communities have already been identified for this initiative across all the nine provinces, and the team will be implementing more installations this year.

Special Akiyama Award
At the gala dinner, IAPH also presented the Akiyama Award which is in memory of one of IAPH founding fathers Toru Akiyama, who was Secretary-General of IAPH from 1967 to 1973. This award was originally an essay competition open to young port talent.

Fiji Ports Corporation Limited, operating across the Fiji Islands, is focusing on alleviating climate impacts through the Green Port Initiative by 2023.

Pacific Island developing countries, like Fiji, are vulnerable to climate change and sea level rise due to their limited land masses, natural, human and economic resources, and their dependence on marine resources for livelihood. Fiji Ports play an important role in trade, logistics and the survival of many Pacific Island nations. Understanding the Port’s significance and impact, the Green Port Master Plan 2019-2023 has been launched, aligning to the Port’s vision of being the Smart, Green Gateway for trade in the Pacific Region, which outlines the pathway to reduce its environmental footprint and combat climate change.

Special recognitions for two exemplary IAPH members
To conclude the gala awards, IAPH’s President, Captain Subramaniam Karuppiah paid special tribute to two dear colleagues who in their careers have made an outstanding contribution to the Association.

The first was for his predecessor as IAPH President, Santiago Garcia Milà, who was at the helm of the organisation from 2015 to 2021. His commitment to IAPH goes back much further; to the year 1996, when he joined as chairman of what was then the Trade Facilitation and Port Community Systems Committee.

The second colleague was Frans van Zoelen, who retired last month from the Port of Rotterdam. Frans has been chairman of the IAPH Legal Committee since 2004 and has been the Association’s trusted Legal Counsellor. Like Santiago, his commitment to IAPH covers a much longer period and goes back to the year 1997.

IAPH President Captain Subramaniam Karuppiah commented : “Both Santiago and Frans have contributed to our work for more than 25 years. They can without exaggeration be called the architects of IAPH as we know it today: a dynamic and forward-looking organisation that is committed to assist members in facing the generational challenges that mark the environment in which ports operate. The new IAPH Constitution that came into effect in 2016 has enabled a major transformation, which is very much their legacy.”
Source: International Association of Ports and Harbors