Women’s International Shipping and Trading Association (WISTA) elected Connie Roozen, Director of C&B More (WISTA the Netherlands) as Treasurer and Angie Hartmann, Vice President Crew Affairs, Starbulk S.A. (WISTA Hellas) as Board Member, to the WISTA International Executive Committee at their 38th International Annual General Meeting in TromsØ, Norway on October 24, 2018. Sanjam Gupta, Director Sitara Shipping Ltd (WISTA India), was re-elected to a third term on the Executive Committee. Kathy Metcalf, CEO of the Chamber of Shipping of America, was honored as the 2018 WISTA International Personality of the Year.

Connie Roozen is Director at C& B More, a tax consultancy firm. Roozen has served as Treasurer for WISTA the Netherlands since 2014. She takes over the position from Rachel Lawton (WISTA UK), who has reached her term limit on the committee.

“I am looking forward to empowering women in the shipping and trading industry around the globe,” said Roozen. 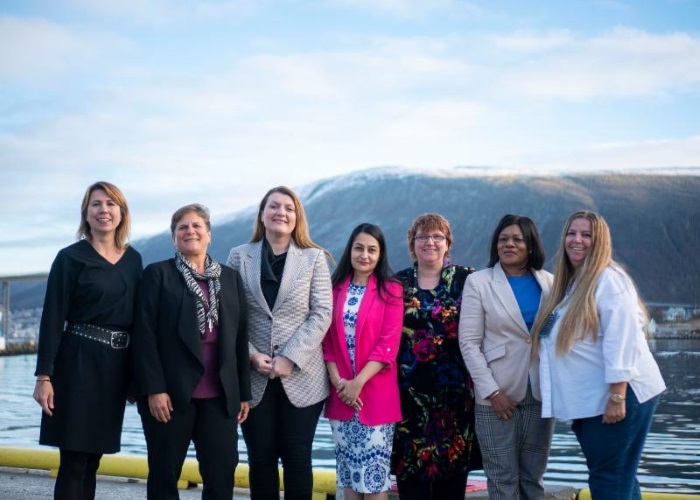 Angie Hartmann is President, Crew Affairs at Starbulk S.A., a global ship management company. Hartmann has been an active WISTA Hellas member since 1996 and has served as President of WISTA Hellas since 2014. She takes over the position from Katarina Stathopoulou (WISTA Hellas), who has reached the committee term limit.

“I am honored to have been elected to serve on the Executive Committee and continue the great work of all the dynamic women who have served before me. We are striving toward building avenues for more and more women to make a difference in the maritime world and equalize opportunity,” said Hartmann.

Sanjam Gupta was re-elected to her third term as a WISTA Executive Committee Board Member. Gupta founded WISTA India in 2012 and served until recently as the association’s president. Gupta also serves on the Executive Board of the World Maritime University.

“I am honored to be re-elected to a third terms as an Executive Committee member looking after the Asia Pacific and Middle East region. This region makes up more than a third of the global economy and half of the world’s population – there is great potential to have more NWAs in the region for the benefit of WISTA members all over the globe,” said Gupta.

Kathy Metcalf, CEO of The Chamber of Shipping of America, was honored as the 2018 WISTA International Personality of the Year at the Annual General Meeting. Metcalf, a fixture of the international maritime industry, was a pioneer for women in the industry, graduating with the first class of female merchant marines from the United States Maritime Academy in 1978. Today, Metcalf continues to be a force advocating for inclusion and equality in the industry. In addition to her role as CEO, Metcalf is also the Chairman of the International Chamber of Shipping’s Environmental Sub-Committee. Metcalf was nominated for the honor by WISTA USA.