Without Ukrainian And Russian Seafarers, Chaos Looms At Sea

After months of being trapped at sea due to the pandemic, the current war in Ukraine is holding hundreds of thousands of seafarers hostage from the global merchant fleet. There are indeed many seafarers of both Ukrainian and Russian nationalities working on board ships. Many Ukrainian seafarers yearn to go home whilst the sanctions are making it harder to sign on Russian seafarers.

This can have a major impact on maritime transport. Together, Russia and Ukraine account for nearly 15 percent of the world’s 1.89 million seafarers. According to the latest Seafarers Workforce Report from 2021, both countries are also among the top five countries with the highest number of seafarers: Russia has 198,123 seafarers, while Ukraine has 76,442. A significant majority of them – in the case of Ukraine – are officers. Many of these work on gas or oil tankers and on container ships.

The International Chamber of Shipping, the global organisation that represents 80 percent of the merchant fleets, is not at ease with the situation. Last week, it warned that the labour shortage in global shipping will only worsen following Russia’s invasion of Ukraine.

Wilfred Lemmens, Managing Director of the Royal Belgian Shipowners’ Association, was very forthcoming about the consequences: “It will be a major challenge to find sufficient seafarers worldwide if the war continues. That could cause a huge disruption to the entire global maritime transport.” Around 5,000 seafarers who work on Belgian merchant ships with no less than a fifth coming from either of the two countries. 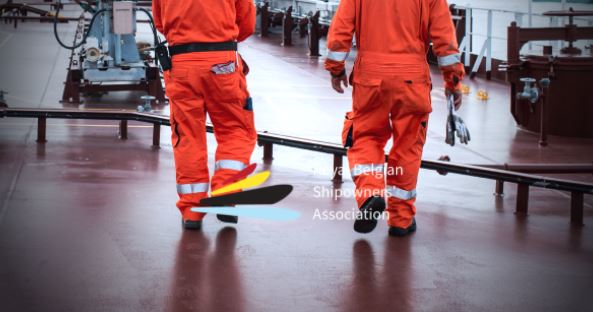 Ukrainian seafarers are currently facing a horrific dilemma. Many of them come from cities by or near the Black Sea, such as Kherson and Mariupol, and these cities are currently undergoing massive destructions from the fighting. These seafarers therefore want to go back as soon as possible to evacuate their families to safer places. Others want to take up arms to defend their country.

According to the President of the Ukrainian trade union for maritime transport workers, Oleg Grygoriuk, who was quoted in the Financial Times last week, around 55 to 60 percent of the 80,000 Ukrainian seafarers are currently at sea. About a fifth of them want to go ashore as soon as possible to defend their country.
Meanwhile, the growing isolation of Russia makes it increasingly difficult – if not impossible – to pay the wages of the Russian seafarers, due to the severe restrictions to the country’s access to Swift, the main international payment system. At the same time, it is becoming harder to get them to where they are needed, due to the closure of many air connections to and from Russia.
Source: Royal Belgian Shipowners’ Association