Yesterday, cutter man Shahidul lost his life while working at Kabir Steel’s Khawja shipbreaking yard in Chattogram (f.k.a. Chittagong), Bangladesh. According to local sources, Shahidul was cutting the container ship EVER UNION (IMO 9116618) when he fell from a great height. He died on the spot.

Kabir Steel’s shipbreaking yards are part of the large industrial conglomerate of Kabir Group of Industries. The NGO Shipbreaking Platform has documented several severe and fatal accidents in the company’s yards over the last years. In 2017 and 2018 alone, at least four workers were killed. In 2016, Kabir Steel’s private security personnel fired shots and injured seven people who were protesting following the death of shipbreaking worker Sumon. 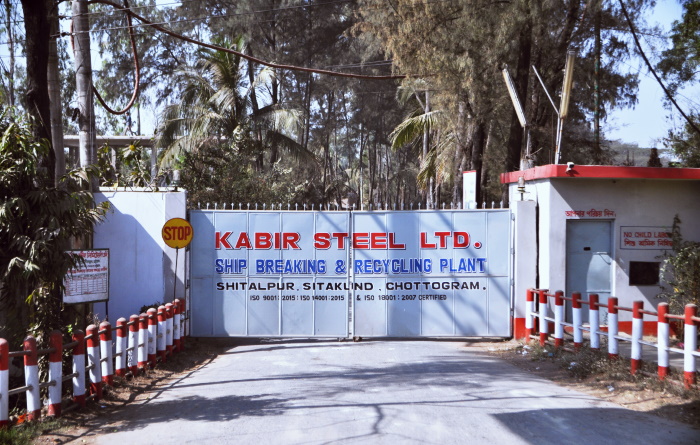 The vessel EVER UNION was beached in Bangladesh on April 19. It was owned by Taiwanese shipping giant Evergreen Marine, which has been under the spotlight for its irresponsible shipbreaking practices. In January 2018, Norwegian Central Bank announced its decision to exclude Evergreen from the Government Pension Fund Global, due to the ship owner poor management of its end-of-life ships and the sale of these for dirty and dangerous breaking on the infamous beach of Chattogram. Since then, the company has clearly not changed its policy. Five vessels, including the EVER UNION, ended up in Bangladesh this year. Three of them were allegedly sold to shipbreaking yards owned by Kabir Steel.

The EVER UNION was sold for scrapping for more than $10 million. Before reaching the shore, the ship was renamed VERA and changed registry to the Paris MoU black-listed flag of Palau. According to maritime databases, the company Nabeel Ship Management, based in the United Arab Emirates, is linked to the end-of-life sale. Nabeel has been recently involved in the attempted illegal export of the vessel HARRIER from Norway, where police investigations, now headed by the financial crimes division, are still ongoing.

Despite activities being slow due to the monsoon rains, accidents keep occurring. According to Platform’s member organisation YPSA, another worker lost his life in Chattogram in the beginning of July. Md Mamun Hossen, 35 years old, died at Tahsin Steel Corporation yard.

“Twenty workers lost their lives in 2018. The number of deaths was the highest in last eight years. These two recent accidents bring the total death-toll of the shipbreaking industry this year to at least ten workers. Clearly, no lesson has been learned. Accidents keep happening, indicating a complete lack of intention from yard owners to ensure workers’ safety”, says Muhammed Ali Shahin, Project Coordinator at YPSA.
Source: NGO Shipbreaking Platform

2019-07-24
hellenicshippingnews..
Previous: Research confirms that air quality in Magnitogorsk has improved
Next: Interlegal lawyers recovered debt amounting to 90,000 USD for the bunkering company