World Fleet To Grow By 6.4% Over The Coming Five Years, Down From 7.4% In Previous 5 Years

Global shipyards are under pressure and 2021 is turning out to bring the third lowest level of newbuilding orders in 12 years, despite new orders for containerships currently at a 14-year high.

Also under pressure are seafarers who, during the pandemic, have in many cases faced the challenges of being stuck on board ships for many months after their contracts ended, despite their crucial role in helping world trade flow uninterrupted. As we approach 25 June, The International Day of the Seafarer, these essential workers deserve support, also in the future.

The expected demand for seafarers in the future is impacted by the forecasted growth in the world fleet. The trading world merchant fleet had a capacity of 74,505 ships across 11 main segments covered by the BIMCO ICS Seafarer Workforce Report 2021, at the start of 2021. In the baseline scenario, the total fleet is projected to reach 79,282 by the end of 2025. 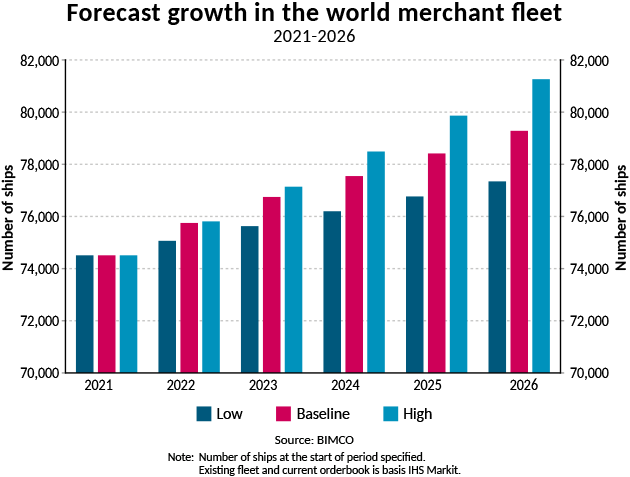 From 2021 onwards, BIMCO projects the fleet to have an annual compound growth rate (CAGR) of 1.25% in a baseline scenario until the start of 2026. The CAGR for the previous five years being 1.44%. In addition to the baseline, a low and a high scenario is provided for to consider the impact from various degrees of uncertainty to the future number of ships in the market.

What if global trade becomes weaker or stronger than anticipated?

In a scenario where a weaker-than-the-baseline outlook for global trade is considered, the fleet will grow at a slower pace and is expected to have an annual compound growth rate (CAGR) of 0.75%. In the low growth scenario, there will be on average 567 ships entering the fleet every year, a significant decline from the baseline average of 955. With a brighter outlook for global trade, the world fleet is set to exceed 80,000 ships during 2025, with a set annual growth rate of 1.75%

In any scenario, the number of ships in the world fleet will go up

The world merchant fleet is expected to grow in all three scenarios over the upcoming years If the world is the heart, the ships are the arteries for trade. In other words, the industry needs a growing number of arteries and talented and supported seafarers to make the world go and support the increasing population and globalisation.

The most substantial growth rate by any of the considered 11 segments during 2020 through 2025 will likely be the LNG tankers. The LNG tanker fleet currently count 593 ships, and 85% of the fleet can be found within the cargo carrying capacity range of 100,000-200,000 cubic metres. 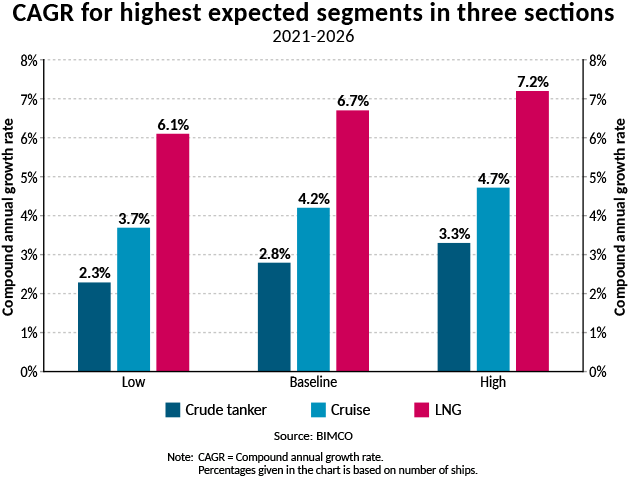 BIMCO expects this fleet in the baseline scenario to have an annual compound growth rate (CAGR) of 6.7% and an end balance of 819 ships at the end of 2025. Depending on the scenario in question, the fleet may vary between 799 ships in a low growth scenario, increasing to 839 ships in a high growth scenario.

Cruise liners are also expected to see significant fleet growth by 2026. Despite being the second smallest segment of the world merchant fleet by numbers, with an end-year 2020 total of 621 ships, the cruise lines are expected to increase with a compound annual growth rate of 4.2% on a baseline scenario. Regardless of a low or high growth scenario, the fleet will deviate with 19 ships from the baseline of 763 ships in 2026.

The crude tanker fleet consists of 2,976 ships, according to the IHS Markit dataset used for this purpose, and 34% of that fleet consist of ships in the range of 80,000-120,000 deadweight tonnes. While the crude tankers have faced a rough patch during the pandemic, the fleet has seen more than 40 new orders during the year to date. Additionally, the fleet is expected to expand in the longer term by 2.8% on average each year until the end of 2025, with VLCC driving most of the growth.
Source: BIMCO, By Peter Sand, Chief Shipping Editor