The world again needs the shipping industry to brave the rough seas of crises, UNCTAD Secretary-General Rebeca Grynspan said on 22 September as she addressed the Global Maritime Forum’s annual summit.

Speaking at a New York navy yard dubbed the “can-do shipyard” at the height of World War Two, Ms. Grynspan said maritime trade is facing a “historic moment of crisis”.

The war in Ukraine has disrupted major shipping routes and supply chains. It has also triggered global food, energy and finance crises that have sparked record prices and could push tens of millions more people across the world into hunger and poverty this year.

Maritime transport has a key role to play in cushioning the blow, since ships carry over 80% of the goods the world trades – including most of the food, energy and fertilizers people desperately need right now.

Ms. Grynspan lauded the work already done to help load and transport food and fertilizers from Ukraine under the Black Sea Grain Initiative brokered by the United Nations and Türkiye. 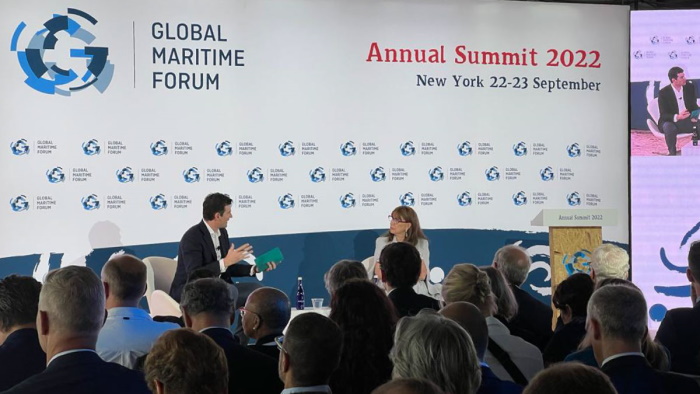 “I have seen you sail through literally mined waters. I have seen you work the ports in the middle of a war zone,” she said.
But she called on the maritime industry to redouble its efforts.

“There are rougher seas ahead, and we will need your bravery more than ever before.”

Bringing down food prices
Globally, a record 345 million people in more than 80 countries are currently facing acute food insecurity, according to the UN.

As of 12 September, the Black Sea Grain Initiative had enabled over 2.7 million metric tons of grain and other foodstuffs to move from the Ukrainian ports of Odesa, Chornomorsk and Yuzhny (Pivdennyi).

The UN points out that all the grain coming out of the three Ukrainian ports thanks to the initiative benefits people in need, as it helps to calm markets and limit food price inflation.

The initiative is succeeding in one of its key aims: bringing food prices down.

The UN Food and Agriculture Organization’s Food Price Index showed double-digit percentage drops in the cost of vegetable oils and cereals in July and a further 1.9% fall in August

“The Black Sea Grain Initiative and the agreement for unimpeded access to Russian food and fertilizers are now proven concepts,” Ms. Grynspan said.

“But this is only a fraction of what can be done, and what the world needs for prices to come down to affordable levels for the developing countries, or for the world to have enough fertilizers to feed itself next year.”

Even though global food prices are falling, domestic prices in many developing countries are still going up as their currencies struggle to compete with a stronger US dollar, fuelled by rising interest rates.

Preventing lost sowing seasons
Ms. Grynspan said the price of fertilizer – currently three times higher than the average during the previous decade – is particularly worrying since it’s the top input cost for many small farmers around the world.

If farmers cannot afford or don’t have access to the fertilizers they need, they won’t be able to plant their crops.

“We have already lost a sowing season in West Africa because of this,” Ms. Grynspan said.

If the fertilizer market isn’t stabilized, the whole food supply system could be in trouble.

“The food affordability crisis that we are dealing with today may become a food availability crisis next year because of the fertilizer issue if we don’t intervene,” Ms. Grynspan said.

“We need more ships. We need bigger ships,” she said. “We need you. The world needs you.”

“The seas are rough. Let’s brave them together.”
Source: UNCTAD