Danfoss Editron has been commissioned by the Grovfjord Mek. Verksted (GMV) shipyard to deliver the hybrid drivetrain systems for a fleet of robot exploration vessels. The unmanned surface robots will be launched by subsea technology and data company Ocean Infinity under a spin-out firm called Armada.

The autonomous vessels will be capable of launching remotely operated underwater vehicles to a maximum depth of 6000m that will carry out surveys on pipeline routes or acquire seismic data. They will operate without a nearby host vessel and instead be controlled via satellites from onshore facilities in the U.S. state of Texas and U.K. city of Southampton. 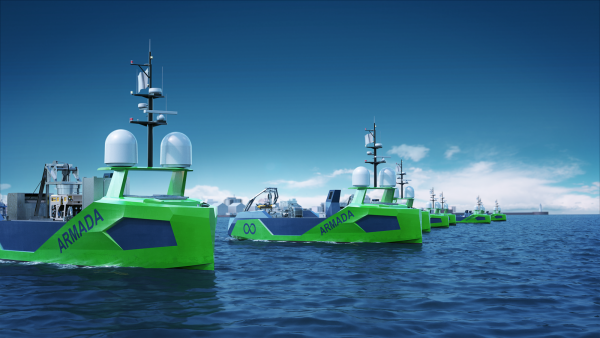 Danfoss Editron is delivering the full hybrid-electric propulsion and power plant system for the fleet, consisting of a combination of batteries and diesel-generators. The company will also provide the energy management system and propulsion control for each vessel. The engines for the surface robots will be delivered by leading manufacturer Volvo Penta. The Volvo Penta D8 MH variable speed engine will power the marine generator sets onboard. This all-new D8 engine is a perfect match for the autonomous vessels due to its compact size and high power-to-weight ratio. Additionally, the engine’s low fuel consumption plays a big role in the significant CO2 emissions reduction.

The new Armada autonomous fleet does not require a host vessel, thus emitting up to 90% less CO2 emissions compared to conventional oceanographic survey methods, saving approximately 31,000 tonnes of CO2 a year. The boats will offer significant fuel savings and optimised operational performance, while they will also be safer than traditional exploration vessels as no staff will be required to work at sea.

“It is actually the first time that a commercial autonomous fleet in being developed, rather than just being a prototype. We are very proud to have been chosen by GMV as their technology partners for this groundbreaking project.”

“We’re also excited to continue our cooperation with GMV on the Armada project. It is one of the largest aluminum hull vessel builders in the world and has a strong history of delivering high-quality boats,” Erno added.

“Volvo Penta is delighted to be part of this groundbreaking project in cooperation with Danfoss Editron. Together, we will deliver an optimized power solution to the autonomous Armada fleet, designed for ultimate performance while reducing the environmental footprint.”

The first four vessels in the Armada fleet are due to be delivered to Ocean Infinity in 2021, with the remaining seven robots completed in the next months.
Source: Danfoss