Co-sponsors of three separate environmental talks at the WTO announced on 13 June, at the 12th Ministerial Conference (MC12), the concrete steps they are taking to advance work on plastics, fossil fuel subsidy reform, and environmental sustainability to pave the way for outcomes that will harness trade for the planet’s protection. Deputy Director-General Xiangchen Zhang lauded the members’ determination to implement their work plans amid the urgency posed by food, health and climate crises.

“MC12 is a good opportunity to underline again the importance of these environmental initiatives in emphasizing that trade has to be part of the solution,” DDG Zhang said at the start of the back-to-back press briefings by each group – the Informal Dialogue on Plastics Pollution and Sustainable Plastics Trade (IDP), Fossil Fuel Subsidy Reform (FFSR) and the Trade and Environmental Sustainability Structured Discussions (TESSD). “I commend the initiatives for immediately starting their work after the launch of their ministerial statements, with the adoption of clear and tailored workplans,” he said.

“The triple planetary crises respect no borders and have a negative impact on all our peoples, everywhere. And we know that the poorest among us, without the proper means to adapt and protect their livelihoods, will be those most hard hit,” DDG Zhang said, noting it was essential to encourage and support developing countries and least-developed countries to participate. “I encourage the co-sponsors of each group to put their ambition into action,” he added.

On 15 December 2021, co-sponsors of the three environmental initiatives launched their respective ministerial statements, paving the way for technical meetings to move discussions forward on concrete outcomes to be delivered by the 13th Ministerial Conference. Two months later, in February 2022, the IDP and TESSD agreed on work plans to implement objectives cited in the respective ministerial statements, while the FFSR work plan was issued on 10 June.

At MC12, the coordinators of the dialogue on plastics pollution — Australia, Barbados, China, Ecuador, Fiji and Morocco — issued a Ministerial Statement to report on tangible steps they are next taking, noting as well the United Nations Environment Assembly resolution to launch negotiations with the goal of forging a global agreement by 2024 to end plastic pollution. The group comprises 72 members representing over 75 per cent of global plastics trade. Access further information on the Ministerial Statement and press briefing here. 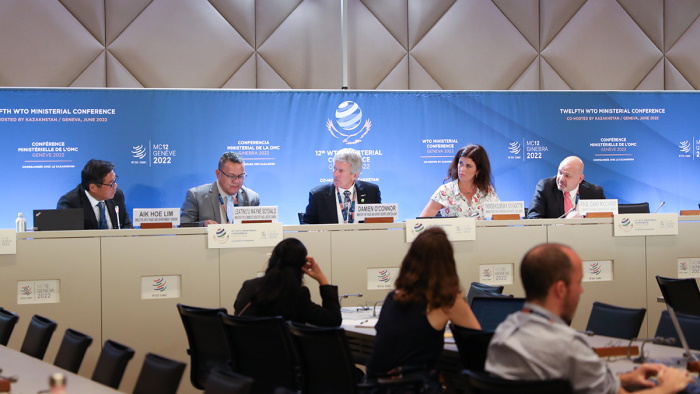 Regarding FFSR, co-sponsors at the event highlighted the recent adoption of their work plan to guide efforts for the reform of fossil fuel subsidies at the WTO. The plan sets out three meetings from 2022 to 2023 open to all WTO members and interested stakeholders to take stock of efforts, evidence and priorities on the matter, consider social aspects of the reforms and discuss next steps towards MC13. The group, led by New Zealand as coordinator, also welcomed Samoa and Paraguay as the newest co-sponsors, bringing the total number of participating members to 47.

For TESSD, Costa Rica, which coordinates the group with Canada, reported on the group’s progress, including through the establishment of four informal working groups on environmental goods and services, trade-related climate measures, circular economy and circularity, and subsidies. Brazil, Tajikistan and United Arab Emirates were also welcomed as the most recent of the 74 members of the initiative, which together cover over 85 per cent of world trade.

“These informal working groups are expected to deliver more clarity on the state of play in each of the substantive areas in a high-level stocktaking event we will be organizing here at the WTO by the end of the year,” Costa Rica Minister of Foreign Trade, Manuel Tovar, said at the event. “We hope that the discussions across these areas will begin to deliver positive results as we move towards MC13.”

New Zealand Minister of Trade and Export Growth, Damien O’Connor, speaking for FFSR said: “Co-sponsors seek the rationalisation and phase-out of inefficient fossil fuel subsidies along a clear timeline. Co-sponsors have now adopted a work programme to guide our efforts over the coming months. This is to help us in our objective to elaborate concrete options for advancing this issue within the WTO in advance of MC13.”

Ambassador Chenggang Li (China), speaking for the IDP, said: “At such a historic moment, especially with the UNEA resolution launching negotiations on a new treaty on plastic pollution, we believe our work at the WTO is more important than ever. The WTO can play its unique role in identifying trade and value chain challenges and opportunities to inform other international processes and taking collectively actions to support global efforts to reduce plastic pollution.”

Environmental considerations are part of the WTO’s mandate. The preamble to the Marrakesh Agreement Establishing the WTO states the goal of“expanding the production of and trade in goods and services, while allowing for the optimal use of the world’s resources in accordance with the objective of sustainable development, seeking both to protect and preserve the environment and to enhance the means for doing so in a manner consistent with their respective needs and concerns at different levels of economic development”.

A Committee on Trade and the Environment (CTE) was established at the start of the WTO in 1995 with a mandate to identify and understand the relationship between trade and the environment in order to promote sustainable development. The CTE plays an important role in examining the nexus between trade and environment and serving as a forum for discussion and experience sharing among all WTO members.
Source: World Trade Organization

2022-06-16
hellenicshippingnews...
Previous: Baltic index extends gains on jump in capesize segment
Next: Fed hikes by 75bp with the same again for July