The new year has not brought much more relief to the container shipping market, especially on the main fronthaul trades. Pre-Chinese New Year demand and continued congestion keep spot rates elevated, while carriers’ upper hand in the ongoing negotiations for long-term contracts mean these are seeing large jumps from levels at the start of last year. Volumes on the long-term market will grow this year as carriers want to secure revenue and many shippers want to secure capacity and avoid the pain they have felt on the spot market over the past year. This means that even if spot rates soften over the year, the average cost of shipping this year will be higher than ever before.

On two of the four major trades out of the Far East, spot rates have continued to rise to new record highs. From the Far East to North Europe and to the Mediterranean, rates have risen by 6% and 2%, respectively, reaching USD 15 400 per FEU and USD 13 700.

From the Far East to the US, rates have risen compared to a month ago for boxes going to the East Coast, though at USD 10 700 are down slightly from their peak in the second half of December 2021. On the other hand, spot rates to the US West Coast have fallen ever so slightly in the past month, down 1% as the clogged-up ports mean importers are looking for alternative solutions.

Spot freight rates on backhaul trades have started the new year in the same way as they ended the last one, with rates falling after they peaked in May 2021 for boxes going from North Europe to the Far East and in July for those going to the Far East from the US, though they remain above pre-pandemic levels.

There have been 11% drops on spot rates from both the USEC and WC going into the Far East, with rates on both backhaul trades landing at around USD 1 100 per FEU. 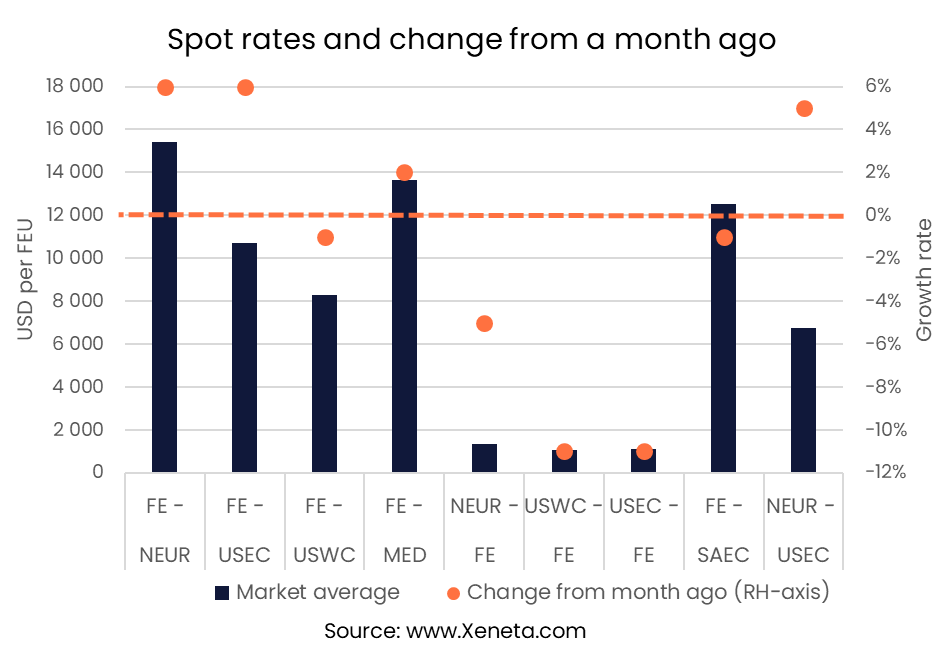 Though it is still early for a definitive answer on where long-term rates in 2022 will land, it is clear that fronthaul rates will rise considerably. For example, long-term contracts from the past three months are averaging USD 9 300 per FEU on the Far East to North Europe trade, which is closer to a three-fold increase from the same number in 2021 than a doubling.

Backhaul long-term contracts have seen a much smaller increase from January last year, as they are now averaging USD 1 300 per FEU, which represents an increase of only USD 160 from January 2021.

We are much earlier in negotiations for long-term rates going into the US than for those from the Far East to Europe, but shippers should brace for sharp increases in the rates they are paying. Currently, the Xeneta platform shows that long-term contracts signed in the past three months from the Far East to the US East Coast have gone from USD 3 700 in January 2021 to USD 7 000 this year.

Just as with spot freight rates, long-term contracts on the transpacific have been softening in recent months, though again remain far above levels from the start of last year. There is still plenty of negotiating to be done and contracts to be signed, but there is no doubt that even if lower than the peaks of last year, long-term rates here will be much higher than in contracts signed a year ago.
Source: Xeneta