Among most global trades, intra-Asian rates have seen considerable increases in recent years, though the costs on the world’s busiest container trade have not risen as quickly as in other places. In the first half of January, spot rates from the main Chinese ports to the main Japanese and South Korean ports have risen back above USD 1 800 per FEU. This comes after spot rates on this trade had been mostly flat in 2021 at USD 1 400 (up from an average of USD 640 in 2020).

Though the increases are smaller than on some other major head haul trades, the higher spot prices can still have a considerable impact. Considering that many of the goods on these intra-Asian trades are intermediate goods moving between factories in the region, doubling spot freight rates can often add considerable costs to the manufacturing process, forcing manufacturers to reconsider their manufacturing and supply chains across the region.

Going the other way, from the main ports in Japan and South Korea to China, rates have fallen compared to a year ago. In January 2021, they averaged at 1 700 USD per FEU. However, after a few weeks in 2022, rates are closer to USD 800. 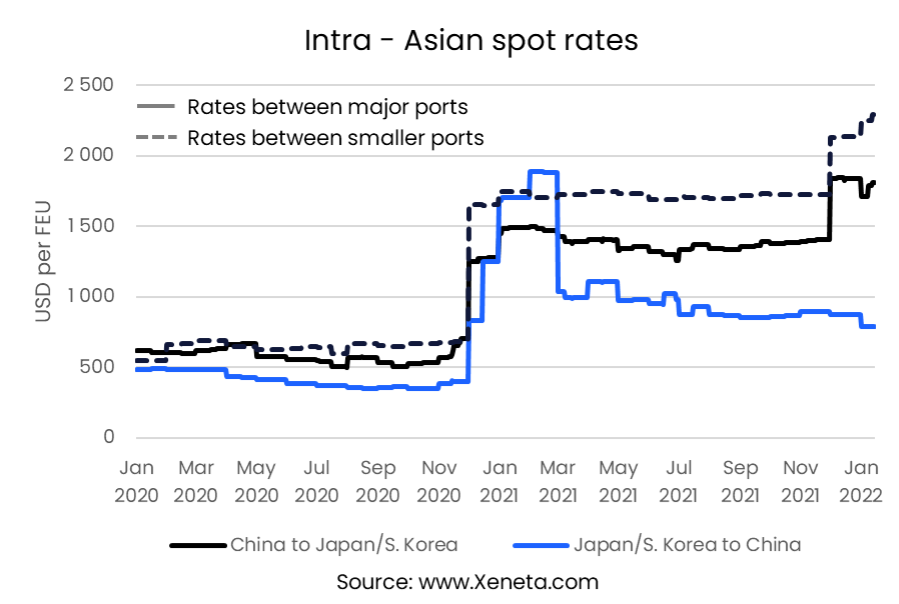 Though this is still more than 60% higher than the average in 2020, it is not an increase that leaves shippers scratching their heads desperately looking for alternatives.

Similarly, so far in 2022, the long-term rates are almost double as high on China to Japan/South Korea than the other way. Long-term rates from the past three months are currently at USD 2 150 per FEU for the former, while they stand at USD 1 000 for the latter.

In 2020 going between smaller ports from China to Japan/South Korea cost an average of USD 100 per FEU more than going via the major ports.

So far this year, the premium has increased to almost USD 500 per FEU, potentially opening up savings opportunities for shippers if they can secure land transport to the major ports.

It will be vital to have options if the first port of choice is unavailable to keep the goods moving, given the sudden lockdown situation of a few ports in China.
Source: Xeneta