Home / Shipping News / International Shipping News / Xeneta: Spot Rates From Far East to the South American East Coast have had the biggest fall in spot rates since the start of 2022 – down 35.1%

Xeneta: Spot Rates From Far East to the South American East Coast have had the biggest fall in spot rates since the start of 2022 – down 35.1%

The range of spot rates being paid has increased alongside the fall of the average, as the highest spot rates have not fallen. The highest rate from the Far East to SAEC still stands at USD 14 350, while shippers paying the lowest rates are forking out USD 6 470 per FEU, having fallen 44% since 2022.

The spread in rates across countries within the region is widening, as it has been in other trades. Japan stands out as the most expensive origin country when sending containers to the SAEC. At the start of the year, spot rates from Japan were USD 200 per FEU higher than the average for the whole of the Far East, whereas, on 1 April, it was USD 1 460 more expensive at USD 9 600 per FEU, having fallen 25%, compared to the 35% fall in average rates out of the region. 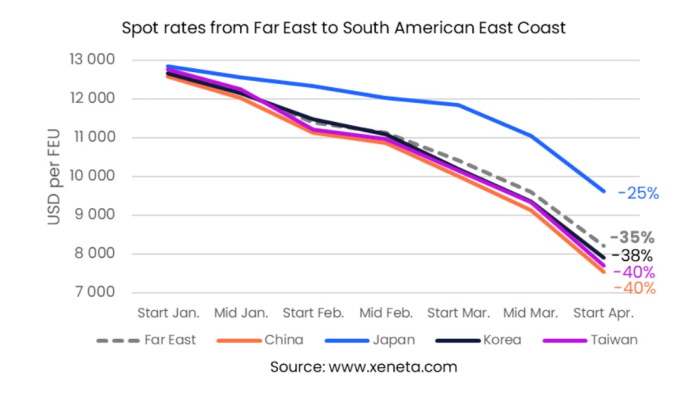 China remains the cheapest country, USD 680 per FEU lower than the Far East average, offering a USD 2 080 per FEU discount compared to Japan, a 630% increase from the discount on 1 January.

On the South American side, spot rates to South Brazil are USD 1 300 per FEU lower than those to the north. Going from the Far East to Northern Brazil costs USD 9 100 per FEU, compared to USD 7 800 for Southern Brazil. It costs USD 7 890 per FEU, going to Santos – Brazil’s biggest container port.

On top of these still high spot rates, some shippers also have to pay priority shipment fees between USD 2 900 and USD 7 400 per FEU.
Source: Xeneta