Members of the GEBCO-Nippon Foundation Alumni Team met with Japanese Prime Minister Shinzo Abe in Tokyo on Wednesday 18 September, to explain the concept that won them the $4m Shell Ocean Discovery XPRIZE for seafloor mapping and to talk about their shared vision to map the entire seafloor by 2030.

The GEBCO-NF Alumni Team, made up of international graduates of The Nippon Foundation/GEBCO Postgraduate Training Program at the University of New Hampshire (UNH), US, spoke with Prime Minister Abe about the technology that they developed, and how their model of international scientific cooperation can help to map the gaps that still remain in our understanding of the ocean floor.

They demonstrated their winning concept to Prime Minister Abe with scale replicas of the vessels that they used, as well as 3D visualisations of the data that they collected during the competition, and presented the Prime Minister with a copy of the General Bathymetric Chart of the Oceans (GEBCO) 2019 – the most recent version of the definitive map of the world’s ocean floor.

Introducing the team to the Prime Minister were Mr Yohei Sasakawa, Chairman of The Nippon Foundation, Japan’s largest private philanthropic organisation, which backed the team’s entry, and Mr Mitsuyuki Unno, Executive Director of the Ocean Affairs division at The Nippon Foundation.

Also present at the special event in Tokyo were Team KUROSHIO, a Japanese team who placed second in the competition. 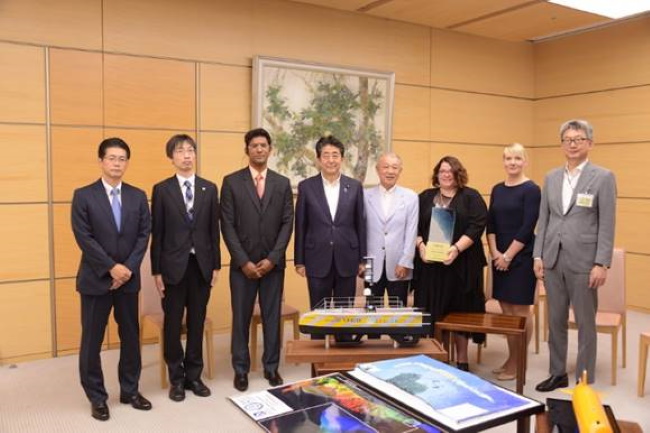 Sattiabaruth Seeboruth, an alumnus of the Class of 2017 from Mauritius, said: “Meeting with the Prime Minister and Mr Sasakawa and having them recognize our efforts is truly unbelievable. I know this will be a momentous moment in my life; it really is a once-in-a-lifetime occasion.”

Dr Karolina Zwolak of Poland, who graduated from UNH in 2013, hoped the meeting would “consolidate the cooperation between ocean mappers around GEBCO, alongside scientists from Team KUROSHIO and Japanese officials, to continue the global effort of mapping the ocean floor.”

The GEBCO-NF Alumni prevailed over teams from around the world to win the Ocean Discovery XPRIZE with their concept for fast, efficient, and cost-effective seafloor mapping. Their entry utilised the SEA-KIT Unmanned Surface Vessel (USV) Maxlimer, alongside the Kongsberg Maritime HUGIN Autonomous Underwater Vehicle (AUV) System, leveraging new and existing technologies to optimal effect. SEA-KIT was able to autonomously launch and recover the Kongsberg Maritime HUGIN AUV, rated to operate at depths of up to 4,500 metres in Round 2, and act as a communication link during the latter’s subsea survey operations.

The Team applied innovative approaches to data processing, with a newly developed automated work-flow, remote data processing, and a rapid data-to-information pipeline using web services to allow global access to data within the competition timelines. Masanao Sumiyoshi of Japan, from the Class of 2017, described how the team “achieved highly sophisticated bathymetric maps very quickly, and the diversity of backgrounds and cultures amongst the team drove us strongly to create our innovative solution.”

“This win for the alumni-led team is a reflection of the ongoing investment in capacity-building by The Nippon Foundation, and reflects the passion of this global network to find solutions to help map our oceans”, said Dr Wigley, Project Director of the training program at UNH and an alumnus of the Class of 2008.

The international character of the team saw members communicating with each other over video conference calls and emails, from offices and vessels around the world, to coordinate different aspects of their entry and process the data that they collected. Four months down the line, the team is still working together as they continue to develop aspects of their winning concept and build on the skills gained during the last three years.

The team’s SEA-KIT vessel USV Maxlimer was named after UNH Nippon Foundation/GEBCO Postgraduate Training Program alumna Maxlimer Anziani Vallee, who sadly passed away following a car accident in January 2017. Since being used in the team’s XPRIZE entry, the vessel has completed the world’s first international commercial uncrewed transit, successfully traversing the world’s busiest shipping lane to deliver a box of oysters from the UK to Belgium on 7 May 2019.

The Nippon Foundation is also jointly spearheading international efforts to map the entirety of the world’s ocean floor by the end of the next decade. The Nippon Foundation-GEBCO Seabed 2030 Project was launched by Mr Sasakawa at the UN Oceans Conference in 2017, and more than 100 organisations are now contributing to the goal of producing a complete map – vital to exploration and discovery, marine resource management, and climate science.