With activity in the ships’ recycling market still far and apart, the tables are turned, also among scrapyards. In a report this week, GMS, the world’s leading cash buyer of ships said that “for the first time this year, the top spot on the subcontinent demo rankings was relinquished as a beleaguered Bangladeshi market plummeted from first place down to last. Collapsing local steel plate prices have been the primary contributor to such a fall from grace and the BSBA (Bangladesh Shipbreakers Association) has tried to restrict all purchases for its members at the USD 350/LDT mark – and for this first week at least, all offers seem to be coming in at these painfully low levels. Notwithstanding, it remains to be seen if any sales will in fact take place at such bargain rates, given that both of the competing subcontinent markets (India and Pakistan) are inadvertently placed well ahead of Chittagong”, GMS said.

It added that “at present, many domestic yards remain booked with tonnage. As such, there is hardly the gnawing demand on fresh units that many had been hoping would push prices up once the 4 th quarter kicked into gear. Instead, Chittagong is facing a decline in prices that is in excess of USD 100/LDT from the peak levels seen earlier this year – and it may well be worth avoiding this market for the foreseeable future, whilst prices and sentiments remain so low. India on the other hand has at least stabilized of late, and it is the Recyclers in Alang who have usurped their Bangladeshi counterparts this week, by finishing as the top ranked market for the first time this year. Wrapping up the subcontinent locations is Pakistan, where interest and levels seem to be firming. However, the ongoing lack of fixtures leaves local levels undetermined, as most Recyclers remain hesitant to match the asking prices on the bevy of units being proposed. Finally, Turkish steel plate prices continue to make marked improvements, gradually regaining ground and approaching levels prior to the recent collapse. On the back of this improvement, local offerings have reportedly firmed as well. Overall however, there remains a dearth of units available for scrap at present, so it may be a while before we see any sort of activity at these lower levels, particularly as freight markets continue to perform admirably in the 4th quarter of the year”, GMS said. 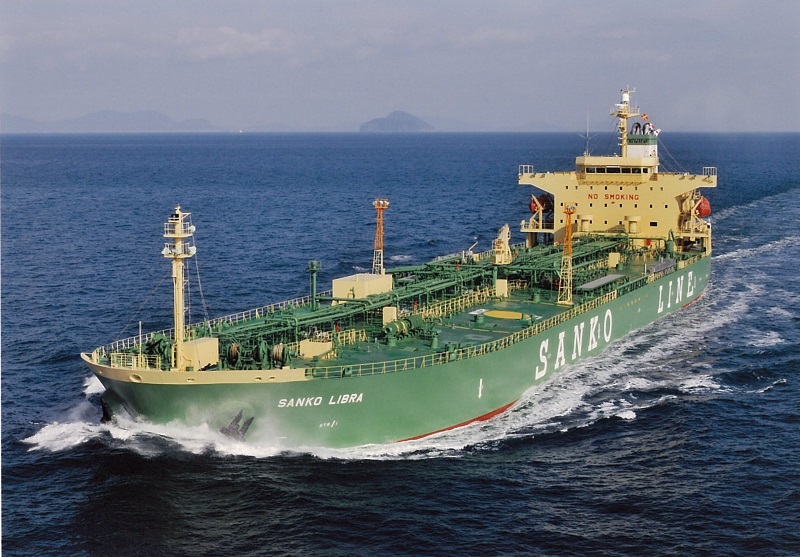 In a separate note, Clarkson Platou Hellas said that “the gloomy sentiment continues to hang over the recycling market as another quiet and lacklustre week comes and goes, almost a normality for the industry this year. Sadly, to add to the usual woes that affects the market, there has been further disruption this week in relation to India. Prime Minister Modi’s Government has been rocked by external auditors (USA based ratings agency) lowering India’s economic outlook from ‘stable’ to ‘negative’. This could provide a damning indictment for the Indian economy risking a prolonged slowdown in growth for the country and thus, giving a negative impact on the currency (USD against the Indian Rupee) and spreading across all sectors including the steel industry, where we possibly could see it start to affect the domestic ship recycling sentiment. This, as seen throughout this year, will continue to create difficulties for buyers in borrowing money from the local banks as the cost of converting the Rupee’s into dollars will become more expensive and therefore, affect price levels for tonnage. The general feeling is that the quiet tone now set in the market looks set to continue till the turn of the New Year”, the shipbroker concluded. 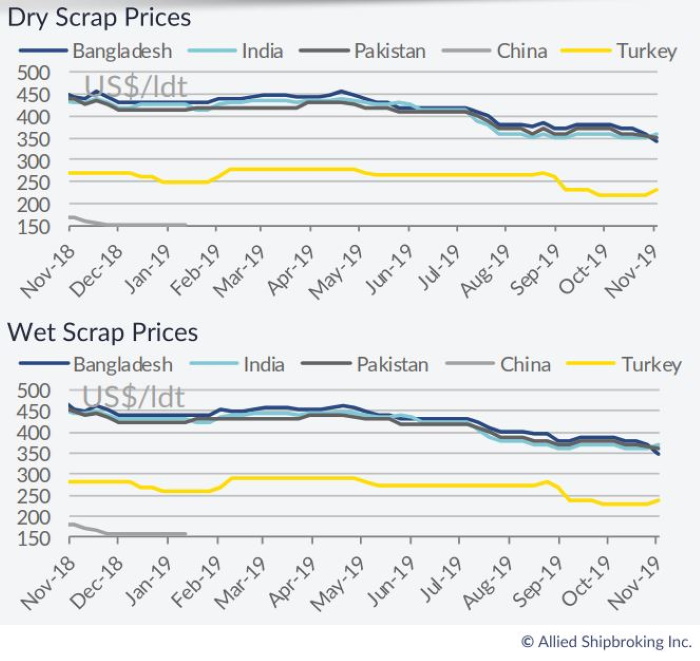 Allied Shipbroking added this week that “everyone has started to accept that ship recycling market will not rebound anytime soon with activity remaining for another week at subdued levels. It is worth mentioning though that 58 dry bulk vessels have been scrapped in the year so far, 11 more than what had seen during the same period last year. In contrast, activity in tankers cannot even compared to last year’s massive figures, when 159 units had been recycled. This year, due to the much improved freight market and the positive outlook, only 40 vessels had been sent to the breakers yards. The declining offered prices from Bangladesh, the only healthy destination in the year so far has further curbed any hopes for a recovery in the market to take place any time soon. On the positive side though, India showed some signs of revival after several weeks of relatively low interest and overall inactivity, with increased activity being noted, especially after the decline in Bangladeshi offered prices. In Pakistan, the situation has remained unchanged for another week, with most signs pointing to a lack of likelihood that better days are upon us at least up until the close of 2019”, the shipbroker noted.
Nikos Roussanoglou, Hellenic Shipping News Worldwide