Soybean demand in China in 2022 is expected to decline 6% year on year to around 90.8 million mt, according to a survey of 10 market participants surveyed by S&P Global Commodity Insights, as ongoing COVID-related restrictions and persistent negative crush margins continue to take their toll

Total soybean imports for 2022 have been further revised to 90.8 million tons, according to the survey, implying a reduction of 2.4% from previous estimate of 93 million mt.

For the May-December period, imports are expected to fall by 8.1% year on year to 62.4 million mt, according to the survey.

China bought 28.37 million mt of soybeans over January-April, down 1% year on year, according to data from the General Administration of Customs. 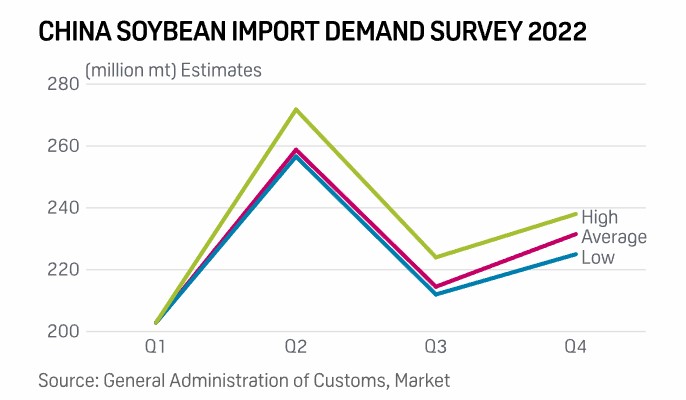 “The lowest demand estimate for the yearly import volume of soybeans is 90 million mt given the current slow pace of purchasing and continuous demand reduction for nearby months,” a Chinese trader said.

The operating rate of crushing plants is expected to average 67% in May and June, market sources said. This is also in line with the current slow pace of purchasing by Chinese crushers for prompt and nearby shipments.

Meanwhile, hog prices began to rebound last week, signaling an improved margin from the animal rearing sector. However, the price rebound was mainly driven by lower inventories led by capacity cuts in the hog rearing sector since early 2022. Hence, soybean meal prices will still be under downward pressure due to current lower hog inventories and subsequently lower feed demand in the third quarter of 2022.
Hog sector seen rebounding in 2023

The market expects recovering hog-rearing margins to encourage farms to replenish hog inventories in the fourth quarter of 2022, supporting feed demand in the first quarter of 2023.

Commercial crushers have been selling soybean meal this week for May-July 2023 shipments, with around 1 million mt sold.

“For deferred shipments, the gross crush margin turned positive at $17-$18/mt this week if crushers hedge against Jan 2023 soybean meal futures on the Dalian Commodity Exchange,” a Chinese buyer said.