Commodity purchases by China rebounded strongly in July. Imports of soy to coal and crude oil gained, signaling demand in the world’s biggest buyer remains solid even as a trade spat with the U.S. escalates.

The increase comes as the nation’s overall imports shrank less than forecast while export growth rebounded, signaling some recovery in trade before new tariffs threatened by the U.S. 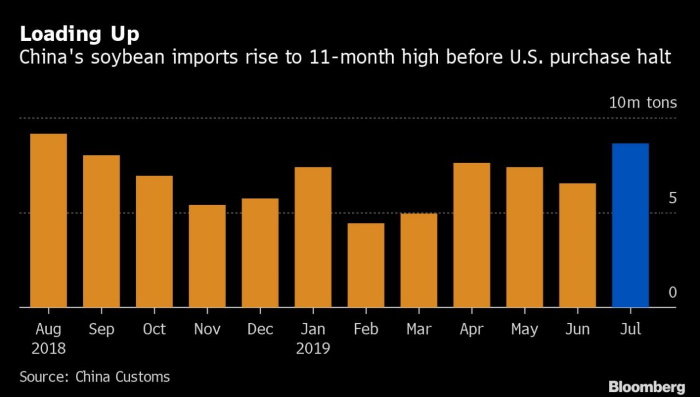 Soybean shipments jumped in July to the highest level in almost a year as Chinese crushers boosted volumes from South America, and before halting U.S. purchases. Imports rose to 8.64 million tons last month, from 6.51 million tons in June and 8 million a year ago. The strength may persist through August and September, which could raise inventories and slow future purchases.

Coal imports surged to the highest in six months as companies brace for tougher import controls in the second half. Shipments jumped 13% in July from a year ago to 32.89 million tons, handing authorities further impetus to clamp down as they aim to keep annual volumes at levels similar to last year’s.

The end of a peak maintenance period saw China’s crude oil imports recover in July as state refiners rebuild stockpiles. Purchases climbed 14% on-year to 41.04 million tons. Additional crude oil quota to private refiners should keep imports upbeat in the second half, according to a note from ANZ.

Iron ore sees yet more evidence of rebounding supply. Chinese imports soared to 91 million tons in July from 75 million a month earlier as output disruptions in Australia and Brazil ease. Purchases were also up slightly from a year ago.

Chinese buying of overseas copper concentrates rose to a record amid an ongoing push to boost domestic refining capacity. And while inbound cargoes of unwrought copper and products fell from a year earlier, they were up from the prior month as import premiums rose.
Source: Bloomberg