The outbreak of the novel Coronavirus has dented market sentiment and spooked markets around the globe. When China sneezes, we all catch the flu. This especially holds true for the commercial shipping markets, which remain heavily reliant upon China, both on the import and export side.

The virus spread coincides with the Chinese Lunar New Year (CNY), which marks the traditional low season for shipping markets. Thus, the virus’ knock-on effects have been hard to single out so far with next to no hard facts and figures to substantiate the matter. However, it does remain abundantly clear that an extended shutdown of China will temporarily cripple the shipping markets and hit hard on freight rates.

Every week that China remains “closed” will mark a slowdown of economic growth. Seaborne trade is closely linked to economic developments in Asia and the effects are already felt in several different ways.

While we are probably still in the early stages of the outbreak, it is evident that this health crisis will put a drag on Chinese economic growth in the first quarter of 2020, potentially taking a toll on annual GDP growth as well.

Consumer spending, associated with CNY celebrations, has certainly taken a substantial hit. This dip in consumption cannot necessarily be made up for once the virus has been contained. The lock down of large parts of the transport system has limited the consumption of oil, and refiners have cut crudes runs across the board. Demand lost because of this is unlikely to return to boost shipping demand after the crisis is over.

Advanced Economies’ imports of manufactured goods from China remains the main driver of container shipping with seven out of the ten largest container ports located in China. Wide-spread factory shutdowns results in a slowdown of manufacturing and industrial production. The intra-Asian container shipping market, the largest in the world, will be the first trades to feel the fallout from the coronavirus if intra-Asian supply chains are disrupted. Secondly, the long-haul trades to North America and Europe will be affected.

Extended blanking of sailing (meaning cancellations, ed.) by global liner companies have been the first measure taken to ease the pressure of low demand. But if goods are not produced at all, the short-term alternatives do not exist. Medium term alternatives will rise fast though, meaning alternative producers of the goods, just as we have seen as an effect of the ongoing trade war between the US and China.

Aside from stepping up their efforts to contain the virus, the Chinese government has also rolled out fiscal stimuli to combat the economic impact from the coronavirus. If judged by the share prices on the stock exchange, it’s working. But it is not limiting the spread of the virus nor is it boosting shipping demand at present.

Quite a few countries have already started to implement measures to curb the virus spread from seafarers. On 3 February 2020, Australia introduced a 14-day limit for port calls in mainland China and Australia, de-facto quarantining seafarers onboard the ships. Singapore have since then followed suit.

The virus illustrates just how dependent the world has become upon China with many supply chains deeply embedded into the country. Anecdotal evidence suggests that South Korean car manufacturers have started to reduce output due to supply shortage of Chinese goods.

Dry bulk shipping rates have extended its rout over the past two months, driven largely by seasonality and the newly implemented IMO2020 Sulphur Regulation, which has sent fuel oil costs soaring. Chinese imports of dry bulk commodities are the main driver for the dry bulk market and with a slowdown of industrial production in the short-term, the outlook for Q1-2020 is not shaping up particularly well. Freight rates will stay low, until Chinese merchants get back into the market for the usual commodities, such as grain, coal and iron ore.

The traditional dry bulk low season is usually in Q1, and the market tends to rebound post-CNY. Yet, with the coronavirus not under control yet, the slump will inevitably be more protracted. The Capesize index fell into negative territory on 31 January 2020 and has continued its descent to reach -133 index points on 4 February 2020. If large parts of China remain under quarantine, it is likely that earnings will continue to drop across the dry bulk segments.

China also holds a significant share of global shipyard industry. Data on newbuilt deliveries for January 2020, doesn’t seem to be impacted. But for the coming months, BIMCO expects to see an effect. This goes for retrofits of scrubbers, ballast water treatments systems etc. as well.

An oil tanker market turned on its head

Tanker shipping has certainly felt the heat in the past week, partly from the virus, but also with the lifting of US sanctions for a lot of Chinese-owned oil tankers. A lot of the oil tanker business is carried out in the spot market and freight rates have already seen substantial changes. 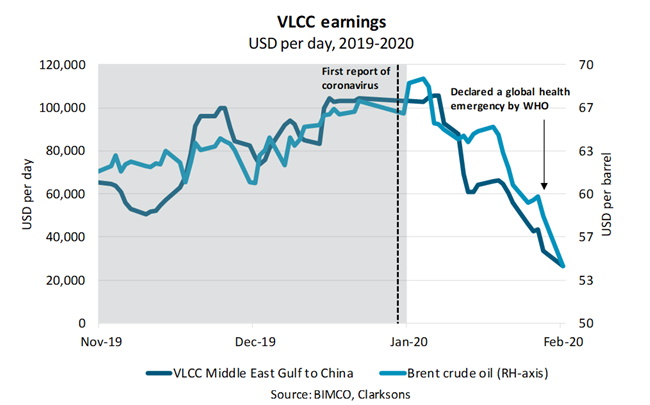 The outbreak has sent the oil prices on a rapid decline over the past month too and rumour has it that the Organization Of the Petroleum Exporting Countries (OPEC) is scheduling an emergency meeting in February to discuss production cuts in an effort to establish a floor under the dipping prices (Source: The New York Times).

How does it affect the US-China “Phase One” agreement?

In the 15 January-signed US-China “Phase One” trade agreement, China pledges to buy an additional USD 200 billion of US goods over a two-year period, of which a lot of energy and agricultural products will be seaborne. It remains questionable whether these purchases, will ever see the light of the day, and the virus outbreak could prove to be an additional hindrance to this Chinese pledge. White House economic adviser Larry Kudlow has said that the “export boom” of US commodities will be delayed as a result of the virus.

As the virus continues to spread, it remains immensely difficult to forecast the medium to long-term implications, yet the short-term consequences are clear: demand and freight rates are dropping.

With past epidemics, the markets have rebounded sharply in a matter of months, so the question is essentially about how long China will stay locked down in a quarantine?
Source: BIMCO, Peter Sand, Chief Shipping Analyst