The voluntary Smart vessel notation from DNV, provides a framework for assessing and visualizing digital vessel features and shows that a vessel is utilizing enhancements that improve operations, efficiency, and reduced environmental impacts.

“We are very honored that SHEN LAN TAN SUO was awarded the world’s first Smart notation from DNV,” said Mei Xianzhi, General Manager of China Merchant Heavy Industry (Jiangsu), at the presentation ceremony. “We thank DNV for their strong support during the project.”

“Digitalization and intellectualization are the general trends in technological development. Digital transformation is one of the development strategies for CMHI and we are committed to building the internal industry chain of ship repair and ship construction through smart operation and maintenance, while adding value to end users with services supporting the life cycle of ships,” said Mr Mei.

“We have enjoyed good cooperation over the years and believe there will be broader cooperation in the future. We both parties will further enhance and deepen cooperation together and provide safer, smarter, and greener products in offshore and cruise segments,” he concluded. 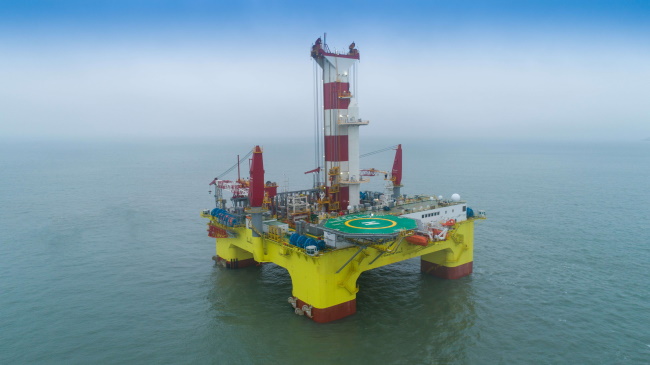 “Thank you for placing your trust in DNV,” said Norbert Kray, DNV Regional Manager for Greater China. “As the first in the world to apply our newly developed Smart notation, CMHI demonstrates that in in digitalization and automation they have both the foresight to look to future needs and the ability to deliver in practice. I would also like to thank the teams who to have successfully realized this groundbreaking notation and all of the involved partners for their contributions and cooperation.”

The Smart notation demonstrates that the data collection infrastructure of SHEN LAN TAN SUO, and its ability to ensure reliable and safe data collection from multiple systems onboard has been subject to quality assurance from an independent third party. The rig has also been awarded the qualifiers D-INF(P) for data-driven verification processes, and EEN, which recognizes solutions that provide improved energyefficiency and reduced harmful emissions, focusing on technologies that are considered cost, energy and emission-efficient for the operation of the vessel. 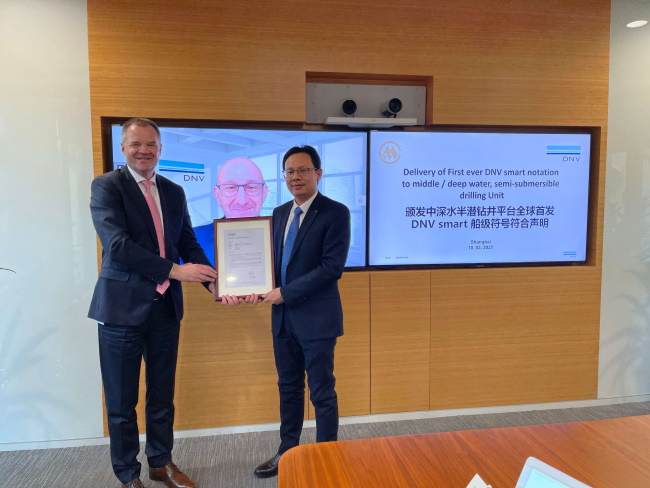 “Data streams from sensors and other sources of information are increasingly becoming an essential part of decision-making and used as input for monitoring, control, quality assurance, and verification,” said DNV’s Offshore Classification Director Geir Fuglerud, who joined the award ceremony virtually from Norway. “It’s of great importance for the industry that you started the digital journey. Because, while the future opportunities are almost endless, they must always begin with an innovator who is willing to take the first steps – as we see here with CMHI and SHEN LAN TAN SUO.”

The CM-SD1000 platform uses the R6 mooring system, with a maximum of 12 mooring points and an ultra-high strength anchor chain. It can be quickly laid in up to 800 meters of water and adapt to global sea operations. The platform utilizes an integrated multi-functional drilling system, which can improve the efficiency of conventional drilling equipment by nearly 30%. It is also equipped with a new independently developed intelligent operation and maintenance system, which can collect data on the operating status of the rig in real-time.
Source: DNV