Ship owners are closing their final deals of the year both in the newbuilding, but also in the S&P market, with bulkers in high demand. In its latest weekly report, shipbroker Banchero Costa said that “last week was rich of transactions in the dry bulk sector, especially for Handy and Supramax bulkers. Prices are slightly down from the previous done and more buyers are hunting for bargains before 2020 kicks off. The Ultramax “Ursula” 61,000 dwt built 2012 Imabari was sold to undisclosed for $16.8mln. A younger, but smaller Supramax “IVS Augusta” abt 57,800 dwt built 2015 Tsuneishi achieved $18.4mln from unknown Japanese buyers. Three Chinese built Supramax “Baoji” 56,000 dwt built 2013 Xiamen, “Tatjana” 56,000 dwt 2009 built Jiangsu Hantong and “Tenacity Bay” 56,000 dwt built 2008 Jiangsu Hantong were sold at $11.6mln, $9mln and $8.8mln respectively. Handysize bulker prices are under pressure, a 33,000 dwt “MS Atlantic” 2010 built Qidong Daoda was sold to Greek buyers for $5.25mln, whilst from same Owners a 32,000 dwt “MS Charm” 2010 Zhejiang Hongxin got $5.2mln. Worth noting the two bulkers both have SS/DD next year when BWTS needs to be installed. On tankers, the Suezmax “Ashkini Spirit” 165,000 dwt 2003 built Hyundai Samho was sold for $19,3mln, a fairly firm price, but in line with market expectations. An older Panamax tanker “Speed Pioneer” around 70,000 dwt 2000 built Namura (11,015 MT of LDT) has obtained $6.1mln which some 40% over current scrap level”. 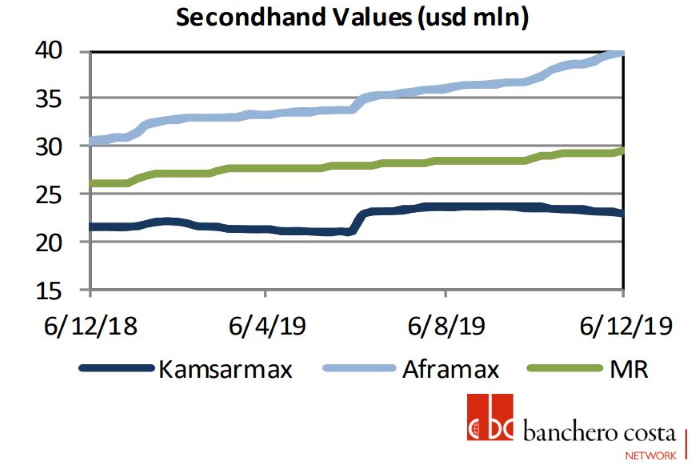 In a separate report, Allied Shipbroking said that “on the dry bulk side, things remained quite hot with several new transactions taking place this past week. It seems that the recent freight market improvement has enhanced buying sentiment once again, triggering more buying interest to search for any good opportunities out there. Given that a more stable freight market is now anticipated for 2020, it will be of little surprise if we start to see the current volume of transactions continue over the following weeks. On the tankers side, it has been a very interesting year thus far, with buyers clearly showing their preference in the oil products segment, a trend that has followed through this past week as well. However, the positive outlook has now spilled over to the crude oil market as well, with increasing buying interest emerge here too. It is expected that this trend will hold for now, with a fair flow of units likely to be changing hands before the year comes to a close”, said the shipbroker. 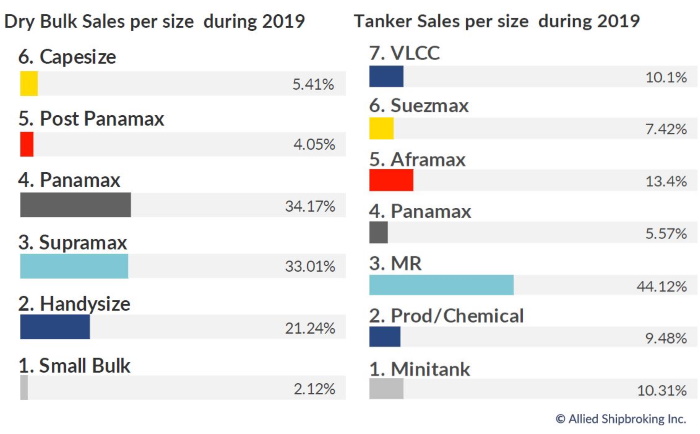 Meanwhile, in the newbuilding market, Allied said that “interest for new newbuilding orders seems to have slowed down this past week, though we were still seeing a fair flow of fresh transactions being reported in both the dry bulk and tanker space. On the dry bulk side, focus was given to Capes, with 4 new units being added to the global orderbook of the segment. The rising pattern of freight rates that has been noted of late, coupled by hopes for a positive and more stable 2020, has led several buyers to re-consider their newbuilding options, especially in the larger segments. Prices, however, remain an important barrier, as the secondhand market still offers fair bargains to be had compared to the prices being quoted by shipbuilders for a new order right now. On the tankers side, several units were ordered during this past week, added further to a fairly active month so far. Interest was split across different size segments this past week, reflecting the overall positive market outlook for the whole sector. Current freight earnings have triggered further investment interest, while at the same time there is a sense that we may well see prices show an uptick in the near future”, the shipbroker said. 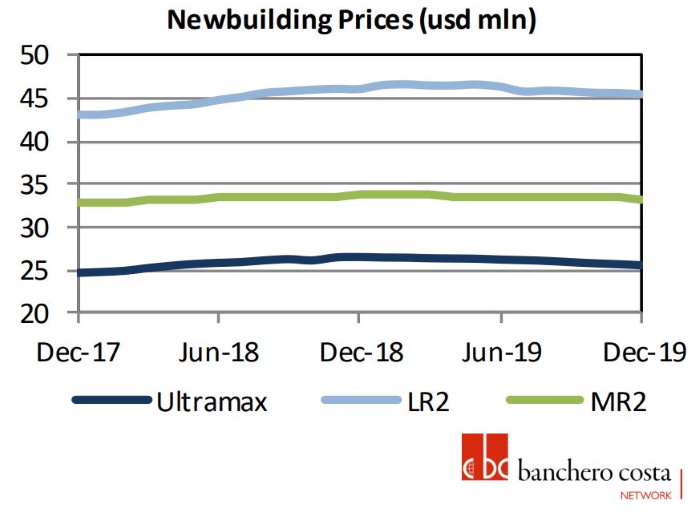 By contrast, Banchero Costa reported “a very active week for new building orders, especially for Chinese yards. Eastern Pacific ordered 2 x 208,000 dwt bulkers at Shanghai Waigaoqiao; the price is estimated to be around $68mln due to expensive specifications, dual fuel engines and LNG tanks located on deck. Again, Eastern Pacific is behind an order for 2 x 158,000 dwt tankers at GSI Nansha with dely February and June 2020, as the NewCastlemax above, the units will be dual fuel, the price is not reported, but it is estimated above $70mln. Sovcomflot ordered at Samsung for 2 + 2 x 115,000 dwt Aframax tankers Super Ice Class 1A for dely first half 2022, the units are believed to be dual fuel and the price around $79.5. Island Navigation ordered at STX 2 x 49,000 dwt MRs which will be delivered during the first half of 2022. In the gas sector, Pacific Gas commissioned the construction of 2 x 98,000 cbm very large ethane carriers at Jiangnan Shipyard. The vessels are the largest ethane carriers ever ordered, the price is around $120mln each and will be used for carrying US ethane to Europe. Jiangnan received an order by Petredec for 2 x 22,000 cbm LPG/ethylene carriers, deliveries are expected May and October 2022. Mitsui O.S.K. exercised the option for a second 18,600 LNG bunkering tanker at Hudong-Zhonghua. The price is $68mln, the delivery is set for April 2021; once delivered the unit will go on long-term charter to Total Marine Fuels Global Solutions and will especially assist the CMA-CGM’s dual fuel ships”, the shipbroker concluded.
Nikos Roussanoglou, Hellenic Shipping News Worldwide

Previous: Lithium Ion Batteries, a force to be reckoned with in vessel applications
Next: Tanker Market Rates 11/12/2019