From mid-2020, global container export volumes saw strong growth, and combined with increasing port congestion it caused supply chain challenges and historically high liner operator financial results which have been the norm since. In September 2022, however, container volumes dropped below volumes recorded in the same month in 2019 for the first time since mid-2020 and statistics just released by Container Trade Statistics have confirmed the trend. 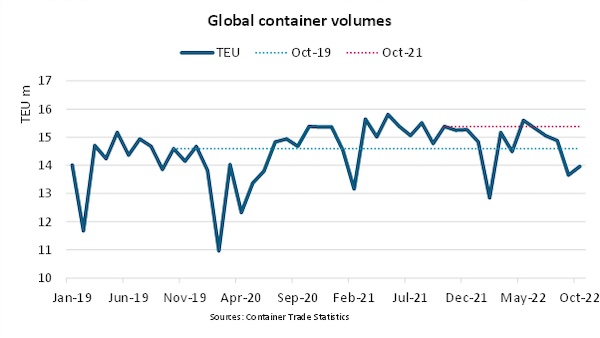 “Out of seven regions, five ended with lower import volumes in October 2022 than in October 2019. The Far East, Europe/Mediterranean, and North America regions combined import 75% of global container volumes and saw volume reductions of respectively 5.0%, 11.0%, and 0.4% versus October 2019,” says Niels Rasmussen, Chief Shipping Analyst at BIMCO.

The container fleet has grown 11.3% since October 2019, which helps explain why container freight and time charter rates have fallen so quickly during 2022, and particularly in recent months. The lower container volumes have also led to several service closures and an increase in blanked sailings. As a result, port congestion is improving quickly and no longer restrains supply to the extent seen during the past eighteen months.

“The global economy is expected to end 6.2% higher in 2022 than in 2019 while global container volumes appear likely to end only between 1.0% and 1.5% higher than in 2019. This underlines the effects of the cost-of-living crisis across the world but volumes in recent months also indicate that inventory adjustments are driving volumes lower,” says Rasmussen.

It now appears likely that global container volumes in 2022 will end approximately 4% lower than in 2021. Growth prospects for 2023 also appear weak due to weak prospects for global economic growth. At the same time, high contracting of new ships by liner operators during 2021 and 2022 indicates fleet growth of nearly 8% in 2023. All in all, 2023 is much more likely to see the beginning of a new normal rather than a reverse of the recent weakening of the supply/demand balance.
Source: BIMCO, By Niels Rasmussen, Chief Shipping Analyst