Petrofin Research issued its latest annual survey on the course of the Greek-controlled shipping fleet and the companies involved. Among the main conclusions are the fleet tonnage has kept on expanding, despite the fact that fewer companies are running all those ships. Despite a number of new entrants, overall the total number of shipping companies fell by 9 companies. This was the result of a number leaving shipping or merging, leaving in operation 588 companies compared to 597 last year. Although nothing similar to last year’s dramatic drop, the reduction in the numbers of Greek shipping continues for the 7th year running. Greek shipping companies are down by 9 to 588. 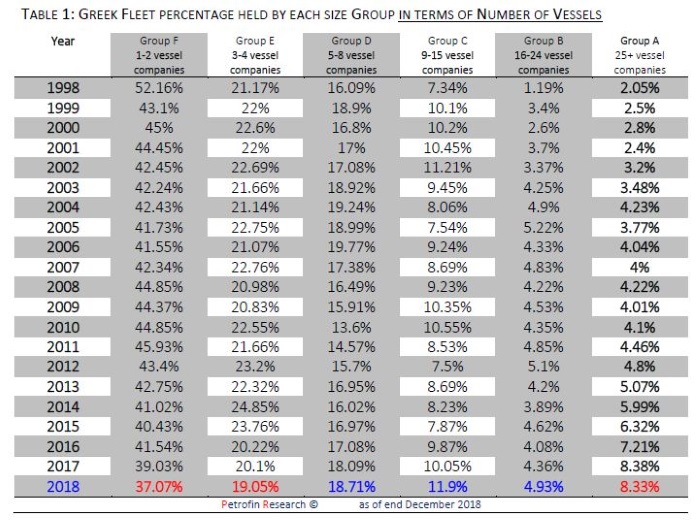 Percentage of the Greek fleet held by shipping companies in terms of the number of vessels they own. The two opposites – smaller and largest companies – are down in numbers. However, the two largest segments share has increased from 12.74% to 13.26%. PETROFIN RESEARCH ©

Another interesting development is the slight rise in age of the total fleet to 12.08 from 11.8 in 2017 and 12.19 years in 2016. As explained above, we note the slowdown of a) newbuilding deliveries and b) acquisition of relatively younger tonnage and c) positive market sentiment.

“As the fleet continues to expand it is interesting to observe the distribution of the fleet amongst the different company sizes. Especially this year, we had some noteworthy results as the number of companies operating top fleets (25+ vessels at 0- 9 years of age) are down by 8. As has been the case throughout the 21 years that we have been researching Greek shipping, although at first glance this looks like a decline in Greek shipping because of the fall in company numbers, the fleet itself is still expanding and remains young”, Petrofin said.

The large Container fleet (vessels over 20,000 DWT) shows 4 vessels more. We should note that there are now 34 companies operating large containers, which is the highest number since 2013. Although there are slightly more vessels, overall tonnage is down again this year to 23m DWT for the large ones. This reduction is reflected in the average container vessel of over 20,000 down to 62,775 DWT from 64,704.

In its analysis, Petrofin said that in order for Greek shipping to grow, it requires 3 necessary elements. Firstly, the commitment towards continued shipping investments of an immense size in order to enhance owners’ position, competitiveness and continuous investment in staff and systems. Secondly, shipping markets enjoying or promising sound returns on investment. Thirdly, the necessary finance and equity. It is self-evident that Greek shipping enjoys all three of the above elements. The changing prospects among shipping sectors are addressed by timely and sector investments and diversification, in which Greeks excel.

“The finance and capital aspects are more complex. In 2018, only $7.9 billion were raised globally by shipping via the capital markets, in shares and bonds, which is hardly sufficient to support the Greek growth story. This represents approximately 1% of the global shipping fleet value. As per our Petrofin Bank Research ©, traditional bank finance has been either contracting or stable over the last 10 years and as such, cannot be said to provide the stimulus towards investments. What provides the necessary finance balance is the availability of nonbanking finance via leasing, private equity funds and export finance, as well as increased capital committed by owners themselves and numerous investment funds. It should be noted that in Germany, for example, Cerberus is on their way to own over 1,000 vessels, mainly acquired from German banks, which have been clearing their decks from non-performing loans. In Greek shipping, there are no similar examples, save to say that interest in joint investments by funds has grown and these funds now consist of knowledgeable ex shipping bankers and analysts, who also have a keen eye to market opportunities. Private equity funds aim to generate investment returns of over 15% p.a.”, said Petrofin.

It concluded that “their investments require such returns, but it is doubtful if shipping can continue to provide them on a sustained basis at all times, as such high cost does increase the required breakeven rate per vessel. This is compounded by an increase in US interest rates. There appears to be a mismatch between the required investment (or finance) returns for vessels acquired by or in conjunction with Private equity funds and what the market may generate. Joint ventures do possess inherent risks of failure, especially in markets that fail, as history has shown. In addition, the higher cost of finance does inherently put shipping at risk. It will be interesting to see how private equity related transactions fare in the future. Short of a market or financial collapse, Greek shipping is expected to continue its growth and penetration across all shipping sectors in the drive towards larger fleet size, diversity and economies of scale”.
Nikos Roussanoglou, Hellenic Shipping News Worldwide