The IMarEST UAE Branch hosted a lady marine engineer, in an immersive experience sharing session, supporting the inclusion of women in the shipping industry, in an in-person meeting attended by the Middle East maritime fraternity.

Opening the stimulating event, with a video of Capt. Radhika Menon (the first woman to receive the IMO Award for Exceptional Bravery at Sea), Master of an Aframax Tanker, who rescued seven fishermen from a sinking fishing boat in tumultuous seas, in the Bay of Bengal in June 2015, NIKEEL IDNANI, Honorary Secretary of the IMarEST UAE branch, took a pragmatic approach to gender diversity, which he explained creates more skills, brings fresh ideas and a different point of view. But in practice, the path to achieving this vision is riddled with obstructions.

Taking the helm, the guest speaker Ms. NYARI NAIN, provided the barometer of equality and diversity reflected in her personal journey from a Junior Engineer to First Engineer, progressing to become what she is today, a Superintendent Engineer with Maersk Line, based in Mumbai.

She candidly revealed that the primary reason why women are not encouraged to enter the maritime industry are the perceptions that such jobs require skills more associated with men.

Traditionally, both families and society do not encourage women to choose seafaring as their career as historically the maritime industry has been male-dominated. She stressed the need to resist the tyranny of low expectations and deliberate over the predominance of inequality.

With ideas worth spreading, Nyari is a TEDx speaker and an Indian national level volleyball player who has been awarded the Young Seafarer achievement award by the Director General of Shipping, Govt of India. She was initially fearful of having to deal with sexual harassment while at sea and as a self-defence precaution, carried pepper spray which she thankfully confessed remains unused. However, she was not so lucky with discrimination on her first ship from gender stereotypes and had to go the extra mile to earn the trust and support from co-workers. Currently, the level of equality may not be perfect, but by embracing the talent and value of women, the industry has the potential to reset the cadence and become more open to change. As more women join the ranks in the shipping industry, they will act as catalysts for change and shape the future of shipping. 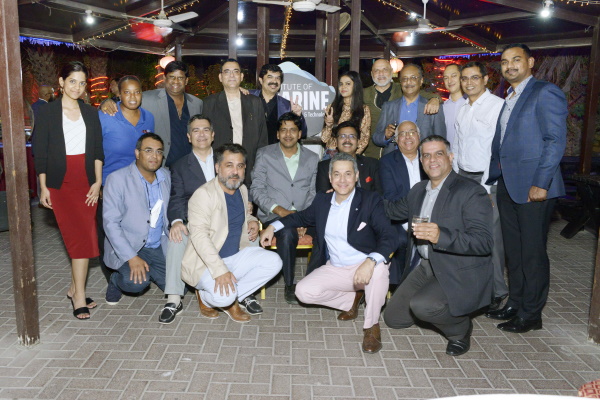 Nyari shared first-hand experiences on the challenges she faced as a woman onboard with references to the working conditions, attitudes, and social behaviour of multi-cultural crews.

Her story like journey kept the 55 people audience engaged and served as an inspiration to the women to follow and men to accept. Although women make up only an estimated 2% of the world’s maritime workforce, Nyari was encouraged by the laudable efforts of organizations such as the IMO which engenders a more inclusive environment and in particular offers support for women who are significantly underrepresented in shipping.

The chief guest for the evening Capt. SAHAR RASTI, the UAE’s first female ship captain and founder of SJR Group, joined Nyari on the stage at the Dubai International Seafarers Centre where she discussed thought-provoking challenges women face and her own journey and growth as a sea captain.

Bringing the role of the IMarEST into perspective, Nikeel referred to its mission to be the international organization of choice for everyone concerned with MARINE activities, irrespective of gender. He brought to light, the honourable platform of the IMarEST, which is to provide professional leadership, share knowledge and experiences based upon integrity, quality and most importantly fairness. And in that regard the IMarEST has several initiatives such as the Women’s Network and Gender Equality Partnership scheme which aims at making a difference globally to the role of women within the marine sector. Nikeel said, “To effectively alleviate prejudices and promote unity in shipping, diversity must be celebrated. Strength lies in differences, not in similarities. A lot of different components work in unison to make a smooth-running engine”.

The strong consensus was that the IMarEST UAE branch once again executed its fiduciary responsibilities to act bona fide for the benefit of the Middle East maritime stakeholders in shaping thoughts, empowering leadership, and demolishing the commonly held but inaccurate myth that Shipping is an industry stuck in the past.
Source: Institute of Marine Engineering, Science & Technology (IMarEST)