A spectacular upwards trend in global iron ore trade unfolded for almost two decades. But in the past couple of years signs of faltering have emerged, and prospects for 2020 are subdued. Following an article published by Hellenic Shipping News Worldwide on 11 March 2020, about the world’s rapidly expanding ore carrier fleet, this article looks in more detail at how iron ore trade has been evolving and expectations for the future.

Iron ore consumed by many of the biggest steel producing countries relies heavily or totally on imports. Among these importers, iron ore derived from domestic mines is now a significant input only in China. Vast quantities of high-quality iron ore are transported long distances by sea to the main importers from the two chief suppliers, Australia and Brazil, accompanied by volumes from South Africa, Canada, India, Sweden and other exporters. 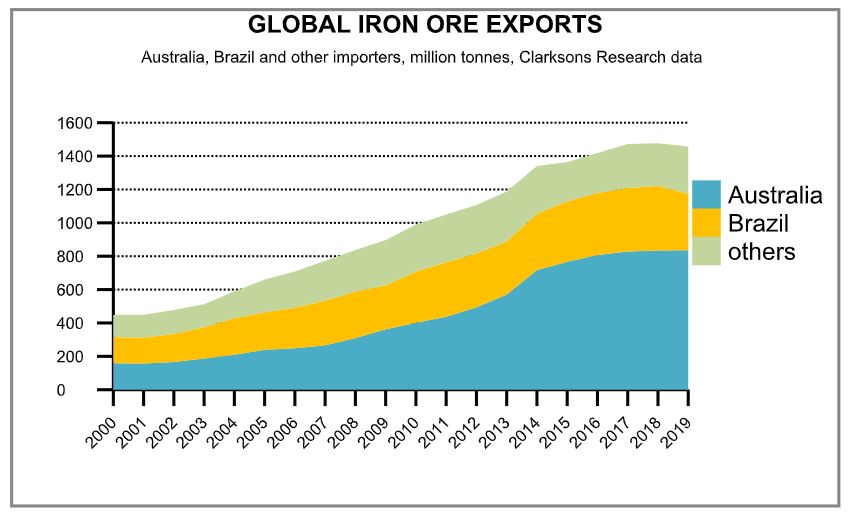 Rapidly rising dry bulk trade
Over the past couple of decades, iron ore has been the star performer among global dry bulk commodity trades. Iron ore trade growth has been much faster than seen in the other main dry cargo segments, and China’s ore import expansion was the principal driver.

Growth rates measured over a specific long period, using an individual base year and an individual final year, sometimes are distorted when there are large annual fluctuations in volumes. Using annual averages for 3 years at the beginning and end of the period often provides a more meaningful indication of the magnitude of longer-term change. The following statistics are based on comparing annual averages in the 2017-2019 period with those in the 1997-1999 period. These comparisons indicate broad growth patterns during the past two decades.

Based on this calculation method, and based on annual data compiled by Clarksons Research, global seaborne iron ore trade has grown by 253 percent over the past two decades. In the coal segment 177 percent growth was seen, while grain (including soya) trade increased by 122 percent. The extensive minor bulk trade segment was up by 94 percent. As a result, overall world seaborne dry bulk trade saw growth of 146 percent. The superior iron ore expansionary performance is evident.

Further calculations emphasise the overall trade growth magnitude and the extent of China’s contribution. Using the figures shown for annual world iron ore trade (416mt average in the late 1990s, and 1467mt average in the past three years), growth in the two decades was 253 percent. Within this increase, China’s imports grew by nearly twenty-fold. In terms of volume the global total rose by 1051mt and the largest part, 998mt, was attributable to China’s imports expansion, comprising 95 percent of total volume growth. 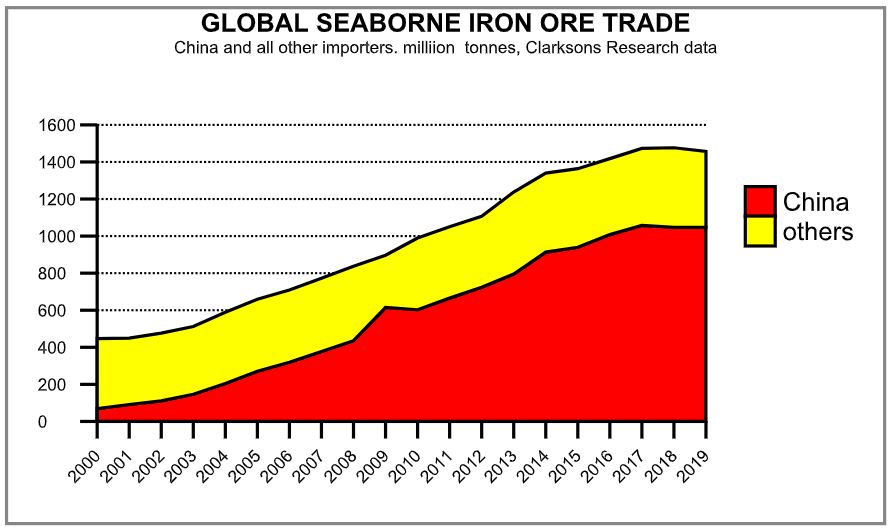 It can be seen that growth in the iron ore segment of dry bulk trade since the early 2000s has been mostly based on China’s rising requirements. A number of other countries remain major importers, especially Japan and European Union members as a group, together with South Korea. This ‘all others’ category, in recent years, comprised an average 28 percent of world imports. Positive developments among these have been limited and, in Europe and Japan, iron ore imports in the past few years were lower than previously.

China’s powerful uptrend
The emergence of China as a major iron ore importing country at the end of the 1990s and early 2000s, followed by a vigorous upwards trend, has been one of the world’s most remarkable dry bulk commodity trade developments in the modern era. Previously the largest iron ore importers were Japan and the European Union. China overtook both Japan and the EU in 2003-2004, becoming by far the world’s largest importer with over two-thirds of the global volume in recent years.

Is the China trend flattening?
An enormously powerful upwards trend in China’s iron ore imports during the past two decades is an accurate perspective. Yet distinct signs of a flattening trend have become visible since 2017. In that year seaborne iron ore imports into China totalled 1058 million tonnes, a 50mt or 5 percent increase from the 1008mt seen in the preceding year. The 2018 total was 1 percent lower at 1048mt, followed by a similar estimated 1047mt in 2019.

At the beginning of the current year several analysts expected imports growth to resume, perhaps slowly in 2020 as a whole. An alternative view suggested very limited potential for strengthening and even a possible decrease. The coronavirus epidemic emerging in recent weeks implies intensified negative pressures, but the consequences are difficult to predict.

Disruption of the trend will be caused by the possibly short-term impact (over several months?) of the covid-19 virus. Apart from this aspect, underlying longer term influences lead to a view of China’s iron ore imports remaining flat or even decreasing over a period of several years ahead.

One particularly significant influence is that China’s economy seems to be on a continuously slowing trend, accompanied by a shift away from manufacturing towards services, and from capital investment spending towards consumer spending. The implications for steel demand and production are profound: peak production may have been reached or is approaching, and a decrease is becoming more likely in the next few years.

In future years a greater proportion of steel may be produced by electric arc furnace mills using scrap as the principal raw material, while the dominant blast furnace/oxygen converter segment may also increase its scrap use. Together with the effects of a less steel-intensive economy, a typical result when a country moves into a phase of maturing economic activity, the potential for an upwards trend in iron ore imports to persist seemingly is receding.

Contrasting with this assessment, a positive view of prospects for China’s iron ore imports is suggested by one prominent forecaster, the Australian Government’s Department of Industry, Science, Energy and Resources (AGDISER) in its March 2020 quarterly bulletin. During the period ending 2025, according to this analysis, the China annual imports volume will continue growing at an average 1.9 percent compound rate. The prediction is based on a forecast of steel output increasing by an average 2.0 percent annually, supported by rising domestic consumption.

Positive signs elsewhere?
Among other iron ore importers, indications of strong positive trends are conspicuous only in a number of small importing countries. In two of these, Vietnam and Bahrain, ore imports growth has been vigorous in the past five years or so and there seems to be potential for further solid expansion during the next couple of years.

Prospects for the major iron ore importing countries of the European Union, Japan and South Korea – which received estimated totals of 101mt, 120mt and 75mt respectively in 2019 – point to flat or decreasing volumes. These importers are unlikely to see rising steel output, amid subdued prospects for economic activity, steel consuming industries, and trade in steel products. This expectation implies restraining influences on raw materials consumption and purchases of ore from foreign suppliers.

Looking at signs for all the importing countries together, it seems quite likely that there will be no further growth in global seaborne iron ore trade over the next few years. Distortion caused by the coronavirus epidemic will be prominent in 2020, with a decline in the world total a probable outcome, compared with last year. Even if trade volume then rebounds in 2021, there is a possibility that the longer term trend may be flat or weakening.
Source: Article for Hellenic Shipping News Worldwide, 24 March 2020, by Richard Scott, managing director, Bulk Shipping Analysis and visiting lecturer, London universities

Previous: EU Grapples With How to Support Member States’ Economies
Next: A World Economy in Strain