Oil Near $52 After Worst Week Since December on Growth Concerns

Oil slipped again, trading near $52 a barrel in New York after mounting concerns about the health of the global economy triggered the sharpest weekly price drop since December.

Futures retreated 0.5 percent in New York, following a decline of 4.6 percent last week. U.S. negotiators will resume talks in Beijing before new tariffs kick in on Chinese goods next month, seeking to end a trade dispute that’s weighing on a global economy already showing signs of weakness. The spat is damping appetite for risk assets among hedge funds, who plowed back into bearish bets on Brent crude in the week through Feb. 5. 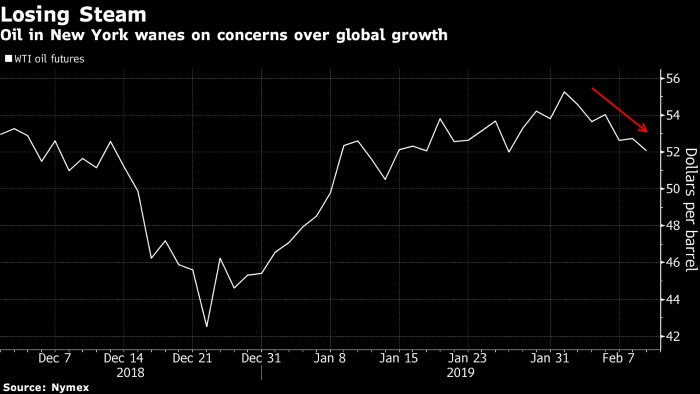 West Texas Intermediate oil has reversed course after the best January on record as a lack of progress on the trade war and growth warnings from Europe, Asia and elsewhere depressed the demand outlook. In more bearish news, American drillers added seven working oil rigs last week, bolstering concern that record U.S. production will undermine efforts by the Organization of Petroleum Exporting Countries and its allies to curb a global glut.

“We see prices at the moment at their fair value,” said Eugen Weinberg, head of commodities research at Commerzbank AG in Frankfurt. “There are a number of supporting factors as well as negative factors which balance each other out and keep the market in check.”

WTI crude for March delivery dropped 28 cents to $52.44 a barrel on the New York Mercantile Exchange at 10:11 a.m. in London after falling as much as 90 cents earlier.

Brent for April settlement gained 5 cents to $62.15 a barrel on the London-based ICE Futures Europe exchange. The contract climbed 47 cents to $62.10 on Friday. The global benchmark crude was at a $9.36 premium to WTI for the same month, the highest in almost eight weeks.

U.S. Trade Representative Robert Lighthizer and Treasury Secretary Steven Mnuchin are heading to Beijing for discussions before a March 1 deadline set by the U.S. to more than double tariffs on $200 billion of Chinese goods.

Investors are hoping that the world’s two biggest economies can get their trade talks back on track after U.S. President Donald Trump said last week that he’s unlikely to meet with his Chinese counterpart, Xi Jinping, before the end of the 90-day truce on March 1. Fears are intensifying that a deal won’t be reached, which could spur a tit-for-tat escalation that would make an already shaky global growth outlook even worse.

Short-sellers boosted wagers by 28 percent, the most since October, that Brent crude prices would fall, according to data released Friday by ICE Futures Europe Exchange. Net-longs — the difference between bets on an increase and wagers on a decline — nudged up by less than 1 percent.

A slew of reports due this week may provide fresh direction for oil markets. The Energy Information Administration and OPEC will publish data including their market outlooks on Tuesday. The Paris-based International Energy Agency and BP Plc will also put out reports containing their demand forecasts on Wednesday and Thursday, respectively.