Oil product stockpiles at the UAE’s Port of Fujairah dropped to a two-week low as of Sept. 19, posting the biggest week-on-week decline in four weeks on signs that shipping fuel is moving more quickly in response to lower prices, according to Fujairah Oil Industry Zone data published Sept. 21.

Total inventories stood at 22.008 million barrels as of Sept. 19, down 6.1% from a week earlier and the lowest since Sept. 5, the FOIZ data provided exclusively to S&P Global Commodities Insights showed. At this time last year, stockpiles were at a three-year low and have since expanded by 35%, according to the data from FOIZ.

Stocks of heavy distillates and residues used as fuel for power generation and marine bunkers dropped 6.3% on the week to 12.548 million barrels, the first drop in four weeks.

Robust demand for high sulfur fuel oil has primarily led to the drop in stockpiles in the latest week, a local trader said.

There has been an influx of Russian product moving into Fujairah, crowding out other suppliers and causing a backup in barging schedules. “HSFO volumes sold are substantial,” a Fujairah-based bunker supplier said, adding HSFO fixtures are much larger than LSFO, which is traditionally the biggest ship fuel sold at Fujairah. 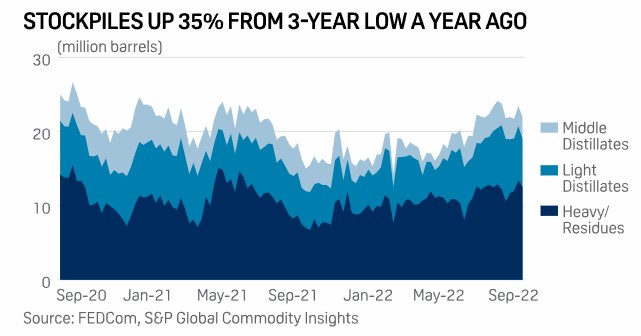 Bunker suppliers were offering LSFO deliveries within as little as two days, which was unusual, and they were offering product at lower prices to boost demand, with premiums narrowing, market sources said.

The Platts Fujairah-delivered marine fuel 0.5% sulfur bunker premium to the FOB Singapore marine fuel 0.5% cargo assessment slipped to average $28.79/mt Sept. 19-20, below the $36.51/mt during the week prior, according to S&P Global data.

LSFO bunker demand is expected to strengthen in September because suppliers expect some rebound as low prices attract some buyers, S&P Global has previously reported. In August, total bunker sales climbed 2.9% on the year. Fujairah is the world’s third-largest bunkering hub, after Singapore and Rotterdam.
Source: Platts