Report your presence and slow down for whales

‘World Whale Day’ held annually on the third Saturday in February, was founded in Maui, Hawaii, in 1980, to honour humpback whales, which swim off its coast. Today, the event serves a bigger purpose and reminds us of the need for continuous protection of the many large species of whale that are listed as “endangered” or “threatened”.

Protecting North Atlantic right whales in Canada and the US

The North Atlantic right whale is one of the world’s most endangered species of large whale. It was hunted to the brink of extinction by commercial whalers by the early 1890s and the US National Oceanic and Atmospheric Administration (NOAA) estimates that only 450 right whales remain. The North Atlantic right whale is found almost exclusively along the East Coast of Canada and the US. Each autumn some right whales travel more than 1,500 km from their feeding grounds off Canada and New England to their calving areas in the warm coastal waters of South Carolina, Georgia, and north-eastern Florida. Unfortunately, its habitat and migration routes are located close to major ports and often overlap with shipping lanes, making the whales vulnerable to collisions with ships. 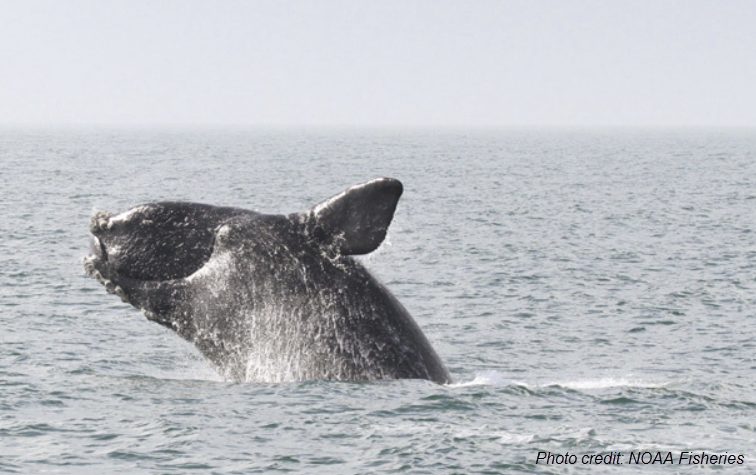 So – although the days of whaling are long gone – human interactions still represent the greatest danger to the North Atlantic Right whale. This has prompted both Canada and the US to implemented various measures to prevent ship strikes during times when North Atlantic right whales are likely to be present.

In 2019, Transport Canada implements the following measures in the Gulf of St. Lawrence:

Fixed speed reduction zone:From 28 April to 15 November 2019, all ships 20 m in overall length or more must travel at 10 knots or less in the Western Gulf of St. Lawrence, in a defined area near the Anticosti Island.
Temporary speed reduction zones: Speed restrictions can be activated in two shipping lanes, north and south of Anticosti Island, when a right whale is spotted in or near the lanes. Each speed restriction will be in force for 15 days. If right whales are not seen with surveillance flights during the 15-day period, the speed restriction will be lifted at the end of the period. Our understanding is that compliance with any temporary speed restrictions in force is mandatory.
For details, including visual maps of the speed reduction zones, please visit Transport Canada’s website “Protecting North Atlantic right whales from collisions with ships in the Gulf of St. Lawrence”.

Every year, NOAA implements the following measures along the US East Coast:

Mandatory ship reporting: Ships of 300 gross tons and above must report to a shore-based station when entering two key right whale habitats: one in the northeast off the coast of Massachusetts and Cape Cod (year-round reporting required) and one in the southeast off the coast of Georgia and Florida (reporting required between 15 November and 16 April). See NOAA’s “Mandatory Ship Reporting System Placard”.
Fixed speed restriction zones: All ships 65 feet (19.8 m) in overall length or more must travel at 10 knots or less in certain locations, referred to as seasonal management areas (SMAs), along the US East Coast. See NOAA’s “Compliance Guide”.

• Temporary speed reduction zones:Voluntary 10 knot speed restriction zones, referred to as dynamic management areas (DMAs), may be established at short notice when right whales are sighted in a certain location. Active DMAs will be announced by NOAA through its customary maritime communication media.
• Recommended shipping lanes: Recommended shipping lanes have been established within Cape Cod Bay (January through May) and in right whale nursery areas off Georgia and Florida (November through April). See NOAA’s “Recommended Routes leaflet”.
• Voluntary seasonal ‘Area To Be Avoided’ (ATBA): An ATBA has been established in the Great South Channel and ships of 300 gross tons and above are recommended to avoid the ATBA from 1 April 1 to July 31 every year.

It is a ship operator’s responsibility to ensure that ships’ crews are familiar with the risk of ship collisions with the endangered North Atlantic right whale. We recommend Members and clients with ships trading along the US East Coast and in Canada’s Gulf of St. Lawrence to:

• Make sure crews receive basic training in the precautionary measures to be taken when operating in areas where right whales are known to be present, including identification and reporting. Learn more about the appearance and behaviour of North Atlantic right whales from NOAA’s species directory.
• Check for active speed reduction zones. Temporary speed reduction zones can be activated at any time of the year if a right whale is confirmed to be in a certain location.
• Encourage Masters to reduce the ship’s speed to 10 knots or less while transiting areas with voluntary speed restrictions (DMAs), or alternatively route around the area, and to post lookouts that are familiar with spotting right whales.
• Review, and update as necessary, ships’ procedures for pre-arrival reporting to make sure they are in line with the provisions of the US Right Whale Mandatory Ship Reporting System.
• Collect information about right whale sightings from all available sources. This enables crews to conduct the most prudent voyage planning to/from ports in areas where right whales may be present. A Whale Alert app for iPad and iPhone is also available.
• Instruct crews not to intentionally approach within 500 yards (460 m) of a North Atlantic right whale as this is a violation of US federal law. Other ships in the area should be alerted when a right whale is sighted.

Violations of the mandatory North Atlantic right whale speed restrictions can lead to civil administrative penalties being issued against the ship.

There are currently no active speed reduction zones in Canada’s Gulf of St. Lawrence.

Eight of the ten fixed mandatory speed restriction zones (SMAs) along the US East Coast are active, the only exceptions being the Northeast SMAs “Off Race Point” and “Great South Channel”.

In addition, NOAA has activated a voluntary speed reduction zone (DMA) 26 nautical miles south of Nantucket, Massachusetts, to protect an aggregation of 19 right whales that were sighted in this area on 17 February 2019. The DMA is currently active through 5 March 2019 and mariners are requested to route around this area or transit through it at 10 knots or less.
Source: Gard